April 5, 2021, 6:24 AM · To mention the name of Louis Spohr (1784-1859) to today’s musically sophisticated public might result in the inevitable question: “Never heard of him….who is he?” Unlike his contemporary and peer Niccolò Paganini (1782-1840), the work of Louis Spohr as violinist, composer, conductor and teacher left its mark on the history of music in a less sensational but indisputably influential way. 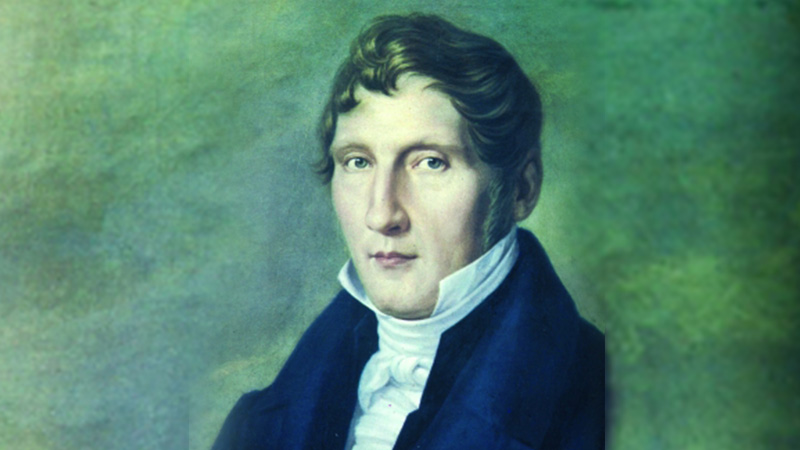 Violinist Louis Spohr.
Born on April 5th, 1784 in the North-German city of Braunschweig, to musical parents, the young boy showed early progress on the violin and soon won the attention of the local community. His father sent the 14-year-old boy away from home to embark on the life of an itinerant musician.

His first journey resulted in near-disaster, and the child returned home penniless, traveling by foot, from Hamburg. Safely back home, young Louis soon devised a new plan and, as it proved, a fruitful one. Knowing of the Duke of Braunschweig’s habit of taking a morning walk in the palace garden, he took his chance and handed over a small petition asking for further schooling or a position in the Duke’s orchestra. After a stimulating period as orchestral musician, that included playing several of his own compositions, Spohr was invited to receive further tuiton.

Through his first teachers, the French Dufour and the Braunschweig concert master, Charles Louis Maucourt, Spohr was already in contact with the French school. His wish to study with Viotti, the most important figure of the Parisienne school, was not granted since Viotti had already settled in London as a wine-dealer.

His two debut performances at the Leipzig Gewandhaus, in December 1804, were very successful and received an enthusiastic review by the critic of the “Allgemeine Musikalische Zeitung”; based on a strong technical foundation, “the spirit which he infused into his playing – the flight of fantasy, the fire, the tenderness, the intimacy of feeling, the fine taste."

His now-most-famous work, the Violin Concerto No. 8, created a sensation at its premiere at La Scala Milan on September 27th, 1816. It is written in the spirit of a song, combining a cantabile quality with drama and including the only example of a traditional solo cadenza in Spohr's concerti. The orchestral accompaniment was intended as “a quite-easy accompaniment for Italy."

From 1805-1812, Spohr occupied the concertmaster’s chair at the court orchestra of Gotha, and from there he was lured away to become concertmaster and conductor at the “Theater an der Wien” (1813/1814).

In 1822, Spohr took over the permanent position of musical director to the Elector of Hessen-Kassel (a post initially offered to Carl-Maria von Weber). He retired in 1857 and died in Kassel on October 22nd, 1859.

During his travels, Spohr became acquainted with many of his celebrated musical contemporaries. In his autobiography “Die Selbstbiographie von Louis Spohr” he gives an lengthy account of Beethoven's conducting and, referring to a performance of Beethoven's 7th Symphony, he concluded, “The performance was absolutely masterly, despite Beethoven’s uncertain and often ridiculous conducting."

In 1816, Paganini returned early from a visit to Trieste in order to attend recital by Spohr in Venice. The next morning, Paganini paid a visit to his colleague but excused himself from performing in private: "...he said that his style was calculated for the general masses and never failed in its effect; but if he were to play something for Spohr, he would have to adopt a different style and he was now far too little in practice for this."

Fourteen years later, Paganini, his European fame firmly established, visited Kassel for two concerts in which he performed his newly-composed 4th Violin Concerto. Both men greatly respected one another, Paganini presenting Spohr with a wax portrait relief of himself and Spohr inviting Paganini to Wilhelmshöhe, where they attended a performance of Spohr's opera "Faust." However, Paganini’s playing was so completely different from Spohr’s style and personality that the latter left no favourable comment: "In his compositions and his style of interpretation there is a strange mixture of consummate genius, childishness, and lack of taste so that one is alternately charmed and repelled.”

His position in Kassel allowed Spohr to devote more time to his other musical and organizational talents. He attracted a remarkable level of singers to the Kassel opera and his orchestra of 55 musicians became one of the largest in Germany. He also took care of social matters for his musicians and established a payment system as well as a fund for dependent allowances.

It was his vision to begin promoting the German opera repertoire of Weber and Wagner that prompted his staging of “Der fliegende Holländer” (1843) and “Tannhäuser “ (1853), giving an important impetus to establish the work of Richard Wagner.

Spohr also staged operas by local composers and produced his own operas and oratorios with international success becoming, alongside Mendelssohn, the most popular German composer in England. With several choirs at his disposition, including the Caecilienverein founded by him in 1822, he regularly programmed oratorios and most notably revived the Bach St. Matthew Passion in repeated performances over the years.

As a teacher, he published his Violin School (1832) that became a standard in Germany. From his Kassel violin school emerged over 200 pupils, many of them holding positions in European and American orchestras.

The “Louis Spohr – Gedenk- und Forschungsstätte – Museum der Geschichte des Violinspiels” of the “Internationale Louis Spohr Gesellschaft” (founded in 1908) exhibits a rare collection of Spohr memorabilia, although in 1934 great parts of the collection were destroyed by order of the mayor of Kassel. Among many string instruments, including a 200 years old pochette, there is a piano by Streicher, from Spohr's Kassel home, as well as a Naderman harp from around 1810, similar to those performed on by Spohr's first wife, Dorette Scheidler (1787-1834).

Spohr's concerti for clarinet demanded technical inmovations of the instrument, as described by Spohr in his preface for op. 26. Unable to perform one of Spohr's concertos on his instrument J.S. Hermstedt declined an offer by Spohr to re-write his music and, in stead, ordered several adjustments made to his own instrument, which is now exhibited in the museum.

Another jewel of the museum is the above-mentioned wax portrait relief of Paganini, attributed to David d’Angers. The visitor feels comfortable in the pleasant surrounding of paintings, instruments, batons, autographs, scores and letters of Spohr, Paganini, Schumann, Lipinski, Joachim, Wilhelmi, Karl Marx et al. as well as the fitted furniture from the working room of Louis Spohr.

For more information on Louis Spohr:

An increasing selection of compositions by Louis Spohr is being recorded and made available on CD. A set of all 15 Violin Concerti with Ulf Hoelscher, Rundfunk-Sinfonieorchester Berlin, Christian Fröhlich is available from cpo. A useful internet resource for searching recent releases is www.jpc.de.

April 6, 2021 at 04:51 PM · The violin part of the Nonett is more difficult than that of the Schubert Octet and (of course) that of the Beethoven Septet, but Raymond Cohen sight read it without a problem. The violinist who tried a day or two later, despite having had the advantage of having heard Cohen do it, made a mess of it. Indeed, I felt glutaraldehyde and I had something in common.

By the way, didn't Spohr tell Rode that he had made him his model for playing?

April 6, 2021 at 07:23 PM · Didn't Louis Spohr also invent the chinrest, which is one of the biggest leaps in violin playing and setup? It seems like a glaring omission, given that his little invention is on virtually every instrument in the world today.

April 6, 2021 at 08:44 PM · Spohr's autobiography is freely available on www.gutenberg.org and makes an interesting read. He was very ambitious and practiced really really hard to become a/the world-class violinist for his time; Rode was his big example.

April 7, 2021 at 01:14 PM · Spohr's autobiography is indeed interesting; also entertaining, at least the early chapters (the end is written by relatives--his second wife I believe--after his death and is VERY boring). Too bad the translation on the Gutenberg Project is really bad (translating "Es Dur" as "Es Major" among many other sins*); I read it in German many years ago and Spohr's writing is perfectly fine.

I like the episode when he had his precious violin stolen off his coach somewhere in Russia for example. His description of the trip to Italy (including a long hike across the Gemmi Pass in Switzerland--you can still hike it nowadays if you want) is also highly entertaining.

It is important to keep in mind that Spohr was not just a violinist. He was an all-round musician of the kind that don't exist any more in classical music: Virtuoso, composer (not just of violin music!!), conductor, teacher.

* For those who have forgotten their German the correct translation of "Es Dur" is "e flat Major".

April 7, 2021 at 02:03 PM · This is a wonderful article and truly informative. (Who knew that Viotti became a wine dealer??) Thank you so much for sharing this with us.

April 8, 2021 at 01:59 AM · Who knew that Viotti's wine business eventually failed (other than the person who wrote the Wikipedia article about him)?

I found out also why Ferdinand David is not mentioned by name in this article: The reason is that he was merely one of Spohr's pupils, Joachim being, in turn, a pupil of David's.