December 23, 2022, 8:54 PM · We’re back. And it’s no small miracle, considering what the world has been through. Although much of life has returned to a sense of normalcy that tries desperately to resemble the Before Times, the truth is that the unfurling of that path, so tightly bound for nearly three years, is just beginning to reach many places for the first time for a host of reasons: Patterns have shifted, budgets have shrunk, costs have soared, vendors have closed, and fears, well-justified, still exist.

The homeless shelters, facing so many of these challenges to serve the immediate needs of their clients, have not been quite ready to welcome guests. But as that welcoming day came nearer, we starting making plans with the shelter agencies. We began our return by bringing Music Kitchen’s first in-person performance to Holy Trinity Lutheran Church’s HUG soup kitchen program, which has been providing meals for several months now. Music Kitchen is the program that I founded in 2015 to bring classical artists into homeless shelters in the New York City (and now Los Angeles) area. 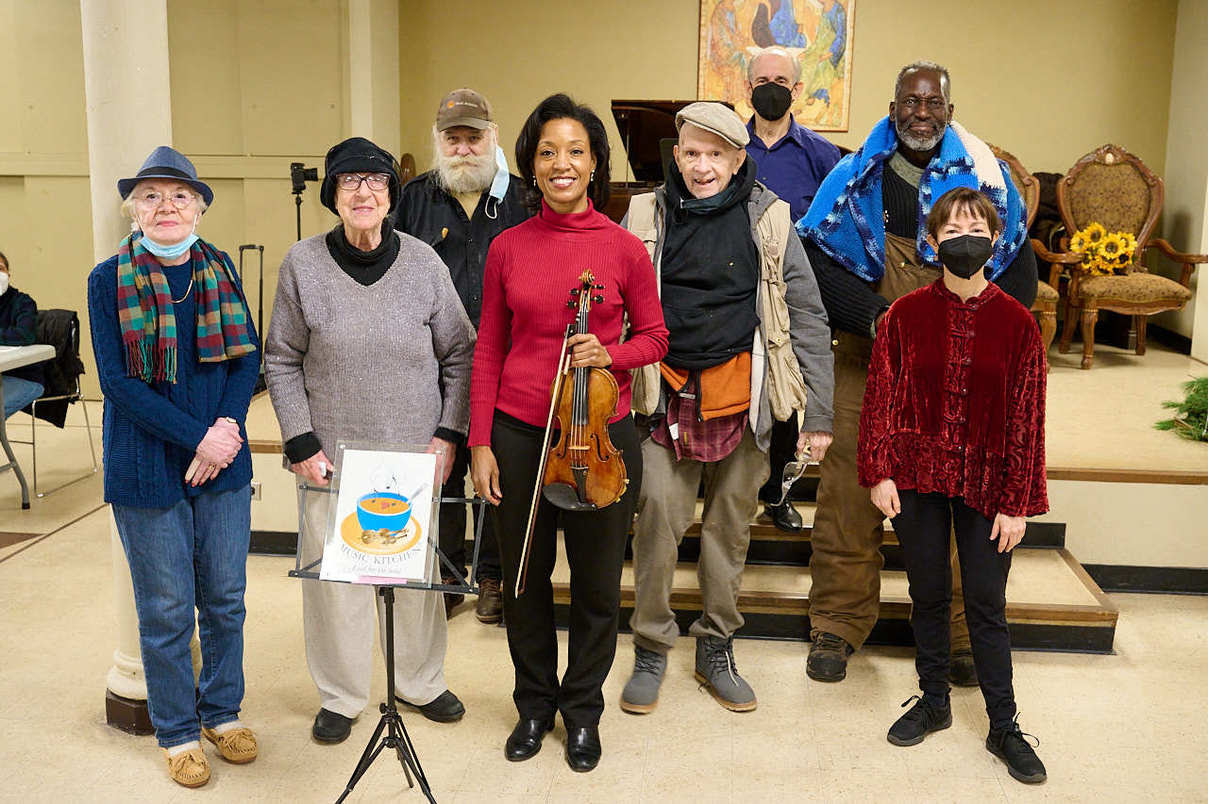 At our Dec. 10 concert. Photo by
Gregory Routt.

Back in May, we were thrilled to share our Carnegie Hall Forgotten Voices performance not only with the general the public, but with nearly 50 shelter clients who came to the hall to see it.

On Dec. 10, in order to venture back into our traditional musical offerings - in our ad-hoc concert halls - I decided to share a program of music by Mozart and Bruce Adolphe, with composer Bruce Adolphe himself narrating, and with pianist Marija Stroke.

The same worries I used to have in the early years of Music Kitchen were hovering close by - what will this be like on the other side of a pandemic shutdown? Will they still want these concerts? Will it still work?? Are we an unwanted disruption to their impending lunch?

As we were warming up and checking the piano, several listeners greeted me with warm familiarity, remembering me from several years past. One older gentleman said with a sense of comfort which radiated back to me, evaporating some of that concern, "I said to myself, Kelly’s here."

Standing in front of the full audience once they all arrived, my mind was struck by how it felt like just yesterday that I was here, saying the familiar lines of introduction, anxiously awaiting their response. And yet at the same time, I marveled at just how long this unexpected delay had been.

The centerpiece of this first program was Bruce’s work Einstein’s Light, inspired by Albert Einstein for what was to have been a film about his imaginative explorations and thought experiments on what became some of his most pivotal discoveries.

Though the film was ultimately never made, the concert piece which was conceived as its score is its own exploration soundscape. The music needs no visual companionship and was beautifully recorded by violinist Joshua Bell. Since Einstein was an amateur violinist, the piece stems thematically from the Mozart Violin and Piano Sonata No. 10 in B flat. That is where we began our program - by playing the first two movements of that Mozart.

The audience listened with rapt attention: quiet, still, and focused on us. After the applause at the end of the first movement, I spoke my first invitation of the day for anyone to share their impressions. A lady at the back of the room immediately spoke up. I had noticed her during our rehearsal; she was listening intently then as now. She said, "It was so beautiful, so elegant and calming." She later asked, "Is everything Mozart wrote so calming?"

I explained the classical period style of writing, where an elegant melody often sits atop an Alberti type accompanying line. Since Mozart, like all of us, was a product of his time, he wrote in that style, but with his own unique voice. I went on to demonstrate how he got into trouble for pushing the limits of the style of the day with his so-called "inhospitable" minor theme of the 40th Symphony, which I played a bit. A man close to us said what a comfort this music was to him. With all of this profound feedback reassuring my ears, my old concerns vanished again, as always. I told them that yet more calming music was in store. We played the slow movement, and Marija shared a very personal feeling about the music and what the themes mean to her: a window into a love duet.

We then began the "Einstein’s Light." The first movement is the most active of all, rolling from the Mozart’s 3rd movement Rondo theme into more modern and angular rhythms based on 11 beats instead of the more old-fashioned symmetrical meters. I asked Marija to demonstrate the 11/16 motor which excitedly drives the movement forward. A man to our right said it sounded like someone was being chased. Bruce encouraged him, saying that that was a perfect assessment of what was originally a scene portraying Einstein in fervent pursuit of an idea that popped into his mind. To a lady on our left, she was reminded of Turner Classic Movies.

We then moved to the more languid and dreamy next three movements. With the first of them concluded, a man who had been quiet up to this point, who upon appearance, many a classical music presenter would not recognize as their target audience, raised his hand slightly and said, "I’d like to say something..." He continued with such deliberate stillness and gravitas, that I wasn’t really sure what was coming next. "You’d have to have no heart not to be touched by this music," he said. "It’s very soothing and painful at the same time." His statement certainly took my breath away, and that feeling seemed to similarly capture the room. "Wow," I said, and I thanked him for his powerful words.

We had already been together for 50 minutes, and I did not want to impinge on their lunch. So I quickly introduced the last piece of the afternoon, as "story time for adults- or anyone, really!" Then we dove right into Bruce Adolphe’s The Nightingale, an adaptation of a story by Hans Christian Anderson. The story describes an Emperor who enjoys the daily song of a nightingale. He first tries to tether the nightingale so that only he could enjoy it, then moves on to trying to replace it with a digital bird.

Both schemes go awry, ringing as familiar golden goose-like allegories of those blinded by greed, but unfolding in comical ways. The audience remained with us throughout, so much so that when a man in the audience started talking loudly to himself, he was clapped and shouted down by many throughout the audience. Our audience wanted to laugh and to be transported, and by the delighted permanent smiles on their faces, we brought not just the story to life, but a piece of all of ourselves too in this beautiful, shared experience.

At the end of the performance, there was no rush to get on to lunch. Instead, there were rather deliberate expressions of gratitude, lead off by the lady in the back. "Thank you for coming back," she said. "This was so soothing, and we really appreciate you taking the time to do this."

Later, as I was walking around the room greeting listeners and collecting their notecards, the man who had made such a touching statement earlier handed me a card. "I grew up listening to classical music - my father would make me. I remember Nessun Dorma," he said. "I didn’t like classical music then, but I like it now."