May 26, 2021, 4:15 PM · Violinist Tessa Lark is a fascinating study in contradictions. That may be why she is such a captivating artist. She clearly knows her way around Ysaÿe, Paganini, and Kreisler, yet demonstrates absolute reverence for the music of her Kentucky roots. She’s completely at home standing in front of a symphony orchestra, yet don’t be surprised to find her in a jazz club or a jam session with the likes of bassists Edgar Myer or Michael Thurber. And lest you think there’s an ounce of diva in this Kentucky-bred violinist, you might have been just as flustered as many lucky folks here in Knoxville, Tennessee who just happened to find Tessa playing Bluegrass outside a makeshift vaccine center last week for those in line.

I was among the socially-distanced crowd at the magnificent Tennessee Theatre who had an opportunity to hear Tessa perform "Sky," the Pulitzer Finalist violin concerto Michael Torke composed specially for her, under the direction of Maestro Aram Demirjian. (It helps to score coveted tickets when one of your closest friends is Knoxville Symphony Orchestra’s Executive Director and the flutist in your flute quartet.) After a light supper of fried bologna for me, pimento cheese BLT for my friend (when in Rome…), we settled into our theater seats for some true southern comfort. 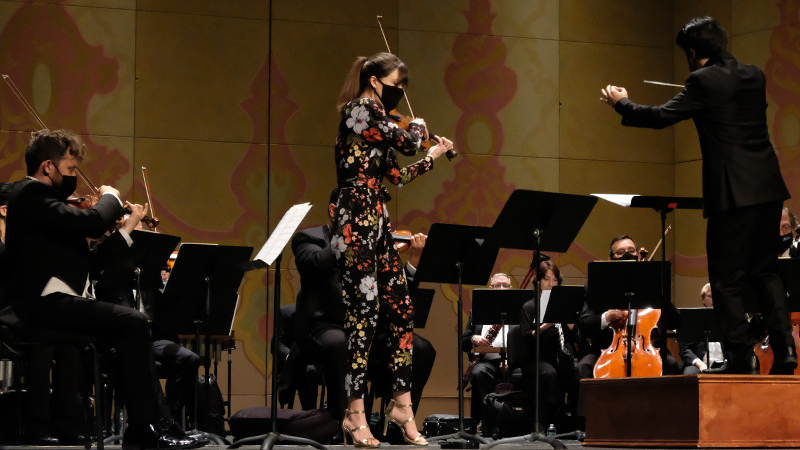 I will leave formal reviews to the real critics. I’ll simply note that I was as entertained, moved, and uplifted by this Bluegrass concerto as I am on hearing any one of the traditional concertos I grew up studying. As for Tessa, it’s no wonder her recording of the piece garnered a Grammy nomination for her performance. The music, and her interpretation, remind me of the limitless nature of the violin itself and the many groups of people who have cultivated a unique violin style they call their own, be that classical, Celtic, Bluegrass, or any other.

"Sky" has three movements, titled Lively, Wistful, and Spirited. The work was collaboratively commissioned by 11 separate orchestras — a move I think is quite smart in that it ensures a respectable amount of performances upfront. In the composer’s own words, the first movement involves "banjo-picking technique" for the solo violin. For the second movement, my personal favorite, Torke’s source material "was Irish reels, the forerunner of American Bluegrass." And the third movement, "fiddle licks with a triplet feel." Torke wrote his own themes within the style, and "developed the ideas into a standard, ‘composed’ violin concerto." He said that "everything is written out, nothing improvised."

Although I was extremely taken by the entire piece, Wistful is an absolute gem. I could envision it being extracted from the broader work and performed separately, in the manner the second movement (Sorrow) of William Grant Still’s Symphony No. 1, "Afro-American," has taken on a life of its own, separate and apart from the broader work from which it was born.

Wistful evokes the simplistic grandeur of an Appalachian sky. One can almost see a young girl (a very young Tessa, perhaps) looking upward and wondering what lies beyond her treasured homeland. Torke seems to pull longing from the plaintive open intervals of the Bluegrass style. This is not a piece that simply weaves in Bluegrass themes. Rather, the themes seem to be birthed from the struggle, passion, and seeming isolation of the people who claim them.

True to her seemingly endless contradictions, in her sky-high gold heels and flowered jumpsuit, Tessa looked every bit the concert violinist and down-home girl all at once. I’m not sure if Torke has a marking in "Sky" noted as "ponytail flying," but if not, he should. Further, if a contemporary ballet company doesn’t snap up "Sky" and give it to a choreographer, that would be a missed opportunity. And the choreographer would be wise to put Ms. Lark front and center, as her physicality and energy tremendously enhanced the live performance (as evidenced in the rehearsal clip below).

Stylistic appropriation is a veritable minefield, so I will tread lightly. My hope is simply that this beautiful concerto does not languish because there is a sense it can only be performed by violinists from Appalachia. Tessa has given us a roadmap for the style. We have her recording as a concise and seemingly perfect reference point. Torke has written every note; no improvising required. How wonderful it would be if violinists who do not hail from Kentucky or other parts of Appalachia feel comfortable digging into this joyous music in the same manner they would study the Baroque, Classical, and Romantic styles.

It is only fitting that the concerto was written in collaboration with Tessa and that she will forever be tied to the piece and its musical birth. But I can think of no greater tribute to both Tessa and Torke if the concerto were to open up the Bluegrass world to violinists and concert-goers alike.

***
Author’s note: Covid restrictions at the time of this concert imposed a 90-minute time limit on performances. "Sky" was beautifully paired with Beethoven’s 2nd Symphony and the concert was performed without intermission.

May 27, 2021 at 02:08 AM · Brava Tessa! What an astounding rehearsal clip. I would love to hear the entire thing! And thank you, Diana, as always for your descriptive, witty writing.

May 27, 2021 at 02:36 AM · I don't think you have to leave the formal review to real critics for two reasons. First of all, you are a real critic and second, that was a magical, magnificent review. Your article and the rehearsal clip once again left me so upset that I wasn't in Knoxville to hear the concert live. A tease again. Alas. I look forward to the second best and that is to hope that she gets a chance to record this in the near future and that I will have the honor to hear it.

Joe, I wish you had been sitting next to me. I should have mentioned that Tessa has recorded the work with the Albany Symphony. Here is the link to purchase:

Sky, with Tessa Lark and the Albany Symphony

Here is the YouTube link, which will take you through each of the three movements:

Her performance with the Knoxville Symphony Orchestra is also still available "on demand" at a price. Here's the link.

May 27, 2021 at 09:39 AM · Thank you so much, Diana! Tessa Lark and the Torke concerto are fascinating, but you have also introduced me to William Grant Still, and I am greedily trying his gorgeous music right now as I write.

May 27, 2021 at 12:02 PM · Richard, Thank you for the lovely comment! As for William Grant Still, if you haven't tripped over it yet, here is a beautiful performance of Sorrow by the LA Phil:

Sorrow, performed by the LA Philharmonic

May 31, 2021 at 12:58 AM · Paul, I think it's a great suggestion. Tessa has been here in Knoxville twice now, and rumor has it she'll be back next year. She is one of those artists that quickly builds a following, which has been great for ticket sales and donor enthusiasm!

June 2, 2021 at 12:24 AM · You're right, Diana. The second movement is stunningly beautiful. There are some parts that remind me a bit of the Barber concerto, but in any case it is squarely in a style that is instantly recognizable as "Americana", and it is style that we should be justly proud of.

June 2, 2021 at 12:52 PM · David, I greatly appreciate your comment because it gave me the word I've been searching for... "Americana." I resisted the urge to compare certain sections of the concerto to, for example, Copland (as I've seen written more than once) because I feel that type of comparison somehow misses the point. These composers are drawing from, or creating from scratch in Torke's case, themes that stem from our own rich heritage. And, I agree, it's a style of which we should be justly proud.