May 11, 2022, 1:12 PM · Pianist Jeremy Denk has given us possibly one of the greatest love stories of all time. In his book, Every Good Boy Does Fine: A Love Story, in Music Lessons, we get to experience his musical coming-of-age – those awkward, sometimes painful, often exhilarating years between being a six-year-old who is prescribed piano lessons to fill "a need to be occupied" and his starting out on what we all know will be a world-class career. 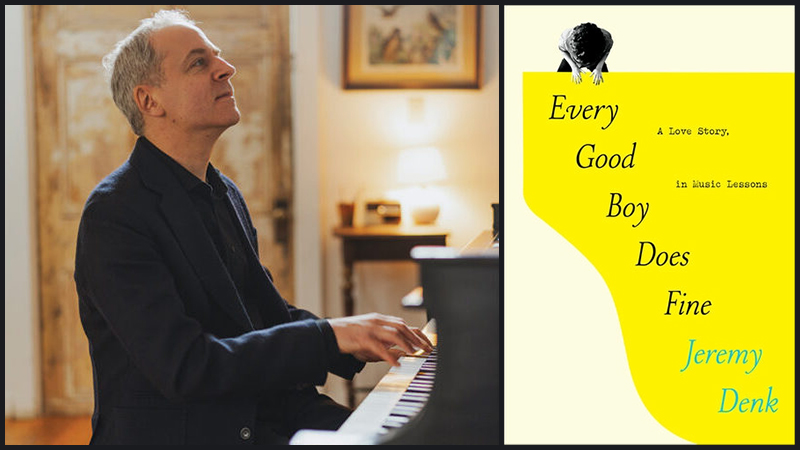 If one didn’t know how Denk’s career turned out, his touching memoir might lead us to a far different conclusion. He describes a path that is untraditional and often random. Denk’s writing focuses more on his failures and missteps than his triumphs. And that alone makes his story all the more interesting.

He revisits his musical journey through every one of his piano teachers and the corresponding repertoire they assigned. He learns a great deal from each, in some cases, lessons he will later have to undo. But there are gems delivered by all and mature Jeremy acknowledges those, often in retrospect.

Denk describes one piano teacher as "alternating between spirit guide and physics teacher, trying to bridge the gap between boring technical detail and the mysteries of the universe." He talks of another who after a difficult passage said "with disbelief and delight" that Denk had nailed it. Denk poignantly writes about the much older man, "He put his trembling hand on my shoulder, then tousled my hair like a son. What a complicated joy that must have been: provoking me into doing something he could never do again."

In short, we get to experience Denk falling in love with music. His analysis of scores and his ability to articulate those tiny intricacies that represent the difference between notes on a page and earth-shattering emotion are both intellectually and emotionally stimulating. At age 12, he is stupefied when hearing a cassette of Mozart’s Sinfonia Concertante and listening to the trills ("Had Mozart lost his mind?"). He still cherishes that passage. His loves were shaped in part by their opposites. He describes the Clementi Sonatinas as "music so transcendentally mediocre that it is thought a child cannot ruin it." And Ernst von Dohnányi’s Essential Finger Exercises as "a new horizon of boring." But he soon discovers Brahms and a piece that remains his favorite to this day. In a heart-breaking twist, the piece is one he’s only performed once due to an initial performance that left him seemingly confused and conflicted. Denk also discovers Charles Ives, a "new compositional hero" who he compares to many music teachers in that Ives "did everything possible to piss you off and mess with your head, then begged you (despite it all) for belief."

Much of what Denk learns across the years comes from playing chamber music and accompanying in string and voice studios. There is a wonderful sequence in which violinist Eugene Purdue opens Denk’s eyes to phrasing in Brahms. An interesting time as Denk navigates the violin studios of Robert Mann and Dorothy DeLay. A moment when famed cellist Janos Starker "stared at me from the other side of a career" and says to Denk, "You are better than that." According to Denk, the comment is "a classic double-edged Starker-ism: on the one hand, the great master has opinions about me; on the other, I was a disappointment."

One of the most humorous sections involves Denk’s short-lived career as a violist ("an instrument my parents made me promise never to really practice"), playing in his junior high orchestra. The conductor chose music that was beyond the abilities of the young players. Of Mendelssohn’s String Sinfonias, Denk writes: "We knew this music was good; we experienced its goodness in real time as we massacred it. The joy was inseparable from the massacre.” Of Bach's Brandenburg No. 3: "I knew in a flash the joy of inner voices (an important lesson I was learning 'by accident'), of passing an idea to the alto voice and hoping the second violins would take up our momentum, and glowering at them when they came in late. I remember the back stands of the seconds often staring back at me, droopy, bovine, partly from tater tot torpor but mainly confused about how enthusiastic I was, which, come to think of it, is the same way second violins often look at me now."

Denk’s parents feature prominently in the book; his father ("a connoisseur of regret"), his mother, someone who delivers a postmortem to Jeremy in front of his classmates after a school recital ("You rushed, bub"). Denk seems to understand, even as a child, the vacillation between his parents’ pride and disdain. ("My parents needed to constantly reassure themselves of my talent, to make them less terrified that I was becoming a musician.")

When Denk heads off to Oberlin at age 16 to pursue a double major in chemistry and music, he fights an internal struggle about the expectations placed on him by others. Academic teachers were optimistic about his future as a scientist. His math teacher thought he was a born mathematician, while his English teacher had high hopes for a writing career. Denk ends wryly with, "My gym teachers, however, never wanted to see me again."

In this beautiful passage about two of his teachers, William Leland and György Sebok, Denk sums up one of the great dualities that all performers must endure. He writes, "Leland had been right to remind me that there was no end to the details one could strive for, but Sebok was also right – the desire for perfection could be a deadly weakness. Living comfortably in that paradox, without even knowing it, is part of being a musician. There’s a labyrinth of voices inside your head, a counterpoint of self-awareness and the remembered sayings of your guides and mentors, who don’t always agree. Sometimes you wish you could go back to ask your teachers again to guide you; but up there onstage, exactly where they always wanted you to be, you must simply find your way. They have given all the help they can; the only person who can solve the labyrinth of yourself is you."

Lucky for all of us, Denk masterfully found his way.

May 12, 2022 at 01:59 AM · How timely; I just read this book! I absolutely loved it. As a bonus, I was double degree (violin and math) at Oberlin not too many years before Jeremy Denk was there, and like him, I went on to do a master’s at Indiana, so I knew many of the professors that he wrote about.

May 12, 2022 at 02:20 AM · Mary Ellen, It's very interesting how your academic history parallels Denk's. In the book he makes such a point of choosing Oberlin (over Harvard and Yale, as I recall) based on the formal double degree program that existed. I assume it factored into your decision as well. Happy to hear from another violinist who loved the book. Thank you for your comment!

May 12, 2022 at 02:31 AM · My decision to go to Oberlin was 100% based on their double degree program. The math degree was intended as a safety net but its primary purpose was to keep my parents happy. The only time I really used it was at Indiana – the math department there didn’t have enough grad students to staff their intro/gen ed classes so I had an assistantship that helped pay for my graduate violin performance degree.

May 12, 2022 at 02:57 AM · I also read the book, and being very close to the same age as Jeremy, it certainly brought me back to a certain time, place and head space. I'm pretty sure I attended a few of the same concerts at Indiana University, including an unforgettable performance of the Franck Sonata by cellist Janos Starker and Jeremy's teacher, György Sebok, which Jeremy describes vividly.

My favorite quote, though, was this one from a description of his earlier life: He had just won a very early competition, and he mused that the judges kept talking about how musical he was. He found it puzzling. But he acknowledged, he liked to experiment "like a mad scientist" with phrasing:

"I'd place a certain note, play it a little louder or softer or gentler or with more surprise, and then the music would mold time or escape from time, and I knew I'd found it. Was that musicianship? It was strange to think of that private act as my best chance at success in life."

May 12, 2022 at 03:11 AM · Mary Ellen, As the gal who single-handedly disproved the connection between math and music, I admire you more than I can say.

Oh, Laurie, what a wonderful quote! I think what I found so disarming about the book was that Denk always seemed semi-surprised by the good things that he created, oftentimes by happenstance. He definitely threw a lot of darts at the board. I guess what ultimately distinguished him was that he did know when he hit the target, or in his words, "found it."

May 12, 2022 at 03:42 PM · Thank you Diana, this is a very nice review. Yes Laurie put a nice quote up there about experimenting with phrasing. As a viola da gamba learner I've lately finally been practiced enough on a few pieces that I can experiment with phrasing and dynamics, and not just in a measure but thinking about the piece as a whole. I'm still terrible but that kind of experimentation really opens up the music to an intimate exploration one can't achieve merely as a listener.

May 12, 2022 at 04:36 PM · Will, thank you for the lovely comment! Through Denk's words, the book really showed me the value of experimentation. In one passage, he writes about going into a practice room and playing a C-sharp over and over again, trying to "explore hypotheticals." He did this after he was stunned when his teacher demonstrated a passage of recurring C-sharps. He writes: "His repeated C-sharp wasn't repetitive. It was an object for thought, both same and different. You wanted to hear what happened to it. How was that possible?" Best of luck to you with the viola da gamba! Such a beautiful instrument!