August 14, 2018, 10:35 AM · Congratulations to the 12 semi-finalists announced today in the Shanghai Isaac Stern International Violin Competition! They are: 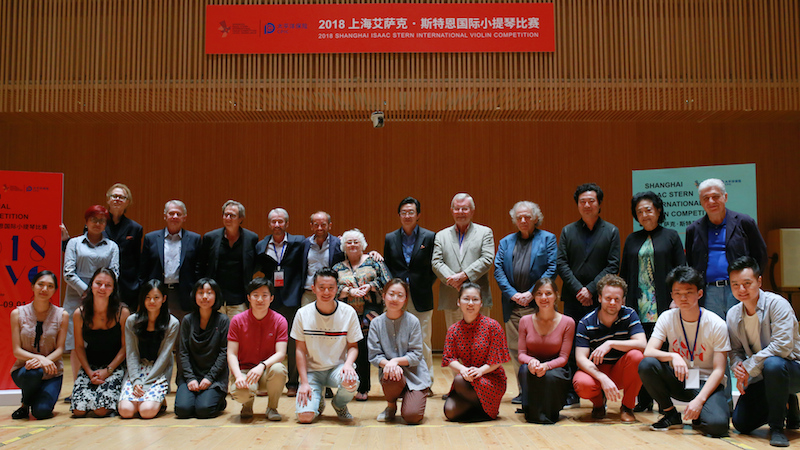 Semi-finalists in the Shanghai competition, with jury members standing behind them.

The semi-final rounds will begin on Saturday and you can find the livestream on the Violinist.com Facebook page (click here). There will be two groups of semi-finals: during Aug. 18-20 rounds, participants will perform a Haydn quartet movement with the Shanghai Quartet, a sonata and a Fritz Kreisler piece. During rounds Aug. 23-24, each must each perform Mozart Concerto No. 5, with their own cadenzas. The final rounds, Aug. 30 through Sept. 1, require the performance of a work written by Chinese composer Qigang Chen, "La joie de la souffrance," as well as a major violin concerto (Tchaikovsky, Brahms, Mendelssohn, Beethoven, Glazunov, Prokofiev 1, Dvorak or Bernstein Serenade). Winners will be announced Sept. 1.

The competition includes a grand prize of $100,000. Second prize will be $50,000 and third prize $25,000, with a prize of $10,000 awarded for the best performance of the Chinese work, Qigang Chen’s "La joie de la souffrance." A $10,000 Isaac Stern Prize also will be awarded to an individual – in any field and from any part of the world – who is deemed to have made an outstanding contribution to the understanding of humanity through music.

Winners in the 2016 Shanghai competition included first-prize winner Mayu Kishima of Japan, with Sergei Dogadin of Russia coming in second and Serena Huang of the United States third.