August 19, 2018, 7:42 PM · The 12 violinists who remain in the Shanghai Isaac Stern Violin Competition are mid-way through a rather long semi-final round that focuses not so much on virtuosity but more on their ensemble skills, flair for style in Kreisler, and then later this week, their ability to lead a Mozart concerto and write the cadenzas for it.

Find the video feed for the live as well as past sessions on Violinist.com's Facebook page (click here).

For Sunday's session, which took place in Shanghai Symphony Chamber Music Hall, the contestants had to choose between two sonatas for violin and piano: either Beethoven's Sonata No. 3 in E major, Op. 12 or Brahms' Sonata No. 2 in A major, Op. 100. They also were required to play a piece by Fritz Kreisler, with 10 specific pieces from which to choose. 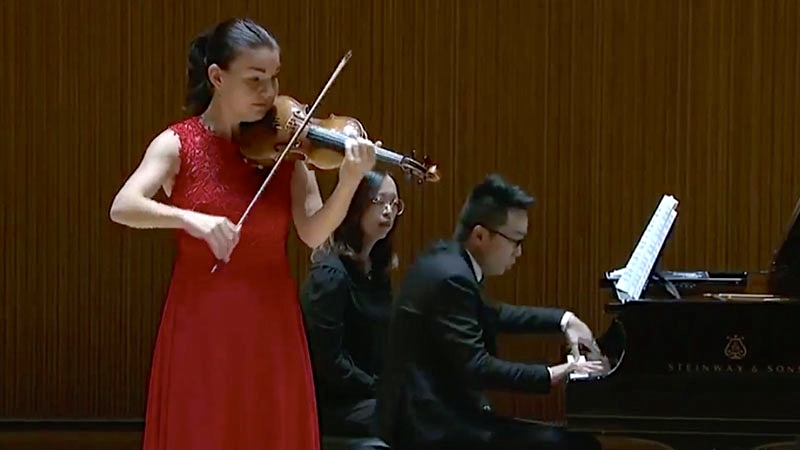 Olga Šroubková of the Czech Republic, who played sixth on Sunday, with pianist Zhen Chen.

Below are some impressions from Sunday's sessions; please feel free to add your thoughts and comments if you have been following the videos online.

Having already shown herself an excellent chamber musician in yesterday's session with the Shanghai String Quartet, Diana Tishchenko of Ukraine seemed well-suited for Beethoven Sonata No. 3 in E major Op. 12, which is as much a piano sonata as a violin sonata. (Click here to see her performance.) Tishchenko, a graduate of the Hochschule für Musik "Hanns Eisler" Berlin, showed her skills as a collaborator once again, going to lengths to keep tricky-fast sextuplet figures together with the piano in the first movement, among other details. Pianist Zhen Chen did a standout job executing the extreme demands of this sonata, in this performance especially (he came back and played it again in the afternoon session). More importantly, it felt like a collaboration. A moment that stood out was their coordination the beginning of the second movement, with Tishchenko creating a flowing line that contrasted beautifully with the soft punctuation of an accompaniment part in the piano. The last movement was humorous and playful, and Tishchenko was clearly aware and physically clear about when the pianist had the right of way. For the Kreisler piece Tishchenko played "Caprice Viennois, Op. 2," with nice loose vibrato highlighting the schmaltzy double stops.

Alex Zhou of the United States, who studies with Zhao Wei at the Pre-College Division of the San Francisco Conservatory of Music, chose to play the other sonata on the competition list, Brahms Sonata No 2 in A major, Op. 100. (Click here to see his performance.) This is not a piece that plays itself, and of Brahms' three sonatas, this one is arguably the least straightforward for the violinist. The violin begins not with a melody but with a fragment from a melody introduced by the piano, then with strange outburst -- frankly it's a while before the violin gets to say a complete sentence. Zhou made this all flow quite nicely, with a graceful sense of dynamics and sense of fitting those levels with the piano part, played in this case by Jonie Huang. In the second movement he made quite a lot of colors come out of his violin, which may have required some coaxing. In contrast to the fragmented first movement, the third movement of this sonata begins with a nice, juicy melody that goes high up on the G-string; so high in fact that the highest note of this little melody does not always sound great on the G string, depending on the violin you're playing. I frankly don't know if it's an editor or the composer that marked it all "sul G" - every note on the G string. (I had an awful violin in college, and my teacher made me play the note up on the G. It sounded exceptionally awful, but I digress.) Zhou did not play that note on the G string (nor did Olga Šroubková, in the afternoon). I saw a few jury pens picked up at this point, but frankly I smiled. A violinist must make the music sound good on the equipment that he or she has, whatever he or she must do. If the sound breaks on the G, play it on the D, for heaven's sake. I thought Zhou made it work. He ended with "La Gitana," with fast and clear trills.

The competition had two performers play for each session, and the afternoon session that followed was coincidentally an exact replica of the morning session, the first person playing what the first person played, and the second person playing what the second played. I thought: this is a bit unfair, it really invites comparisons. Then I remembered, this is a competition, there's $100,000 at stake; it's all about comparisons!

I'd still argue that, for the audience, a competition also can be about watching some very accomplished young musicians play this music in their own ways, and taking away whatever ideas, emotions and memorable moments that emerge from their performances.

So unintentionally mirroring the repertoire of Tishchenko, the Russia-born Arsenis Selalmazidas of Greece played the Beethoven sonata, as well as Kreisler's "Caprice Viennois." (Click here to see his performance.) He also played with pianist Zhen Chen. Selalmazidas, who studied with Zakhar Bron at the Hochschule für Musik und Tanz Köln, chose to play without the music, using a bit more rubato in many places. Occasionally there was some disagreement between violin and piano about tempo. Selalmazidas played with a solid presence and commitment to his interpretation; if the phrasing was a bit quirky it was certainly by design. The third movement seemed a bit fast, considering how busy the pianist is. Chen handled it with grace but it seemed almost to fast to hear everything properly. Selalmazidas seemed to take pains to make "Caprice Viennois" sound Viennese-- I think I even heard a bit of the signature Viennese-waltz-beat-displacement in there.

Playing the Brahms Sonata and Kreisler's "La Gitana," Chang Yuan Ting of Canada performed with pianist Jonie Huang (Click here to see her performance.) Ting was born in Taiwan and studies with Dora Schwarzberg and Lucia Hall at the University of Music and Performing Arts Vienna. In the first movement Ting made liberal use of small glissandi and really painted on a lot of phrase work, even in accompanying figures. During the second movement she created many beautiful gestures, though I longed for more of a through-line in phrases. It might have been interrupted by a habit of subtle portato in the bow, which did disappear for climaxes and other important areas in the music. Ting really hit her stride in "La Gitana," which was well-suited for her. It's a very mercurial piece, changing moods and colors constantly, and she made sense of all those changes, creating nicely distinct sections for the listener.

Expectations have been high for Nancy Zhou of the United States, who played the Beethoven sonata and Kreisler's "Recitativo and Scherzo-Caprice, Op. 6." (Click here to see her performance.) Zhou, a graduate of Harvard University who studied with Miriam Fried at the New England Conservatory, played the Beethoven with Janie Huang (who had not played this piece yet today); and the Kreisler piece was a solo work. Playing with clear articulation in both hands, Zhou's tempos were frankly a bit merciless for the pianist, requiring her to play tricky sextuplet passages at demon speed, then slowing down for the calmer sections of the music. Zhou shaped the melodic lines quite beautifully in the second movement. The third movement was fast and got faster. The strongest part of Nancy Zhou's performance was her "Recitative and Scherzo-Caprice," and it was very strong indeed. This was a bold and showy choice, a piece without any piano that is full of tricks: double stops, harmonics, trills, left-hand pizzicato, ricochet -- and she did it all so well. I'd recommend watching it and showing it to students as well (see the link above).

By the end of the day, I'll admit to being a tired, grumpy audience member who badly needed a nice cold bottle of water (man is it humid here in Shanghai!) I was in no mood to hear Brahms again. Nonetheless, by the end of Olga Šroubková's performance of the Brahms, I was completely won over, exhaustion forgotten. (Click here to see her performance.) Šroubková studies with Adam Kostecki at the Hochschule für Musik und Drama in Hannover. It was in the second movement that she really grabbed my attention, starting it as a simple statement, and then literally stepping aside when the piano had the line - played by Zhen Chen. The more upbeat sections of this movement had a dance-like quality, thanks to her chosen tempos and articulations. The long climax near the end of the movement did not feel as drawn-out as it sometimes does - it was simple, straightforward and utterly beautiful. In moments during the third movement she achieved that elusive quality of making a century+-old piece that many of us know like the back of our hands feel like it's being improvised on the spot - fresh again, without doing anything strange or novel to it. She played Kreisler's "Marche Miniature Viennoise" - not the most technical piece on the list, but Šroubková played it with convincing style, with a sense of dance and delight.

More to come! Again, to watch these performances, find the videos and live feed on Violinist.com's Facebook page (click here).