August 28, 2018, 4:59 AM · SHANGHAI -- On Tuesday the Shanghai Isaac Stern International Violin Competition announced the recipients of the 2018 Isaac Stern Human Spirit Award: Iranian kamancheh player and composer Kayhan Kalhor and the Xiaoshuijing Miao Farmers Choir from Yunnan Province, Southern China, whose members all are part of the Miao minority group. 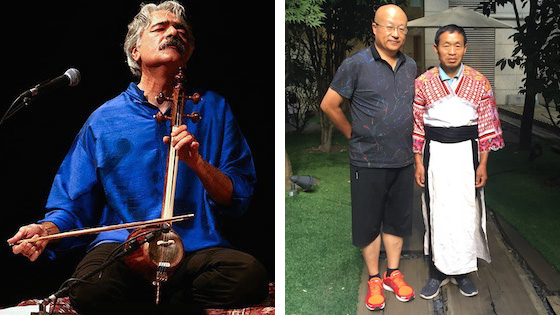 Established in conjunction with the first Shanghai Isaac Stern competition in 2016, the $10,000 USD award (to be split by the two recipients) was created to recognize an individual or group - in any field and from any part of the world - who is deemed to have made an outstanding contribution to our understanding of humanity through the medium of music. Recipients are chosen by president of the competition’s organization committee Long Yu, cellist Yo-Yo Ma by special invitation, and members of the Stern family.

Kalhor primarily plays the kamancheh and is known for using elements of Kurdish traditional music in his Iranian classical music compositions. He is a member of the Silk Road Ensemble currently lives in the U.S. "I consider myself a cultural ambassador for my country," Kalhor said over the phone Tuesday at the official announcement in Shanghai. "I will continue my mission to present Persian music to the world."

The Xiaoshuijing Miao Farmers Choir, led by Guangyuan Long, was established in 2002 as an extension of the village's Christian church choir, formed in 1986. With 63 members, the choir comprises fully 14 percent of the town of Xiaoshuijing's entire population of 447 people (138 families). About 80 percent of the village is Christian, and the remote mountain town is located 20 miles northwest of the city of Kunming.

Guangyuan Long and choir president Zhang Xiaoming traveled to Shanghai to be present at the announcement of the award on Tuesday. Speaking in Chinese and wearing traditional Miao costume, Long explained that most of the villagers have little education and that none of them, including him, have any training as musicians. Their musical skills were passed down as an oral tradition. Long was appointed by the village to direct the choir because he showed talent. There are no auditions; anyone who is interested can join the choir. The group has 400 songs in its repertoire, including traditional Chinese, western and the Christian music that they have learned in church.

The awards will be officially presented on Saturday after the closing concert of the Shanghai competition. Winners of the 2016 Isaac Stern Prize in 2016 were Taixiang Wu and Zhengquan Du, founders of The Einstein Orchestra, a middle-school orchestra in China; and conductor Negin Khpalwak of Afghanistan.

BELOW: Kayhan Kalhor performs for an NPR Music Tiny Desk Concert in 2012.

BELOW: The Xiaoshuijing Miao Farmers' Choir performs a version of "Worthy Is the Lamb that Was Slain" in April 2018.

August 28, 2018 at 04:41 PM · The kamancheh is not "also known as the Iranian 'violin'". If anything, the violin ought to be known as the European kamancheh, since the kamancheh predates it by centuries, and bowed lutes of this type are what influenced medieval European instrument makers to experiment with the bow. Since perhaps you are not familiar with Kalhor's exquisite mastery, I would encourage you to spend some time with his music. His right hand is sublime, IMO. https://www.youtube.com/watch?v=jMEjPKBvhzE

August 28, 2018 at 10:51 PM · Thanks you Paul, it would appear that some do call it that, but it is good to be reminded that the evolution was actually the other way around! That is a great video, I'm going to add it in.