August 31, 2018, 12:11 AM · SHANGHAI -- Of all the instruments, the violin has perhaps the widest capacity to express human emotion, said France-based Chinese composer Qigang Chen.

"The violin's expressive capabilities have developed over centuries, with the accumulation of many very delicate techniques," Chen said, speaking with a group of reporters at his hotel in Shanghai about his new violin concerto, "La Joie de la souffrance" ("The Joy of Suffering."). 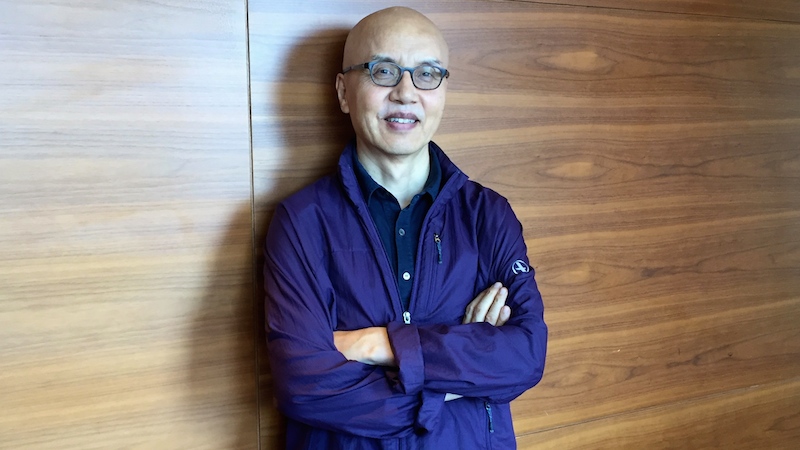 That broad capacity for expression, more than his own personal suffering, was the inspiration for the concerto -- though to read his biography, Chen certainly has seen his share of suffering. Born in 1951 in Shanghai, Chen grew up in an intellectual family that nurtured his interest in music. Unfortunately this made him a target during his teens, when he was locked up in a barracks and given an "ideological reeducation" during China's "Cultural Revolution." He emerged from this period unchanged in his love for music and in 1977 began studying composition at the Beijing Central Conservatory with Luo Zhongrong. In the early '80s he was authorized to study abroad after passing a strict exampe, and he became the legendary French composer Olivier Messiaen's last student, studying with him from 1984 to 1988.

Chen's new violin concerto -- his first work specifically for the violin -- was commissioned in part by the Shanghai Isaac Stern International Violin Competition. Each of the competition's six finalists, are required to perform the work with the Shanghai Symphony Orchestra, conducted by Michael Stern. (The first performances were on Thursday, with another set on Friday and then Saturday.) The piece was actually premiered in October 2017 by violinist Maxim Vengerov, playing with the China Philharmonic and conductor Long Yu at the 20th Beijing Music Festival. Other co-commissioners were the Melbourne Symphony, New Jersey Symphony and Orchestre national du Capitole de Toulouse.

This work is not a traditional, three-movement concerto. Meant to be about 25 minutes long, Chen described it as "waves of emotion."

"It takes time for emotion to build," he said, and the first 20 minutes are meant to build to a climax, which phases out in the last five minutes. (The duration of the piece has so far been variable, according to the violinist).

Is it a "modern"-sounding piece? Chen said, in a word, "No." He also said that whether a piece is "modern" or not is not the best way to judge a piece. His mentor, Messaien, said that the best way to measure a piece was by its honesty and authenticity, telling his students that foremost, they must be themselves and be honest in their work.

Chen, who is not a violinist (he studied clarinet) said that he did not consult a violinist in the first phase of composing the piece. Instead, he composed it for its emotional and musical content, spending about seven months composing it. Before the world premiere, he worked with violinist Maxim Vengerov for a full week before the first rehearsal, in order to work out fingerings, specific bowing techniques and other issues that would be involved in performing the piece. After the competition, Vengerov will record the piece with the Shanghai Symphony Orchestra and conductor Long Yu.

When asked if writing music was a healing process, Chen said that "Art is an artist's language; it's how we express our condition. It's more like an outlet, where we can let out our emotions. Whether it heals or solves any problems, that depends on how successful the piece turns out to be."

August 31, 2018 at 10:50 PM · Wow Laurie, for such a short article, this stimulates so many dimensions of reflection and curiosity! At one level, I care nothing for the life and circumstances of an artist, preferring to judge works purely on aesthetic impact, as if asking "does it move my heart and mind in my very different time, place and subjectivity?" Such criteria seems to be my search for something more humanly universal, something transcendent of (though of course still emanating from) the immediate world of the artist's life. Yet at the same time, and surprising to me, this interview intrigues me to hear the piece knowing, after all, just a little of the artist's life. I want to hear how a Chinese composer has taken an ancient Chinese melody (and of course the more abstract but larger and no doubt powerful formation of aesthetic sensibility growing up in Chinese music and culture), reflected on that ancient tradition while being persecuted under a revolutionary regime intent on breaking ties with much of the Chinese past, and then reworked it after the influence of great European composer-teacher and the larger Chinese integration into the western orchestra as his ensemble. Also I would be very interested in the multiple-CD set of all or several of the 6 violinists (I hate in art that word "competitors") renditions of this work, as a further study of the human interpretation in every step of making the music, from influences to composing to playing.

September 1, 2018 at 12:56 AM · Here is a good performance of it from the competition, at the beginning of the video, with Jiayi Chen of China:

September 3, 2018 at 08:21 PM · Avery fine piece indeed! Shows not all contemporary composition is obtuse. This piece has some real delicacy and beauty. At moments I almost hear a touch of the wistful side of Vaughan Williams. And so enjoyable to watch how precisely played by the soloist, backed perfectly by the orchestra!