October 18, 2019, 2:38 PM · Welcome to "For the Record," Violinist.com's weekly roundup of new releases of recordings by violinists, violists, cellists and other classical musicians. We hope it helps you keep track of your favorite artists, as well as find some new ones to add to your listening! 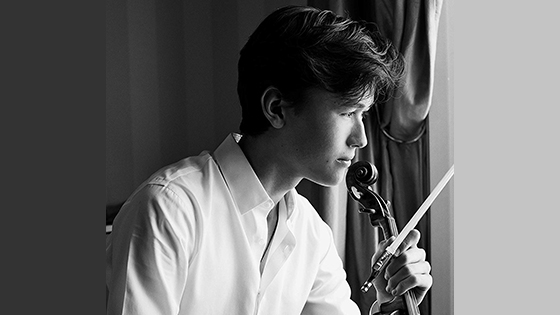 Swedish violinist Daniel Lozakovich, 18, explores works by Tchaikovsky, including the Violin Concerto, Méditation from Souvenir d'un lieu cher; and arrangements of two vocal works, Lensky’s Aria from Eugene Onegin and Romance, Op.6 No.6, "None But the Lonely Heart." Lozakovich performs the Concerto with the Russian National Philharmonic Orchestra, with conductor and fellow violinist, Vladimir Spivakov, with whom Lozakovich made his solo debut in 2010. “Playing with Maestro Spivakov and the Russian National Philharmonic, I really felt the Russian soul of their sound," Lozakovich said. "My favorite interpretation of the Tchaikovsky Violin Concerto has always been Maestro Spivakov’s recording. After the sessions he said to me, ‘I have played this concerto with my personal interpretation for the last 50 years. Now it’s your turn to do the same with this concerto for the next 50 years.’ That meant so much to me. BELOW: From the album, Lozakovich performs "Valse sentimentale. Tempo di Valse" from Tchaikovsky's Six Pieces, Op. 51.

This double-CD celebrates the 250th anniversary of Beethoven’s birth, with works taken from each of the composer’s three creative periods. In addition to the Violin Concerto and the early Septet, Op. 20, are the "Variations on Folk Songs," Op. 105 and 107. "The emotions in Beethoven’s music are extremely rich and personal," said Kavakos. "They reveal a big heart that is filled with the courage to challenge the world. We encounter a man capable of being not only polite but also very coarse. His world is typified by inner conflicts and powerful confrontations. In my own view it is impossible to approach Beethoven by means of stylized emotions – ‘pure’, controlled and, as it were, disembodied intonation is not enough. Beethoven leaves the eighteenth-century perspective far behind him and looks resolutely ahead." Kavakos’s cadenzas are based on the ones that Beethoven himself is believed to have written down in 1809 in his own copy of the piano version of the concerto that he prepared in 1807. BELOW: An earlier recording of Kavakos playing the Beethoven third-movement cadenza in a performance with the Petersburg Philharmonic Orchestra conducted by Yuri Temirkanov

Not knowing Who wrote the 'Promo' for Leonidas Kavakos' new recording of Beethoven's Violin Concerto 3rd Movement Cadenza, naming Violinist, Leonidas Kavakos, Composer or a copy of Beethoven's 1809 Piano Score of 3rd Mov't Cadenza?, X or Y needs to learn about the late, great Fritz Kreisler, who composed All 'beloved' Beethoven Violin Concerto Cadenza's which have been performed by the greatest soloist musicians of the Violin, for near 100 plus years! And, btw, by the likes of Nathan Milstein, Toscha Seidel, David Oistrakh and Jascha Heifetz, plus other renowned concertising violin soloists most proudly & happily!

Leonidas Kavakos performs *Fritz Kreisler's Cadenza for the 3rd Movement of Ludwig van Beethoven's Concerto for the Violin above with Russian conductor, Yuri Temirkanov, also pictured looking on. Having recorded this Pearl of Great Violin Concerti, & in concert with the Paderewski Philharmonie in Poznan, Tarem & Bydgozg, Poland, followed later in these United States with a Beethoven Scholar, I feel an obligation to inform any screening your Music 'Reviews' for authenticity, of an error or a more serious mistake in granting credit to a very fine musician, Leonidas Kavakos, as Composer of 'his' Violin 3rd Mov't Cadenza of Beethoven's Violin Concerto, based on and impressioned by Beethoven's Piano Score of 1807, w/said writer of such, possibly unaware of Fritz Kreisler's original and renowned Cadenza's to not only Concerti of Beethoven, but of the Brahms and a Mozart Violin Concerto + a few other Violin masterworks, which albeit unknowingly was/is truly offensive to Fritz Kreisler, revered Twentieth Century Violinist-Composer of dozens of Violin pieces, Cadenza's & lesser known works, all of which were unanimously endorsed & lovingly embraced whilst being performed throughout the globally international violin concert world by both my violin mentor's, Jascha Heifetz & Nathan Milstein, for starter's & continues thusly today. If said article posted above is mis-leading & the 'Double CD' includes Mr. Kavakos' new 3rd movement Cadenza to Beethoven's Viiolin Concerto, Now, I must mention that Not once in the many years of my involved studies & conversations with both Icon's of Violin Art, Heifetz & Nathan Milstein, did I hear either Master allude to nor mention anything remotely related to the new claim of Mr. Kavakos ~

(If this is the case, anticipate a range of various explanations, but do not show any ignorance by saying each & every famed Violinist has a 'right' to compose or 'improvise' any Cadenza to any Violin Concerto, for if so stated, it will be perceived as an even greater 'stain' on the wondrous 3rd Mov't Cadenza of its author, Grand Violinist-Composer, Fritz Kreisler's Art of original Cadenza's to all Three movement's of Ludwig van Beethoven's Violin Concerto . . . )

After overnight rest, I returned again to try confirming the well known Kreisler Cadenza IS, and on my third under-a-hearing-microscopic review-try, find IT IS that of Fritz Kreisler.

Can Violinist.com post Only the 'new' 3rd Movement Cadenza, Solo played by Leonidas Kavakos, who is also conducting the tutti scored sections of *Bavaria's Radio Symphony Orchestra, *named on the 'Double CD' promo just advertised above, for other discerning violinist.com members to hear? Hoping this described by Mr. Kavakos as Beethoven's own composed 3rd Mov't Cadenza, found in 1807, then in L.K.'s copy of the LvB 1809 Piano Score, impresses w/recently discovered originality, please be forewarned that if the just 10/18/19 Sony released Kavakos 'Double CD' of Beethoven's Violin Concerto w/LvB 3rd Mov't 1809 Cadenza , Opus 61 + other works on Sony's CD, (now available through Amazon.com) is still Fritz Kreisler's Cadenza (even 're-dressed' ?) 'Heads' of other international record companies may roll from sheer embarrassment at best.