October 29, 2019, 11:41 PM · Eastman School of Music Dean Jamal Rossi has said that the school will postpone a planned Eastman Philharmonia tour of China "until all members of the orchestra can participate."

Here is the message Rossi sent to the Eastman community Tuesday (read it below the story as well). 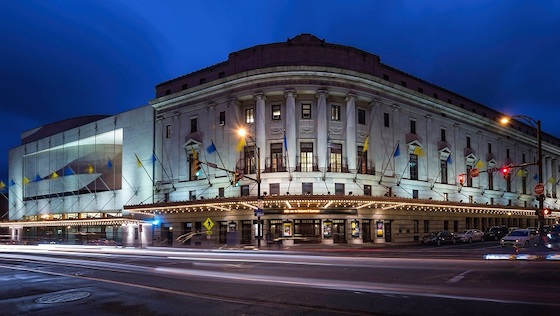 Earlier this week Rossi had announced plans to proceed with a planned China tour despite the fact that three South Korean students could not obtain required work visas and would not be able to participate.

"In late September, our tour partners in China informed us that they could not obtain visa applications for three South Korean students in the orchestra," wrote Rossi. "This was related to a 2016 decision by the US to deploy a missile defense system in South Korea, and China responded by blocking South Korean artists from performing in China."

He said that they had tried unsuccessfully to obtain visas for the students: "We have spent the past two weeks seeking assistance from our tour partners, our congressional delegation in Washington, D.C., as well as through the Chinese Consulate in NYC. Ultimately and unfortunately, these efforts have proved to be unsuccessful."

The idea of proceeding without the South Korean members of the orchestra produced much backlash; including post on Violinist.com by reader Joseph Galamba.

Here is the text from Rossi's latest e-mail announcing the 'postponement' of the tour:

Dear Members of the Eastman Community,

I write with an update on the planned Eastman Philharmonia tour of China. I initially chose to proceed with this tour to preserve a transformative opportunity for eighty students. But even after I announced my decision last week, my colleagues and I continued to actively explore multiple avenues to obtain appropriate visas for every member of the ensemble. Ultimately, however, we were not successful. Therefore, in consultation with many individuals, including University and Eastman leadership and our Chinese tour organizers, we have decided to postpone the tour until all members of the orchestra can participate.

I am grateful to the many individuals who took the time to share their thoughts about this matter. Regardless of individual positions, the overriding message for which we can all be grateful was a deep appreciation and respect for Eastman and a commitment to the standards and excellence that have marked our school for nearly 100 years.

For many years, Eastman musicians have performed in venues around the globe to a wide variety of audiences. It is my priority and personal commitment to continue to provide opportunities for Eastman students to share their music with the world. But I believe that given the particular circumstances of this tour, the best course of action for the Eastman community and the values we share is to wait until the Philharmonia can perform as one.

October 30, 2019 at 01:28 PM · The decision to play together or not at all is a necessary and powerful resolution to this political quagmire. I hope the Eastman can turn this into a learning tool for their students and creative community. When artists stand up for their rights and the rights of others their voices can be effective and persuasive. The irony is when an artist finds it necessary to choose silence in support of the rights of others, that silence can become an effective roar. As difficult and disappointing as this choice is, I'm certain it will infuse the students with the courage to recognize the necessity of integrity in the arts, and the occasional need to use that integrity through difficult actions that insist on respect, equality, and opportunities for everyone. This was a wise action.

October 30, 2019 at 06:40 PM · Bravi Eastman. In this age of partisanship and ethical "flexibility" it is gratifying to see an institution stand up to petty oppressive governments and political regimes.

October 30, 2019 at 07:57 PM · It would have been a lot more gratifying had Eastman done the right thing in the first place and not needed so much outside pressure to find a backbone.

October 30, 2019 at 08:32 PM · This is the difference between the US and China: enough people here make a stink and things can change, sometimes quickly. People make a stink in China and they get harassed or thrown in jail.

Glad they changed their mind.

Here's another example of what happens when you get in bed with the Chinese propaganda machine. I didn't hear about this before, but the Chinese Government has already interfered this year with a planned tour by the Czech Philharmonic due to actions taken by the mayor of Prague that don't fall in line with China's "One China" propaganda, and did the same in 2016 over actions taken by the Slovak President.

Rossi said he made the call. But he said he talked to his superiors about it. One wonders what they said.

October 31, 2019 at 12:32 AM · Long before this was circulating the music world, I already saw the news spreading quickly through Asian-American groups. The prevailing view was Eastman was treating Koreans as second-class citizens and that they would never have even thought about excluding other minorities.

The administration at Eastman should have forseen this. Their initial decision to go forward shows how little they value the reputation of their students or the ideals that (most) classical music has stood for for centuries. It is precisely the kind of short-sighted pursuit of self-enrichment that has diminished classical music to near irrelevance.

The community's swift backlash and ensuing cancellation is redeeming, I know several Eastman students were quite vocal opposing this decision. Dean Rossi's attempt to deflect blame to the students, on the other hand, reflects poorly on him.

China's attempt to control artists and intellectuals outside of their own country is very concerning, the example of banning criticism of China in Prague from Christian's article is but one example of this. I hope if nothing else orchestras and schools realize how dangerous it is to sell their integrity for a quick RMB.

October 31, 2019 at 01:24 AM · I don’t think people realize that a very large chunk of Eastman students are Chinese and that all of the concert venues on their tour were sold out in China. That doesn’t happen for classical music in the US. It would’ve been a good educational experience without this political conflict and I think most people are losing sight of this when automatically giving in to the way the media has framed the situation to be between Eastman and their Korean students. Nevertheless, poor communication all around.

October 31, 2019 at 02:55 AM · This historical dispute goes back many centuries and is unlikely to change over a single student orchestra flying across the Pacific. Does China give visas to Taiwanese musicians since the US stopped recognizing the sovereignty of Taiwan?

October 31, 2019 at 01:29 PM · "It is precisely the kind of short-sighted pursuit of self-enrichment that has diminished classical music to near irrelevance."

I'm not aware that classical music has been diminished to near irrelevance. If it has, then I think we can cast the net much more widely for causes.

October 31, 2019 at 02:13 PM · The sad reality is that anything, and everything can be turned into a political battleground. We humans are so adept at drawing lines that separate us instead of addressing our common humanity (and the common problems that require all of us).

Yeah, the Chinese government is playing a political card. I have to wonder what would happen if the orchestra from a European conservatory were to plan a tour in the USA and among the musicians there were three from Iran. My guess is that the American government would pull the same stunt all in the name of protecting national security.

There aren't many adults in positions of political power anywhere.

October 31, 2019 at 06:10 PM · You don’t think the mayor, being a politician, not know the consequences of supporting Tibet independence? The Chinese took the bait. The musicians are punished, but the mayor’s reputation is now burnished. Everyone in politics knows Tibet is a sensitive issue with China. A smart politician knows how to manipulate it to his advantage. Go mayor!

What is the fact here?

November 2, 2019 at 05:07 AM · Joseph Galamba, thanks for letting us know that Asian Americans picked up on this issue before others in the music community and that it was seen as an Eastman-Korean American issue. I was certainly never aware of the latter.

November 3, 2019 at 02:07 AM · Paul, there are several books by Lebrecht such as Who Killed Classical Music that talk about how pursuing power and profits have caused high prices, diminished creativity, and poor public perception. Ann-Sophie Mutter also recently commented on how record companies chasing profits is damaging the art long-term.

I feel that the vast majority of musical organizations are just doing their level best to keep afloat and give the best performances they can to serve their community, but actions like this unfortunately hurt the brand of all classical music.