April 18, 2019, 11:27 PM · Welcome to "For the Record," Violinist.com's weekly roundup of new releases of recordings by violinists, violists, cellists and other classical musicians. We hope it helps you keep track of your favorite artists, as well as find some new ones to add to your listening! 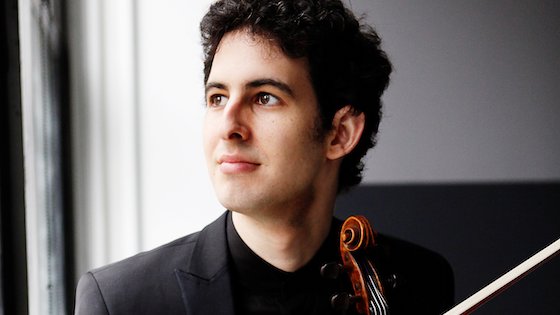 Israeli violinist Itamar Zorman, a recipient of an Avery Fisher Career Grant and joint winner of the International Tchaikovsky Competition, makes a case not only for the artistic quality of this repertoire, but also for its relevance today, in light of the composer’s immigrant experience and its impact on his musical language. The album is named after Ben-Haim’s 1942 "poem" for violin and orchestra, recorded here for the first time. BELOW: The Borletti-Buitoni Trust has made a short film in which Mr. Zorman reflects on Ben-Haim’s life and work and why he was drawn to this project.

Possessing a passion for the avant-garde and an extraordinary creative energy, Roman Mints is considered one of the most original musicians of his generation. The acclaimed Russian violinist is joined by Van Cliburn International Piano Competition winner Alexander Kobrin for a new recording of Hindemith’s Complete Works for Violin and Piano. A longtime champion of of contemporary composers, Roman Mints’s deep appreciation for the works of Paul Hindemith began when he was a young violinist, studying in Moscow in the 1980s: “This music, written not just before I was born but closer to the time of my grandparents’ birth, felt completely contemporary, and daringly advanced in its sound … From the time I put Sonata in D on the stand, I was gripped by the first subject, constructed from seconds and sevenths, marked to be played with stony defiance. I was never the same again and Hindemith became my window into contemporary music." BELOW: Paul Hindemith Sonata in D for violin and piano op.12 No.2

The violin was one of Bach’s favorite instruments and inspired his most lyrical outpourings. We know he was greatly influenced by the Italian masters whose work he discovered during his Weimar years – by the power of Frescobaldi, the melodic flexibility of Corelli, the sunny grace of Vivaldi – but he developed his own wonderful artistry in writing music of polyphonic density for the violin and “playing” with its sound palette. His deep understanding of the instrument clearly enabled him to exploit its full potential and to write as well as perform music of the utmost virtuosity. This new recording from star violinist Renaud Capuçon (following his acclaimed Cinema album) and singular pianist David Fray (whose debut album paired Bach with Boulez) explores the different colors and expressive elements of these multifaceted works. BELOW: Sonata for Violin & Keyboard No. 5 in F Minor: II. Allegro

April 19, 2019 at 08:57 PM · I can't wait to hear the Emersons with Kissin. That's going to be superb. Mr. Capucon's album cover photo looks strangely sinister, as though the two players have been caught discussing some kind of devious plan.