April 29, 2019, 1:56 PM · When violinist Anne Akiko Meyers started getting the music for a new violin concerto that she had commissioned from composer Adam Schoenberg, she was in for a rather major surprise.

"The first movement was all done in scordatura, which was a first for me," said Meyers. In other words, Schoenberg's music required that she tune one of the strings of her famous 1741 "Vieuxtemps” Guarneri del Gesù down an entire step. Specifically, the G string would be tuned down to an F. "I thought, what am I supposed to do with this? What happens? Do you read the music the same way? Or do I need a crash course on how to play the violin in the key of F, with an F string?"

"At that point, I was really looking forward to finding out: what is he going to come up with for the second movement? Is he going to have me tune back? Then I realized the second and third movement were all going to continue in scordatura!" she said, laughing. "I thought, that is very ambitious!"

By now Meyers has it well in hand; she will play Schoenberg's violin concerto, "Orchard in Fog" in two performances on Saturday with the Pasadena Symphony Orchestra, conducted by David Lockington. She premiered the work in 2018 with the San Diego Symphony and conductor Sameer Patel. She also played it last summer with the Phoenix Symphony, and more performances are scheduled for next season, including the Enescu Festival in Romania. 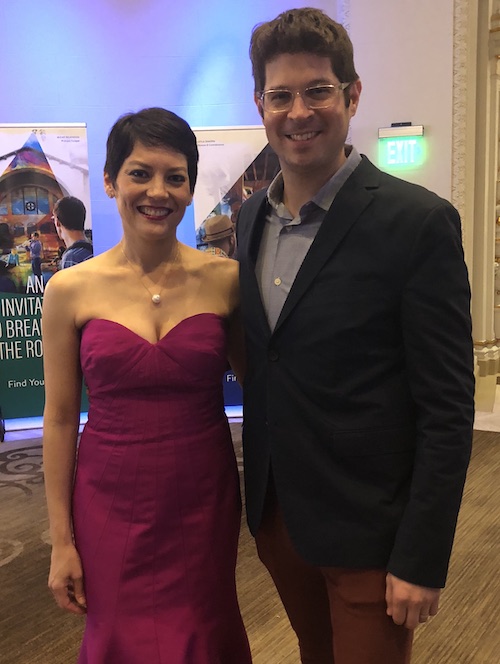 Anne commissioned Schoenberg to write a violin concerto for her after working with him on her 2015 recording Serenade: The Love Album. For that project, "I asked him to arrange 'When You Wish Upon a Star,'" Meyers said. "I just thought, his music is so colorful and soulful, how wonderful would it be to have him write a violin concerto? So I commissioned him to write this."

Why, then, did he feel it was necessary to tune the lowest string an entire step down for this violin concerto?

"Well actually, I originally wanted E-flat," Schoenberg confessed, speaking to me at Occidental College, where he runs the composition and film scoring programs. A graduate of Oberlin Conservatory of Music, with Master’s and Doctor of Musical Arts degrees from The Juilliard School, Schoenberg said that he generally requires a narrative in writing his compositions, and the narrative for this violin concerto is part of the reason for this lower-than-usual tuning.

It is based on a photograph by Adam Laipson. "He is a wonderful photographer in western Massachusetts, where I grew up," Schoenberg said. "My wife and I were married in an apple orchard in New Salem, Mass. Adam has a photograph of the orchard where we were married, but in the winter. It's this hauntingly beautiful image, and he gave it to us as a wedding gift. It hangs in our bedroom, so every morning when I wake up, it literally is the first thing I see." 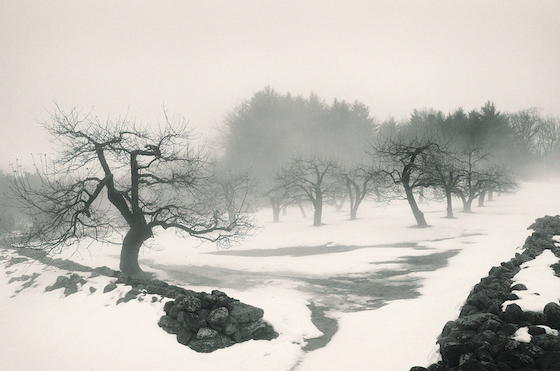 The photo inspired a scenario for the concerto in which an old man wanders back to the orchard where he was once married. He is weak and near the end of his life, and when he visits this gorgeous, haunting scene, he enters a state of reminiscence. The first movement, called "Frail," is filled with melancholy -- somber melodies that are slow and atmospheric. The second movement, "Dancing," is a reflection on the youth of his marriage, in all its happiness. This movement is "built on a layering technique, where essentially almost every eight bars a new line, or layer, or idea is being added to the structure." It builds to a high point, in which the soloist is almost improvising, and it ends in a coda, with everyone is in rhythmic unison. The last movement, "Farewell Song," sees our protagonist pass into the beyond. "In the third movement, Anne is entirely by herself. Then a chorale emerges where she doesn't play at all, which symbolizes the death. At the very end, she joins the first violins, playing the top note of the chorale as one. And then the piece fades away."

The lower tuning of the violin had to do with a feeling of being pulled back to the earth.

"I was thinking about the fact that the image, and the piece, are essentially about dying," Schoenberg said. "You're getting closer to the earth, so I wanted lower tones and lower sonorities."

Indeed, it was a challenge, Meyers said. Though she did not use special strings, she found that "the violin does constantly go out of tune, as it’s not used to being a step lower on the G," Meyers said. "It is also a strange feeling, having to play everything a step lower or higher, depending on how you look at it. It has definitely played with my brain!"

"But I understood it; the resonance of the F string brings out so many different overtones on the violin. It makes sense, musically," Meyers said. "It feels like there's a viola quality to the sound, it's so rich and deep on that string."

Every time she has played the piece, Meyers has found that "it really resonates with people. It tells a beautiful story, and it is incredibly expressive. You don't need a science degree to understand the music, and I'm all for that. A lot of the music today seems to be very scientific, and this is the complete opposite of that."

So do the orchestra violins also need to tune their Gs down to Fs and play scordatura in this piece? (This was a concerning thought for me, since I'll be playing in the second fiddle section for the Saturday concert!)

"No," she said, "I'm the only one who has to deal with this super-fastball that's been pitched my way!" (Whew!)

If you are in the Los Angeles area, click here more information about Anne Akiko Meyers' Saturday's performance with the Pasadena Symphony.

BELOW: Anne Akiko Meyers performs the violin concerto "Orchard in Fog" by Adam Schoenberg, with the San Diego Symphony conducted by Sameer Patel, at its premiere in 2018.

April 29, 2019 at 10:03 PM · Ha! I thought something was a bit off when I originally watched the video and heard Anne tuning between movements. I tried to look for evidence of scordatura while she was performing, but it was too hard to tell.

April 30, 2019 at 01:21 AM · Now we will have to have a couple of new Kreutzer or Dont studies where you tune your violin down to F and back, so that students will be prepared technically for this new masterpiece. The continual adjustments that Meyers describes are yet another reason to have the convenience and security of gear pegs.

Due to current computer troubles, I cannot hear the Interview with Adam Schoenberg, who btw, says he has No relation to Arnold Schoenberg, (my late Mom's UCLA Mentor & Pianist for then Professor Arnold Schoenberg), which he disclosed to me awhile back when we connected on Facebook ... However the fabled saying,"What's in a Name?', certainly stirs the mind of any musician!!!!

Having been required to tune down in various Concertmaster Solo's (Danse Macabre comes first to mind, & assorted solo's in Stravinsky's "The Rakes Progress", both of which I've had the pleasure playing & the latter, with the Composer there in 2 dress rehearsal's, listening!) the challenge was/and is most intriguing for nearly a full 3 Movement Violin Concerto! My own 'other' scordatura experience which one came to know quite well was French Composer, Claude Bolling's, piece for Violin, w/1 mov't Viola, + Piano, String Bass & Drum full set Combo! Composed for Violinist/Violist, P. Zukerman, one of my gifted violin pupil's (formerly having studied w/ Franco Gulli, @ I.U., Bloomington, IN) had an absolute passion for this 5 movement work & in the inner movement, the Violinist must rapidly switch to Viola to convey Bolling's 'undertow' messages of starkness. We tried tuning her violin down to F natural (string as it were) but even a fine violin hadn't capabilities of an authentic Viola! It also had to be a near 'baby sized' Viola to switch mid-way from a 'normal' size violin in a nano second to Viola plus the temperament one must mind-set employ for "The Sound" of an Ode for a departed person ...

With all stated above, I find the "Orchard in Fog" Schoenberg Violin Concerto, fascinating & very much look forward to a computer 'fix' to be able to enjoy both Laurie Niles' Interview with Adam Schoenberg, whom I've found to be a kind & most communicative person in bits of FB posts we've shared back & forth & hearing Anne Akiko Meyers' / San Diego Symphony premiere in 2018 ~ Adam Schoenberg's idea & inspiration of the Violin Concerto Title taken from the lustrous painting of Adam Laipson, housed in his own home, is intriguing to say the very least ~ To be sure Anne Akiko Meyers chose well in an American younger composer with a rather well known last name!!!! It actually occurred to me, as my own Mother was Arnold Schoenberg's Alternate Pianist, sharing demonstration duties in performing full Atonal Scores w/ Leonard Stein, for Arnold Schoenberg's most advanced classes in Theory; Form & Analysis; Orchestral Structure & Composition, that Arnold Schoenberg, himself, might find young Adam Schoenberg's Violin Concerto stimulating & if still with us, ring Adam 'S.' up to invite him 'round for a Sunday Salon at The Schoenberg's in Brentwood, which was a regular feature of Prof Arnold & Mrs. Schoenberg's lives! I know this because 'Momma' told me a lot about her over 2 year studies with her esteemed mentor, Arnold Schoenberg + stories about being his T. A. (Teaching Assistant) as well ~ My hope is to have the occasion to hear this 'Orchard in Fog' Concerto for Violin as performed by its dedicatee, A. A. M., & to meet both Composer & Soloist ~

Bravo's to All including Artist, Adam Laipson ~