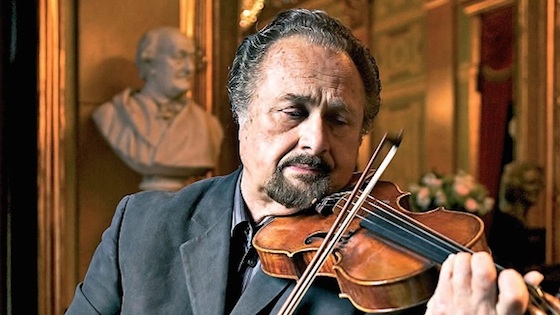 Born in Hammond, Indiana to a Russian mother and Polish father, Rosand began playing the violin at age three and performed with the Chicago Symphony when he was just 10 years old. At one point in his 77-year playing career, he had a repertoire of some 75 concertos at the ready. For 53 years he played on one of the world's finest instruments, the 1741 "ex-Kochanski" Guarneri del Gesù. He has served as Professor of Violin at the Curtis Institute for more than 30 years and at Mannes College for nearly as long. Versed in both the Franco-Belgian and Russian traditions of violin playing (his primary teachers having been Leon Sametini and Efrem Zimbalist, Sr.), Rosand was teacher and mentor to many extraordinary violinists, including Ray Chen, Stephen Copes, David Coucheron, Stephanie Jeong, Alex Kerr, Elissa Koljonen, Richard Lin, Benjamin Schmidt and Stephen Waarts.

Here are our interviews with Rosand from 2014:

Below is a 1982 recording of Rosand playing the second movement from Antonin Dvorak's Violin Concerto with the Cleveland Orchestra, Lorin Maazel conducting.

July 10, 2019 at 03:08 AM · Way back when I was a mere youngling, my parents who are not into classical music mind you, owned his magnificent CD of Sarasate. Not knowing what I was about to hear I popped it into the player while I was home alone and listened to the whole album straight thru. I was all of 8 or 9. But I cried during some of it cheered thru other parts but realized then and there that I absolutely loved what he was doing on that instrument and resolved then and there to become a violinist, and to dedicate my life to that pursuit. I have loved it every day since and credit this man for opening my heart and soul to greatest instrument ever, the violin.

Thank you so much for teaching Richard Lin ??? !

Just learned of Aaron Rosand's passing! He was always one of my favorite violinists. I studied with him briefly but intensively one summer in Nice and learned a great deal from him in a short time. His combination of great virtuoso technique, gorgeous tone, great style and panache made his playing vey special. His wonderful playing will be missed by all who were familiar with it. Fortunately, he left a large recorded legacy. Bon voyage, Mr. Rosand!

July 10, 2019 at 11:55 AM · I agree with David Zhang. Anyone in doubt can go listen to his 1970 Chicago Recital album. You'll be totally blown away. His Franck Sonata videos on YouTube are wonderful too. Rosand was a better violinist than Isaac Stern. More soulful. Rosand's track record as a teacher is pretty impressive too.

July 10, 2019 at 01:31 PM · Aaron was my teacher, friend, idol, and mentor since 1969. His magnificent playing, his kindness and generous spirit have been an inspiration to many, me included. His recording of the Glazounov Concerto, among others, is as fine as there is, including those of Heifetz and Milstein.

July 10, 2019 at 02:21 PM · Was the Maestro 89 when he played The Devil's Trill magnificently in a gala Summit Music Festival concert? At any age he created music that was almost heart-stopping in its beauty. Privileged to know him and to hear him perform as well as to witness his teaching, I can only offer my deepest condolences to his wife and musical partner and all who are feeling bereft right now. I also feel the deepest gratitude for his life.

He came one evening to my Philadelphia studio and strolled with his famous instrument for hours. Said he wanted to record there !

His Tone seems to surpass All

July 10, 2019 at 07:08 PM · He was a wonderful violinist who will be missed. I have a number of his recordings. One of his greatest pupils was NSO CM Nurit Bar-Josef. I will always be grateful to him for the pleasure I get from her playing.

July 11, 2019 at 02:43 AM · I'm deeply saddened by the passing of my violin hero, Aaron Rosand. He was a frequent visitor to South Florida, where I was always present at his recitals, concerts, and master classes. I observed him carefully from my front row seat on every occasion and learned a lot about his technique, phrasing, and bow control. He was a master of style and tone. I once sneaked into a recording session at the University of Miami's Gusman Hall in the early 1990s on a Saturday afternoon. He was recording some Liszt transcripts for the violin. Peter McGrath was the recording engineer for the Audiofon label. The recording was never released. During a break, I approached Mr Rosand and asked him why he wasn't playing his famous "ex Kochanski" Guarneri del Gesu. He was surprised and impressed that I noticed it. He pulled out his Ansaldo Poggi violin from its case, which he was using for the recording session, and handed it to me. (Thankfully, he did not hand me a bow!) I put the violin under my chin but I committed a faux pas by telling him I was uncomfortable without a shoulder rest. Well, that comment of mine lead to a 10 minute "lesson" from the master himself on how to correctly hold the violin. Since that very day, I never used a shoulder rest again. The freedom and intimacy with the instrument makes up for any slight discomfort. I will always be grateful to "my teacher" for his attention and kindness on that day and numerous other occasions. Rest in Peace dear sir. The world is greatly diminished by your passing, but greatly blessed for the 92 wonderful years you gave us and the immortal recorded legacy of your inimitable violin artistry.

What a life he lived!

I have to share a story with him. When I was doing my undergrad I played for him in a master class. I wanted to show myself in a good light (of course) so chose a piece of my Spanish repertoire so I chose Manuel de Fallas’ Suite

Populaire Espagnole. He loved it and we discussed many great ways to make it even better. I was in seventh heaven. And at the very end he asked me, “Do you know who used to own this fiddle?” And I said “of course, Paul Kochanski, who premiered this piece with de Falla at the piano” and then he asked me “Do you want to play it on it?” with a huge smile...and I did, and I will never forget that day!!

July 11, 2019 at 11:22 AM · Feel deeply sad, Maestro Rosand is my favorite violinist, and one of most brilliant curtis. He was the legend of his generation.

July 11, 2019 at 03:47 PM · Elise I'm not finding it either -- although I'm sure I watched it years ago. Maybe it was taken down for infringement. Too bad. I also don't see the CD of his Chicago recital listed among his recordings on his website but I'd swear I have that somewhere in my collection. Strike two for me!

July 11, 2019 at 04:52 PM · Very sad news and a great loss for the music world. We are bereft of a remarkable violinist and true musician. Listening to Mr. Rosand's sublime playing I feel sad and at the same time grateful for his life and legacy. May he rest in peace. And thank you everyone for sharing your stories and memories.

July 11, 2019 at 07:53 PM · I am heartbroken to hear this news. I was one of Aaron's first private students in 1968 when he was still with Eileen Flissler and we remained good friends. He was also close with my family and stayed with them in Miami often when on tour. I still perform in the Rosand style and have tons of stories about him and amazing photos from those years.

I was at all the great Carnegie Hall recitals. It has been quite a few years since I saw him last. He performed with my orchestras in Belgium in the 1970's and 80's and I used to visit him in Nice. We have lost another romantic legend. Hopefully he is partying now with Jascha, Fritz, Pablo, Ysaye, Shumsky, Oistrakh and all of the great romantics.

When I studied in his master class in the summer of 1986 (quite an accomplishment, I feel, since I wasn't born till 1997 - but I digress) he freely switched between his del Gesu and his Poggi, which he brought together in a double case. I still can recall in my mind's ear the clear differences I heard each time: the Poggi - at least in the classroom - sounded more bright, brilliant and cutting, especially on the outer strings. The del Gesu sounded darker, richer warmer and deeper, with more colors.

On the occasion of my producing my second CD I sent Mr. Rosand a copy and he was kind enough to send me this response: 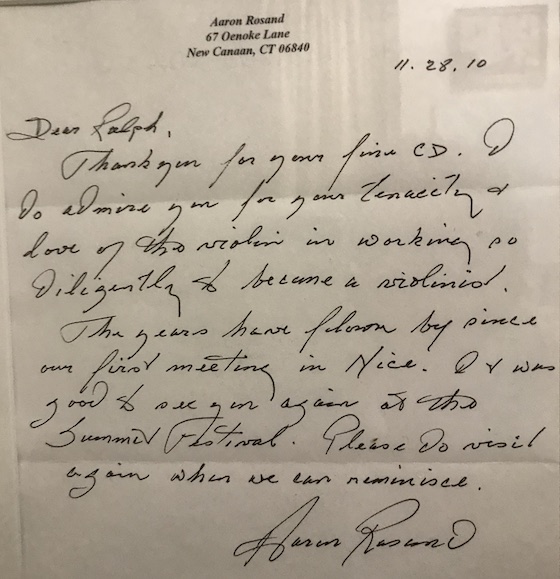 July 15, 2019 at 12:43 PM · I was Aaron’s very first violin student. I was also the only one, I believe, who went on to an important career (with the Vermeer) in chamber music. I was 15 when I started with him, then 22 when I came back for 2 more years after studying with Josef Gingold at Indiana University.

When he was 35, Aaron hesitated becoming a teacher because he feared that this was for those who couldn’t make it as soloists. I know that sounds unbelievable, particularly to his former students who know first-hand how absolutely essential teaching was for him. Thank God Eileen Flissler (his first wife – a fantastic pianist) helped him realize that teaching was one more way for him to communicate, to be generous, to discover things about himself, and to leave an enduring mark on the world. As a result, not only was my life changed, but so too were the lives of virtually all his students who came later.

It is said that life is measured not by the number of breaths we take, but by the moments that take our breath away. During his 92 years, Aaron was fortunate to draw more breaths than most. But what each of us will treasure are all those indelible moments that took our breaths away – not just in celebrated public settings, but especially in private. Even more important is that Aaron was determined to give to others the tools and the confidence to do the same kind of thing. Miss you, dear Aaron!

July 16, 2019 at 07:34 PM · What a great loss to the music world, but how wonderful to read the tributes here. My thoughts are with his family and with all who knew and loved him.