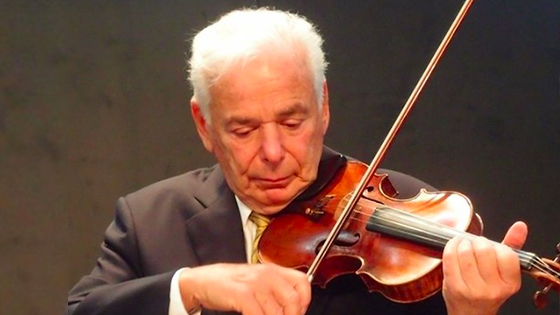 "He was an outstanding musician, leader, and orchestral contractor who was largely responsible for building the orchestra as we know it today," said MOB executive director Declan McGovern in a statement. "Although he retired in 2006, he remained very close to MOB. He loved our organization and attended rehearsals and concerts right up to the end of last season. He was kind, talented and generous. We will miss him greatly."

Born in Chicago, Golub started violin at age 10. He earned his bachelor's degree in music from the Cleveland Institute of Music in 1956, after which he joined the Army and played as concertmaster with the Seventh Army Symphony Orchestra, touring throughout Europe. In 1961 he earned his master’s degree in music from Chicago Musical College, part of the Chicago College of Performing Arts at Roosevelt University.

During his early career he played with the Lyric Opera, Santa Fe Opera, Robert Shaw Chorale, Joffrey Ballet, Grant Park Orchestra and Contemporary Chamber Players of the University of Chicago. He earned a number of awards, including the Distinguished Alumni Award from the Cleveland Institute of Music and the Otto Wirth Award for Lifetime Achievement from Roosevelt University.

"To know Elliott was to know an artistic soul, a sharp mind, and a true gentleman," said violin maker Gregg Alf in Golub's Legacy guest book. "He loved music and his generosity is still felt by all of us here in Cremona, Italy, where an exhibition of his cherished violin had recently been inaugurated."

July 24, 2019 at 06:37 PM · I was saddened to hear of the passing of Elliott Golub who was my violin teacher while I was an undergraduate student at the University of Chicago in the late '60s. Elliott was a warm, generous and kind man with a great sense of humor. He was an excellent teacher and mentor. May his memory be blessing.

I knew of Elliott Golub long before meeting him here in 'his' Chicago ~ Moving to Chicago from my residence in London, and beginning my tenure in Sir Georg Solti's Great Chicago Symphony Orchestra, Elliott Golub was spoken of frequently by CSO Principle Second Violinist, Joseph Golan, who outside of the CSO, worked closely with Elliott Golub in Chicago's busy commercial recording 'Circuit', which during the 1970's, '80's & even '90's, was a great attraction for numerous string players in need of solid work in Chicago & Chicagoland. Elliott Golub was 'The King Pin' in most hiring's of string player's, wielding considerable influence & 'power' as one of several Chief Music Contractor's in 'The City of Big Shoulders' ~ Many revered him & some even feared his dominance of the lucrative Commercial Gigs Market in the City of Chicago ...

Elliott's later involvement with the Music of the Baroque was uplifting for him, both musically & artistically, being in the 'Hotseat' of what grew to become a nationally known Music Ensemble, containing some of Chicago's finest musician's and one in particular, whom I performed with a lot whilst we grew up in Los Angeles, in the name of superb 'Cellist/Principle Cello of the MOB, & Lyric Opera Co-Principle 'Cellist, Ms. Barbara Haffner, whom I believe Elliott brought to Chicago in the mid '70's, to work here. Barbara Haffner still holds the distinction of being the youngest & most brilliant teenager ever hired by Eugene Ormandy, at a very tender age (18) to join the great Philadelphia Orchestra! Her superb musicianship & grandness of technique have been hailed in highest musical circles in Los Angeles, Philadelphia and throughout Chicago, the State of Illinois, the United States & in numerous parts further ~ Elliott Golub deserves Huge Credit & Bravissimo's in appreciating her rare talent, & bringing Barbara Haffner to work in Chicago! I know he would want this noted in Remembrance as one of his proudest artistic achievements!

Elliott Golub shall be greatly missed & spoken about for years to come by so many with whom he worked, helped & inspired ~