July 26, 2019, 5:27 PM · Some of those Bach Sonatas and Partitas for solo violin simply don't fit my fingers. Sadly, that means that I will never be able to play them. 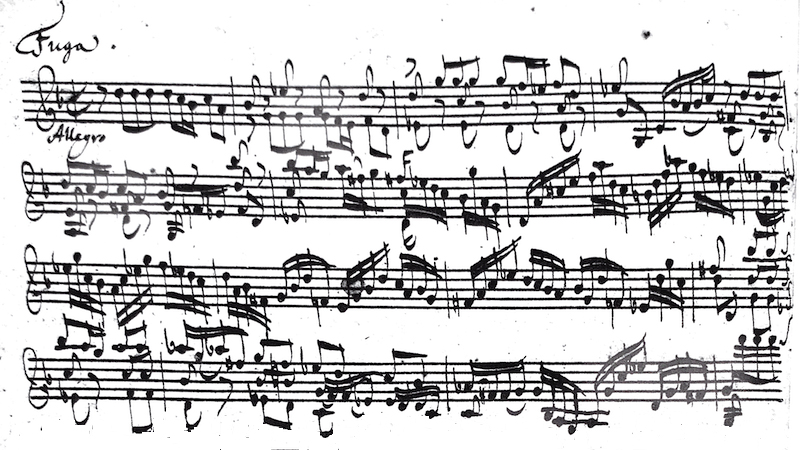 That is what I thought for years after graduating from college. Yet, I loved these works and wanted to play more than the three that I had studied -- some of them incompletely -- in college. I wished to learn all of them.

Fortunately, I was completely wrong about the "fact" that solo Bach just did not fit my fingers.

Why had I become so defeated about playing solo Bach? In my early studies, I had a number of teachers who were enamored of the Galamian edition of Bach. Those fingerings did not fit my hand, yet I felt confined to them. I struggled in frustration. Later, when I discovered that I could reject those fingerings, that I could pencil in fingerings that felt right for my own hand, that I could experiment widely to find what worked for me -- this was a huge revelation.

By now I have worked out all six of the Sonatas and Partitas, at least to the point where I have my own "Laurie edition," which fits my hands and my current intentions. I also give myself the right to change anything at any time.

Creating this "edition" for myself was a process that took about a decade. Yes, 10 years. At first, I sought input from other teachers and colleagues, especially on the Sonatas and Partitas that I had not studied in school. I also accumulated editions so that I could compare them. Besides the Galaman edition (which has Bach's manuscript in the back), I have International's Joachim/Moser edition, and my favorite, the Schott edition by Henryk Szeryng, recommended to me by the fantastic teacher Lorenz Gamma, who helped me the most in the early days this process. (I'm curious about the more recent edition by Rachel Barton Pine, which came out in 2017, shortly after her recording of all the Bach S & Ps).

After taking many lessons and gathering a ton of information, I needed to take another very important step. I needed to go through every single movement and apply my own personal judgment. Importantly, I needed to refine fingerings and bowings to fit my own hands, and to fit my own concept of how I wanted the music to sound. This often meant actively rejecting fingerings and bowings that never really worked for me, yet that were pretty ingrained in my playing. I also needed to listen and think about the feel of this music, and how I could personally bring this about.

At this point, I decided to choose just one of the six Sonatas or Partitas, and to practice it for a full year, making whatever revisions I wished along the way. After that year, I chose another one. I kept doing this until I'd gone through all six. By the end of each of those years, I felt like I had that year's Sonata or Partita "in hand." As we know, having a piece of music "in hand" is not a lasting condition! At this point, it would still take a period of committed practice for me to perform any one movement of solo Bach. But having done this work, I have my own template and roadmap that allows me to prepare this music and also to offer quite a lot of insight to my students.

Here are some things I learned along the way, that helped me learn all the solo Bach.

I hope the ideas help you on your own journey with solo Bach! Please feel free to add your own ideas in the comments.

July 26, 2019 at 11:57 PM · By all means, listen to Scott Slapin’s recording on the viola and Vito Paternoster’s on the cello. There’s masterful style, phrasing, voicing, and articulation in both those versions... To say nothing of glorious command of the instrument! AP

July 27, 2019 at 12:43 AM · Laurie, I appreciate that you remove many of the “obligatory” requirements we put on ourselves. Even when Bach’s own manuscript is below the Joachim edition, for instance, our eyes and thoughts go first to the “edition.” Sorry, Johann. The big, modern print wins, but there’s no reason to let it.

Yesterday I just happened to hear a recording on KUSC of a violinist I had never heard of playing the d minor 2nd Partita. It was very clean and accurate, and rather quick and uninteresting. I listened afterwards to Szeryng playing it and noticed how his huge, beautiful sound, which was so full of personality, informed all the ebbs and flows. The tempo was slower, but never felt slow.

Then I listened to Glenn Gould’s Goldberg Variations. This is the monument to the power of personal musical judgements.

Thank you for introducing a very important topic! Let’s all be proud of our own, well thought out, interpretations.

July 27, 2019 at 01:47 AM · Mendy here... my general approach to any piece as a 5’2” tall violist playing on a 16” viola is to try the fingerings given, then modify them to suit my hand if I need to. With Bach, I freely use open strings, something I learned to do more of when I ditched my shoulder rest for many years. For me I find 2nd position useful. It’s easy to shift to from first, using a “crawling” shift technique (shifting in 1/2 to 1 step increments rather than larger jumps).

July 27, 2019 at 02:21 AM · H. Szeryng recording of the Bach Partitas and Sonatas are for me the most beautiful James Ehnes' recording is also gorgeous.

July 27, 2019 at 10:59 AM · Your last bullet point was something that was a real eye opener for me when my teacher suggested it. Milstein was very creative with his fingerings. I recall when I was studying his recording of the Gigue from the Partita No. 3 he used a 4th finger on 'A' and an open 'E' in succession on a repeated E for effect. When studying the presto from the Sonata No. 1 I watched a video of Hilary Hahn where she started the movement on an up bow. I tried it and it did seem to help facilitate the string crossings.

July 27, 2019 at 12:03 PM · Thanks Laurie for compiling all those great suggestions! It's a wonderful journey, no? I was reading the wonderful book (by recently deceased Anner Bylsma) Bach Senza Basso, about the solo works for violin by J.S. Bach. It is such an imaginative book by a great lover of Bach. Totally original.

July 27, 2019 at 03:02 PM · The Rachel Barton Pine edition is worthwhile. Stanley Ritchie has written a good book with valuable insights for period performance.

Listen to recordings on YouTube by Rachel Barton Pine, Rachel Podger, Stanley Ritchie, Johnny Gandelsman and Sigiswald Kuijken. Pay special attention to how they play the chords. To my best recollection they never "double back" to sustain a lower voice. Bach does not need this difficult and delusional technique. The violin is not an organ. Many excellent violinists, past and present, stumble on this conceit. Bach knew how to write polyphony that the ear could parse out if performed cleanly, in tune, with decent tone, and consistent rhythm.

When playing chords pay special attention to the intonation and tone of the bass note. Chords will never sound right without a good, on the beat, in tune, resonant bass note.

Bach supplies all the art. The performer does not need to bring a big interpretive vision to render a very listenable performance.

There are a lot of movements that are no harder than Kreutzer etudes.

I second Laurie's recommendation on using a baroque bow. I started with a very cheap one. It was okay. I now have a better one that is very enjoyable to use.

July 28, 2019 at 09:37 AM · Thanks Laurie. These pieces have been "problematic" because my teacher had large hands with long nimble fingers and I have that short fourth metacarpal to deal with. Decades ago I left them in the dust - actually in the back of the music drawer.

I do tell my students to make pieces "their own" but haven't used that same dictum on myself for the Bach. I think I'll start over fresh with the long slow approach. Since I no longer have lots of obligations I have the time to address them for myself and learn a few things along the way.

July 28, 2019 at 07:08 PM · Thanks, Laurie for interesting comments and bits of advice. The only concern is about open strings: if possible, you'd better keep a voice on the same string even if you have to go to positions.

Add to your list of editions the one made by Konstantin G. Mostras. It's worth it.

July 28, 2019 at 07:57 PM · Why do you have to keep a voice on the same string? Bach didn't. There's no reason to fear string crossings--you can keep the line going. Perhaps try playing some Irish fiddle music or something, to get more fluidity with string crossings. My background in that tradition has been very useful in playing the S & Ps.

I wondered if anyone would mention using the thumb. I do have large hands, and I don't think it would work without them, but there are several chords in the Chaconne (and elsewhere) where the chord is unplayable unless you wrap your thumb around on the G string. Example--in m#202. The A-D-B-F# chord is much more effective if you aren't bouncing your first finger around while arpeggiating. Thumb on the G string and first finger on the B-F# works great. I have seen people say that Bach made a mistake in those instances, but you don't have to play much of this oeuvre to recognize that, uh, Bach didn't make mistakes on this stuff.

July 28, 2019 at 08:14 PM · I fell in love with the Partitas when I heard a recording by Hilary Hahn. I’m surprised that no one has mentioned her interpretation as one to treasure. She has a beautiful, clean interpretation that has held me captive ever since.

July 29, 2019 at 11:26 AM · Very interesting post. I use the Szeryng edition, in part because I like his fingerings. However, your admonition about trying first position and open strings is right on point because this was a wide practice in Bach's time. Finally, I find second position very useful in some places, even though many of us are less used to it.

July 29, 2019 at 04:49 PM · Thanks, Laurie. I have been struggling to play parts of Bach’s S&Ps for years. I have gotten some good advice from other people on violinist.com. Your advice is consistent with what I have learned but much more extensive. You have encouraged me to try to play these pieces again.

July 31, 2019 at 01:32 PM · I'd recommend also the Henle Library electronic edition of the Bach S&P. There is a feature that lets you overlay different sets of fingerings and try them on for size. Henle has fingerings by Midori Seiler, Igor Ozim and Christian Tetzlaff. Sometimes they're very similar and sometimes quite different in approaches.

At some point everybody should buy an unfingered urtext edition (Barenreiter or Henle) and try to take a fresh look.

For so much of the violin repertoire, not just Bach, we are reliant on editions from the early 20th century or even the 19th century.

Performance practice was so totally different in the time of Szeryng or Milstein and the editions reflect that.

Today we appreciate the beautiful clear sound first position can produce and we appreciate the ring and sparkle that open strings can add -- the 20th century masters had a greater appreciation of playing in lower strings on high positions and avoiding open strings at all cost. It's all up to the kind of musical effect you want -- everybody gets to choose for themselves.