August 14, 2020, 2:09 PM · Did Bach "sign his name" in many of his pieces? And what does "Sei Solo" really mean, on the cover page for the Bach Sonatas and Partitas for Solo Violin? Here is a conversation between violinists Gil Shaham, Vijay Gupta and me, talking about these ideas, in this bonus video from Gilharmonic on Violinist.com, Ep. 8:

Playing Bach can be like going on a musical treasure hunt. In a July video about Bach's Preludio, Gil explained his ideas about finding a chromatic scale embedded in the music. Here, Vijay says that he too has been finding new patterns in Bach, as he has been playing solo Bach every day during the pandemic.

On the topic of patterns, Gil brings up an intriguing idea that musicologists have pondered for long enough to have a name for it: the "Bach motif."

The notes in the motif spell Bach's name: B flat for B; A for A; C for C; and B natural for "H." And if you are a little confused about the H, here is the explanation: in German musical language, "H" represents B natural and "B" represents B flat.

Evidence suggests that Bach intentionally used this musical moniker (or some would call it a "cryptogram"), and used it often in bass lines and fugues. It was subsequently used in tribute to Bach in music written by other composers such as Robert Schumann, Franz Liszt, Max Reger, Ferruccio Busoni and even Arnold Schoenberg.

Going a little farther afield, one can also find a religious dimension in Bach's musical motif; namely the Christian cross. Here it is: 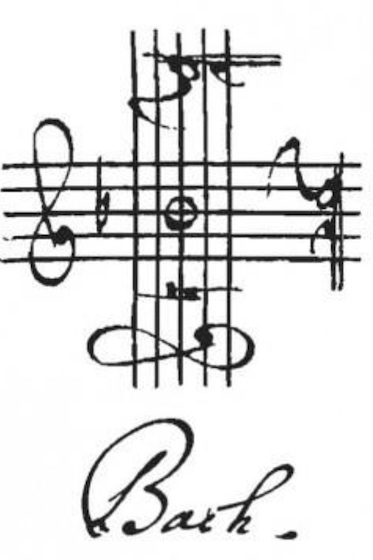 If you start at 9:00, you'll find B (B flat in treble clef); then go clockwise for A (tenor clef); C (alto clef); and H (B natural in treble clef). The consensus is that Bach did not come up with this himself, nor did he write out the image above - it was faked in his handwriting. Nonetheless, it has been widely circulated by musicologists over the centuries.

On to the idea of "Sei Solo," which Bach wrote on the cover of his Six Sonatas and Partitas for Solo Violin. What did Bach mean? Obviously, it's on the cover for "Six Solos" - but the Italian for that would have been "Sei Soli," as Bach would have known. "Sei Solo" literally means "to be alone." It makes sense that clever Bach would have created a double-meaning, in which both interpretations were intended.

Gil later pointed out to me an idea that he remembered hearing about "The Art of Fugue": that the "Bach motif" is chromatic in nature, which could be interpreted as a sign of Bach's humility. While the notes in a diatonic scale can be intervallically "perfect," representing the divine; those in a chromatic scale must be tempered, thus imperfect intervals, representing the flawed and human.

With that in mind, as well as the state of "aloneness" caused by distancing, quarantine and lockdown, Vijay recently wrote a beautiful blog on isolation vs. solitude, and you can read it on his website.

Enjoy the video, and feel free to tell us in the comments about musical "treasure" you have found in Bach, or your thoughts on these ideas.

August 16, 2020 at 04:02 PM · Are they saying playing Chromatic scales are acceptable if the key signature is in any Major?