November 12, 2021, 12:48 PM · If sonic memories are embedded in the wood of old violins, then violinist Maria Ioudenitch may have been awakening the past as she made some history herself last month, performing the Brahms Concerto on the 1714 "ex-Joachim Ma" Stradivarius violin at the Joseph Joachim International Violin Competition in Hannover, Germany, with Andrew Manze and the NDR Radiophilharmonie.

"Interestingly, it is said that the Brahms Violin Concerto was premiered by Joseph Joachim on this instrument," Ioudenitch told me, speaking from Boston in a phone interview in early November. For her part, Ioudenitch was awarded first prize in the competition, where she played not only the Brahms but also the typical staggering amount of repertoire required for all rounds of such a competition. "It was my dream to perform the Brahms concerto on this instrument - and I did it!" she said. "The instrument works so well for that, of course. But also, I've played Bach on it, I've played Mozart on it, and it fit that, too. This instrument sings with everything."

Born in Balashov, Russia, Ioudenitch grew up in Kansas City, where she studied with Gregory Sandomirsky, then Ben Sayevich. She continued her studies at the Curtis Institute with Shmuel Ashkenasi and Pamela Frank, and she is currently earning her Artist's Diploma at the New England Conservatory (NEC) with Miriam Fried.

The Joachim Competition was Ioudenitch's second big win this year - in September she also won First Prize in the Tibor Varga International Violin Competition in Sion, Switzerland. But despite two majors wins, Ioudenitch is not exactly a "veteran" of the competition circuit.

"None of my teachers have been pushy about competitions, which I've been grateful for," Ioudenitch said. "They don't want their students to turn into competition-hoppers -- it's not good for your mental health, and sometimes you lose sight of why you do what you do."

So why did she want to do these competitions?

"I want to play for people and share my love for music with people, and the only way you do that is if you have a path, if you have opportunities to do that. Winning competitions is a way to get those doors open," Ioudenitch said. At age 25, she also felt like it was simply time: "Technically, 25 years old is on the older side for competitions, even though the highest age is 32 for major competitions. But there are youngsters 16 years old, playing so incredibly well - compared to that I feel already ancient! (She laughs) So I felt like I had to get things done. It's time. I'm ready."

She also felt well-supported. "Miriam (Fried) was so supportive when I said, 'Could I do this? Do you think it's a good idea?'" Ioudenitch said. "She's not only a teacher, she is a wonderful mentor who is there with you in so many areas of who you are as a person, as a musician. During the competition she kept sending me supportive texts, 'Play your heart out!' and 'Enjoy your time on stage!' It was incredibly supportive." 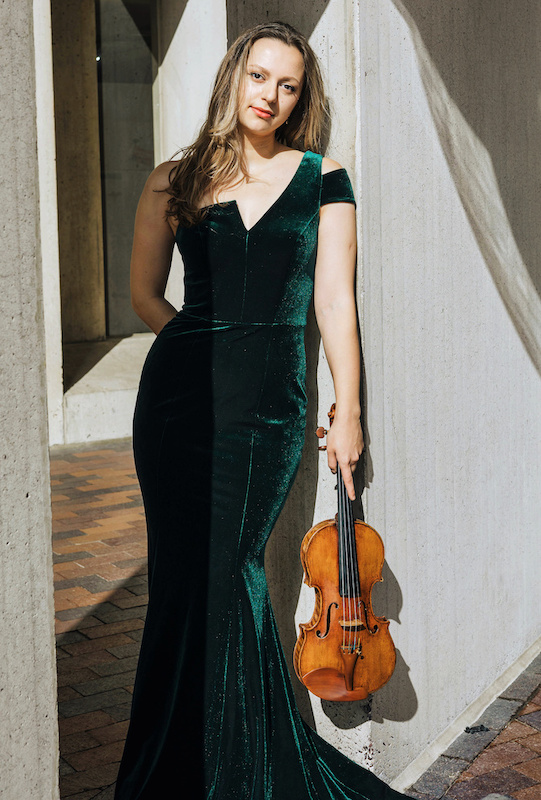 And then there was the fact that Ioudenitch had the use of that history-making Strad, which actually belongs to NEC. "I'm in the Artist Diploma program at NEC, and part of this degree is the use of this gorgeous instrument," Ioudenitch said. However, she does not have use of it full time - she shares it with another violinist from the same studio, Geneva Lewis. "We're very close friends! We share this instrument, every semester we switch off," she said. "When I'm not playing the Strad, my instrument is a Zygmuntowicz, on loan from a generous donor and friend, Mark Ptashne."

Before this opportunity, she had never played a Strad for more than a few minutes, she said. Her first semester with the "Joachim Ma" Strad was last academic year, then after a semester without it, she received it again at the end of summer 2021.

"It's so complex," she said of the instrument. "It's like a wild animal that has to be tamed a little - but you don't want to tame it too much!"

"At first it was actually quite difficult, fighting with this instrument's strong personality and trying to figure out all its strengths, limitations and possibilities," Ioudenitch said. "Then slowly you get to know it, find ways to control it, even though at first you just try to see how it likes to sing by itself. It's a delicate relationship, where the personality of this 300-year old instrument is so powerful and yet, you find a way for your own voice to speak through it."

In Ioudenitch's bio, she describes herself as "an American with a Russian heart and soul," having been born in Russia and moved to Kansas City when she was three years old. What does that mean?

"I grew up in Russian culture," Ioudenitch said. "Even though I lived in Kansas City, in my family we always spoke Russian at home and it was very much a Russian culture - and we had Russian friends. I am really proud of that heritage. But growing up in America, of course I learned a lot of American values. Going to school every day with people from here - I fell in love with that side of me, too."

She is also the daughter of two pianists -- Tatiana and Stanislav Ioudenitch. Stanislav is the founder of the International Center for Music in Kansas City, and he also teaches at Oberlin Conservatory; Tatiana teaches and runs the Young Artists Music Academy, which they also founded in Kansas City.

So why didn't she wanted to follow in her parents' footsteps?

"Well already, two pianists were too much!" Ioudenitch said, adding that her uncle, grandmother and cousin also are pianists. "So they handed me a little violin. I was three, and I was intrigued. My parents really believe in music education, so of course they had to make sure that I kept up with it for a certain amount of time."

Despite being so young, "I never did Suzuki," she said. "I just went along with what my first teacher, Gregory Sandomirsky, decided was best for me."

And while she has studied with some of the best violin teachers in the world, her parents remain active supporters in her musical life. In fact, Ioudenitch spent a lot of time, before these recent competitions, on Zoom with her mom.

"Preparation is different for everyone, but one important way to prepare before going on stage is to play through pieces and programs. It consolidates your vision, and you are more confident, the more times you play through. For me, it's especially true. So my mom offered - every day - to listen to me run through certain pieces, or even entire programs," Ioudenitch said. "In my preparation before Tibor Varga, I played something for my mom every single day. Of course, all these first play-throughs have mistakes, they have kinks to work out - that is why we do them. And my mom listened to these pieces many, many times! Both of my parents are so supportive. And of course, there are all my former teachers, without whom I would not be what I am, musically. There’s an endless list of people to thank - I'm so grateful to them."

BELOW: Ioudenitch performs a full recital in the Joachim semifinals:

November 12, 2021 at 08:43 PM · wonderful! I think she gives a very transparent and authentic interpretation of the Brahms.