December 23, 2021, 5:16 PM · When you look to the heart of music written by the great classical composers, you start to realize that this music was born of the same kind of spontaneity and experimentation that inspires improvisation, folk music, and jazz.

Sometimes when we approach music by, say, Mozart, Beethoven or Brahms, "we've put it behind glass, as this untouchable thing," said violinist Noah Bendix-Balgley. "But at the time, when these composers wrote it, they were making it up in the moment." 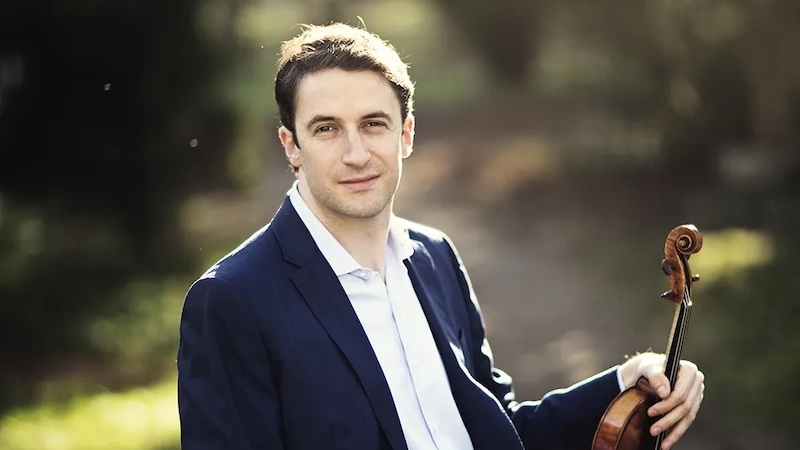 As First Concertmaster of the Berlin Philharmonic since 2014, Bendix-Balgley would certainly consider himself a classical musician -- but he's also well-versed in other genres. He has played klezmer music since childhood, recently writing a Klezmer Violin Concerto that he premiered in 2016 with the Pittsburgh Symphony, where he was concertmaster 2011 until 2015. He also plays as part of Philharmonix, made up of members from the Berlin and Vienna Philharmonic Orchestras. "We basically play everything under the sun that we would never play in our orchestras," he said, "...klezmer, Hungarian Gypsy, String, Coldplay tunes, swing, movie tunes - all our own arrangements."

I spoke with Bendix-Balgley as well as violinist Matt Pickart earlier this month about that intersection between classical music and more folk and improvisatory genres. They are promoting an online master class that Bendix-Balgley will conduct on Jan. 8, in which he plans to convey that cross-genre spirit to the classical violinists participating. You can click here to register either to audition for the master class (register by Dec. 31) or to watch it online. The class will be presented by String Masters, as part of a series by Clazz International Music Festival, a music festival that meshes classical and jazz, founded by Pickart.

"Often, the inspiration for great composers was popular music of the day, or folk music, or popular themes that were going around at the time," Bendix-Balgley said. "Our job is to try to re-create what the composer wrote, and to do so in a living, vibrant way."

But what exactly does that mean? Playing in klezmer bands alongside his classical studies gave Bendix-Balgley a unique vantage on that idea.

"I grew up around Eastern European folk music and klezmer music, through my dad's professional work as a dancer and dance teacher," Bendix-Balgley said. "I started to pick klezmer up early on - as a 7-8 year old -- at the same time as I was learning violin through the Suzuki method."

"I really enjoyed that there was an improvisational element to it," he said. "I would learn these tunes by ear, and every time, you'd do it a little differently. When you are jamming together with a band, you decide in the moment who's going to take the tune and who is going to play a counter melody or rhythm."

Even now, with a full schedule of classical-music engagements, "I make it a point always to find room in my musical life for klezmer and other kinds of music."

That's because after playing a klezmer jam session, or playing with Philharmonix, Bendix-Balgley returns to the classical stage reinvigorated with the perspective that he gains.

For example, on the day we spoke, he had just played a klezmer session with Berlin-based accordionist Alan Bern of the band Brave Old World. The two were playing through simple melodies from an archive, and as they did so, Bendix-Balgley noticed that they were actually exploring a very high level of detail in the music.

"(Bern) approaches it with the same sort of detail and care to phrasing and nuances that you would expect in a Schubert piece, or in a work by Brahms or Mozart," Bendix-Balgley said. "As we were discussing little turns of phrase, or why we like a particular melody -- I was thinking, 'It's exactly like Mozart.'"

"In the end, it's all music, and you want to make good music, you want to make music that speaks," he said. "Putting labels on it is necessary, it's something we do. But playing it well and getting to a deeper understanding of it is a challenge, regardless of what style you're playing, regardless of what genre it is. We can really expand our capacity by looking outside of our own narrow genres."

December 24, 2021 at 01:59 AM · My performances of classical pieces are all very spontaneous. I make many mistakes -- quite randomly.