I Found a Fiddler on the Roof

March 23, 2021, 2:57 PM · On Saturday at sunset I was up to the usual exciting pandemic stuff - folding my laundry in my bedroom, when I spotted a young man on the roof next door.

That was strange enough, but then...he picked up a violin! Wait what? Did I see that right? I've never seen someone on the roof over there, not since they built the place a number of years back. We live in a condo, right next to another apartment complex, so I was looking up at it, out of the little porch balcony off our bedroom. 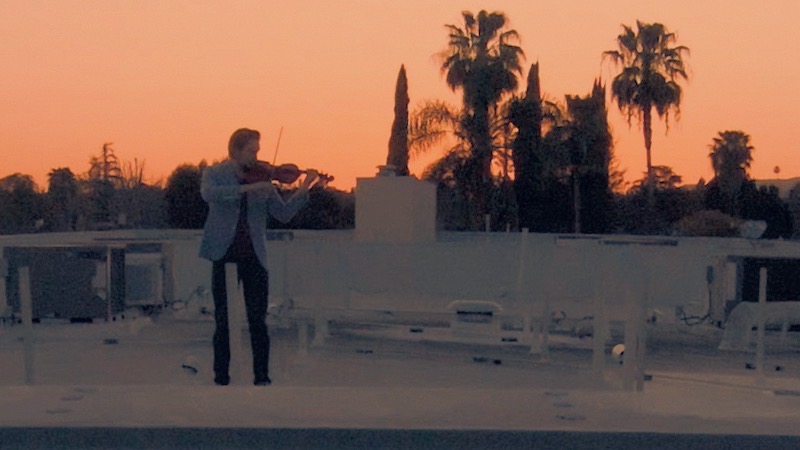 Fiddler on the roof - photo by Tom Scott.

Yes, he clearly picked up a violin and walked off, where I couldn't see him any more. Several minutes later, I heard something faint and fiddle-y wafting over the roof. Theme from Braveheart? I smiled. This is very interesting. I opened the porch door a little wider and continued folding shirts.

He changed his tune a little, playing something that goes up a fourth, then starting over, playing it again. Nice tone, and in tune. He kept starting over, and then it came into my mind, what he was trying to play: a bit of John Williams' Star Wars. Very familiar, the Force Theme leitmotif - the music that was playing as Luke watched two suns set over Tatooine. The fiddler was not getting past the first four notes, though. That's when I felt the impulse to join the effort.

I ran downstairs and fetched my violin. I returned to the open window by the balcony (it was getting a little cold out!) I played what he was playing, in the key he was playing it (D minor) and waited to see if he played it back. He did. Then I played the entire eight-bar theme, just to see if that was what he was trying to play. What pretty music that is, and it sounds lovely, low on the violin. He played back the first few notes. I played back the first few notes, plus a few more, to help him along.

Then I heard a voice, "Again?" So I played those notes again, and he fiddled around, finding the notes.

Then he appeared on the edge of the roof again, fiddle in hand. It was pretty dark, but I think he was grinning.

"You're really close!" I shouted up to him, playing it again and giving him some hints about which finger, which string, to get a little farther. We continued this for a while, then his friend also came to the edge of the roof. He apparently had a ukelele, but he was just watching this unusual interaction.

"So you play violin!" said the friendly fiddler on the roof.

"I just started! Do you know this?" he said, and then actually played the beginning of Fiddler on the Roof.

"I do," I said, playing some of it. "It works best to start on this note, though..." and we played back and forth, between roof and balcony. What fun we were having!

As it turns out, his name is Jonny Strellman, and his friend is Tom Scott. They are in their mid-20s, just a bit older than my own kids. He's actually a writer that also works in the film industry.

Jonny's been playing just a month, after receiving his grandfather's violin, with help from the Internet. Here's what he wrote about it on his Instagram: "I never knew my grandparents as well as I would like, so playing Grandpa Norb's 100-year-old violin is a connection to family history I've honestly never felt so strongly before. There's something about the faded tape stuck to the neck and the school newspaper tucked in the lining that make this experience a mix of Indiana Jones discovering an artifact, and Back to the Future - discovering your parents (and their parents) were once young punks like you."

I was very impressed by his posture and correct way of holding the instrument after just one month, and what a good ear. The whole interaction brought me back to that very first feeling I ever had about violin, which was simply, "I want to play THAT."

That was back in the fourth grade, when a little girl named Sara played the violin for my class as part of my elementary school music teacher's recruiting efforts. I felt like I recognized the violin, like you recognize an old friend.

We didn't have a piano.

I started to pitch a fit but didn't actually have to carry it too far before she conceded: "Okay, you can play the violin."

My grandmother, living more than a thousand miles away in Cleveland, caught wind of my new obsession, which only grew from that day on. I vaguely knew that my grandparents had an old violin in their dusty attic. But when, a few years later, they decided to get in a car and drive all the way to Denver just to give that violin to me, it struck me as a little extreme, if very generous. By then, I was ready for a full-sized fiddle.

Little did I know the real story behind that violin, or even behind my grandmother. As it happened, my grandmother was orphaned at age three and left with very little from her German immigrant parents. She was taken in by an aunt and uncle who refused to adopt her - to give her their name -- because she was a girl. Her brother was adopted and became an "Unger." She was not; she bitterly remained Gertrude "Geiger" until she married.

One thing her parents did leave her was the violin, but she made few efforts to play it. It sat silent for decades, until she gave it to me. It was no Strad, but it was a nice-sounding violin, and I could make it sing. It was the violin I took to college, to music school.

Some time during college, my dear violinist friend Tricia Ahern and I were having one of our long-winded talks about music, family and life. She had just returned from the Schleswig-Holstein Music Festival in Germany. I mentioned my completely non-musical family, marveling over how I somehow ended up being a musician. How did that happen? Maybe there was a clue in the violin given to me by my grandmother - it seemed to be the only link. The violin from the Geiger family.

"That was her maiden name," I said.

"Do you know what it means in German?"

The next chance I had, I quizzed my grandmother, did you know? Why didn't you tell me?

Her explanation: "It wasn't my name any more."

Oddly, now it seemed to be mine: "Violinist."

Before Saturday, I had not heard another violinist, live, in more than a year, thanks to the pandemic.

Yes, I had heard my own violin pretty much every day. I'd heard the sounds of my students through our Zoom lessons. I'd heard violinists on YouTube and recordings on my speaker. I'd made recordings accompanied by myself, played one-sided duets with students on mute, and took in concerts through a small screen and tiny computer speakers. Better than nothing, truly better than nothing.

But when I heard my young neighbor playing the violin -- it kind of awakened the old force. I didn't just hear it - I recognized it. My old friend, the sound of a violin, in real life, unfiltered, arriving literally at my door. Via a fiddler on the roof!

I actually felt like playing again. I remembered the power I hold - the power to make a beautiful old object come alive: to connect with history while connecting with the present moment.

Do you have a story about the history of your violin, or your playing? Feel free to share it in the comments.

So, do you still have that old family violin?

March 23, 2021 at 11:56 PM · What a beautiful story. Thank you for sharing, for some reason this gives me hope ( on a day we Coloradans are grieving and not very hopeful), but your story made my heart smile. And, I think as long as we have music we have hope.

Suzanne, I'm so sorry for everyone in Colorado. My daughter went to college in Denver (DU) and I grew up in Aurora, so we have many friends in the area and have been pretty glued to that news. :( But yes, I am feeling more hopeful as well.

Many years ago I played in a string quartet where one of the players lived in a five store high apartment building in Copenhagen. Sometimes we rehearsed in her flat and one day we decided to go to the roof, because the roof had a flat part where you could sit.

So we went up the staircase to the top where peoole had their storage rooms and found where you could climb up to the roof. Got the indtruments and notestands up there. I don't remember if we got 4 chairs or only one chair for the cello player.

Then we played on a nice sunny day on top of Copenhagen so to speak.

March 24, 2021 at 04:15 AM · This is a lovely story about how music connects us. I always loved that “Binary Sunset” passage from Star Wars. I identified with Luke, looking away to the stars. Sometimes you find what you’re looking for right there at home.

March 24, 2021 at 07:56 AM · I love this story. I haven't heard another string player live in more than a year, but I keep hoping I might randomly come across someone.

My violin, the only violin I've ever had, came to me in a somewhat similar way.

My start was about halfway between yours and your neighbor's. I got interested in learning the viola after hearing the Walton viola concerto in the first classical concert I attended, when I was in middle school. My parents didn't know anything about string instruments, but it turned out my long-deceased great-uncle had played the violin, and his violin had sat on a shelf in my uncle's house in Taiwan for more than two decades. On my uncle's next visit to Texas, he brought the violin over. After trying for a while to get lessons, and being rejected due to age, I eventually started self-teaching with pointers and book recommendations from friends -- which I gather from his Instagram posts is exactly what Jonny is doing. (He seems to mention that a friend taught him some of the basics on day 1.)

I switched to viola at the first opportunity, in college when I was able to borrow a viola for the entire four years. But I still have the same violin, I still play it from time to time, and I will most likely continue to play it whenever I have reason to play violin for the rest of my life.

March 24, 2021 at 08:08 AM · This story is making me think I should start practicing outdoors again. I did early in the pandemic, before a car accident forced me to stop playing for a few months. The weather's finally warm enough for it now.