April 3, 2021, 7:45 PM · When we last spoke with violinists Paul Huang and Danbi Um in fall 2020, they were locked down in their Manhattan apartment with their dearest companions: Paul's 1742 "Ex-Wieniawski" Guarneri del Gesù, on loan through the Stradivari Society of Chicago; and Danbi's 1683 "Ex-Petcheks" Nicolo Amati, on loan from a private collection - and of course, each other. 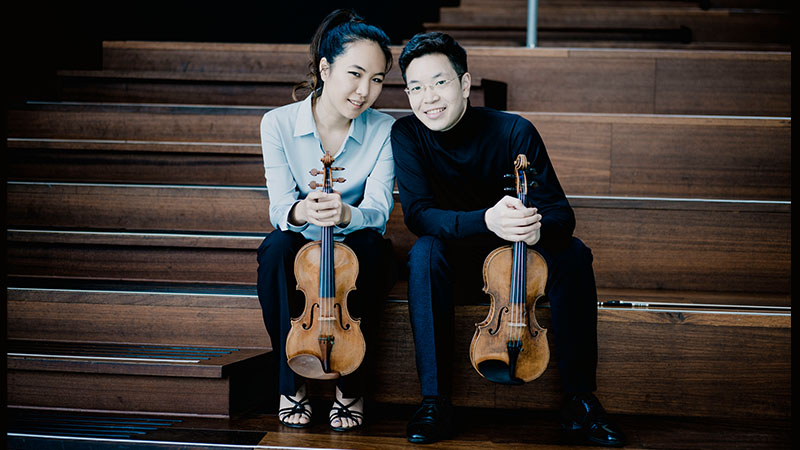 When I spoke to them last week, they were preparing for a live and livestreamed concert called Colors of Virtuosity, part of the North Shore Chamber Music Festival's "onstage/offstage," a series curated by married team, violinist Vadim Gluzman and pianist Angela Yoffe. Paul and Danbi will play together live for a small audience at Chicago's PianoForte, but the good news is you can watch their concert for free -- click here to watch.

During the last year, Paul has witnessed two entirely different worlds, when it comes to the pandemic. Long before COVID happened, Paul had been named Artist-in-Residence for the National Symphony Orchestra of Taiwan's 2020-21 season. Paul, who is a native of Taiwan, has made two trips to the country, each trip requiring two weeks of quarantine. "I’ve performed the Brahms and Walton concertos with the orchestra, as well as curating four chamber music concerts with members of the orchestra," he said. "It’s a COVID-free country, so people can go about in normal life. The halls are always full, because more than ever, people know how special it is to be able to hear live music. Taiwan never had the COVID crisis in any serious manner, because the government prevented it way before anyone had been alarmed. It also helped that we had gone through SARS many years ago, so the country was well-equipped to deal with respiratory viruses that are potentially deadly."

While concerts have been fewer and farther between when compared to previous years, "Danbi and I have also been blessed to play quite a few concerts together during this time for various presenters from the Chamber Music Society of Lincoln Center to Dreamstage," Paul said. "So I would say we have been lucky, given the circumstance."

On Friday, Paul said that their program will highlight the violin's finest features: its singing quality, soulfulness, and its brilliance. With a del Gesù and Amati in the hands of these two fine fiddlers, they should be well-equipped to do just that.

"Not one, but two violins will be showcased in this program, so there will be fireworks on stage!" Paul said. "The program starts with Mendelssohn F major sonata, a piece that’s filled with bubbly spirits, but the second movement is for me the highlight of the piece. It gives us a glimpse of the spiritual side of Mendelssohn."

Danbi will play Korngold's "Much Ado About Nothing Suite, Op. 11" as well as Bloch's "Avodah" - two pieces she found while listening to old recordings, in search of new repertoire. "It’s always a tremendous joy to come across gem pieces written by some of my favorite composers, as with the Korngold and the Bloch pieces in this program," Danbi said. "When I heard an emotional rendition of Ernest Bloch's 'Avodah' played by young Yehudi Menuhin, and a clip of Toscha Seidel’s sensuous rendition of the 'Garden Scene' in the Korngold piece, I immediately scoured the internet for the scores."

"'Avodah' by Bloch is a Yom Kippur melody, a solemn and spiritual introspective piece," Danbi said. "Korngold’s 'Much Ado About Nothing Suite' is an incidental piece to the same play by Shakespeare. Each movement depicts a scene, as each title suggests, and the third-movement 'Garden Scene' is the epitome of wearing-your-heart-on-your-sleeve kind of piece, constantly changing between endearment and sensuality."

"Danbi and I will join together for the second part of the program, first with a sonata by Ysaÿe for two violins," Paul said. "Ysaÿe, a great master violinist himself, clearly knew the possibilities of the violin and was able to capture the essence of the instrument. What is so great about this piece is that he amplified this by writing for two violins, with eight strings!"

"We also wanted to convey the soulful quality of the violin, so we decided to add a very soul-searching piece by Amy Barlowe called 'Hebrew Elegy for Two violins,'" Paul said. "And to finish off the program, we couldn’t help but to bring back our favorite piece, the 'Navarra' by Sarasate. We hope to send a strong and positive message to the audience at the end of the concert, tunes people will remember while walking out of the hall - or signing off the computer!"

On Saturday, you can watch their program for free, compliments of the North Shore Chamber Music Festival, by clicking here. The program will be streamed at 8:30 ET, 7:30 p.m. Central, 5:30 PT, 6:30 MT. The streaming window will appear on the page 24 hours before the concert.

The North Shore Chamber Music Festival is making plans for this summer, to belatedly celebrate its 10th anniversary season, which would have been last summer. Their program is planned for June 9, 11, and 12.