July 9, 2021, 3:35 PM · Welcome to "For the Record," Violinist.com's weekly roundup of new releases of recordings by violinists, violists, cellists and other classical musicians. We hope it helps you keep track of your favorite artists, as well as find some new ones to add to your listening! 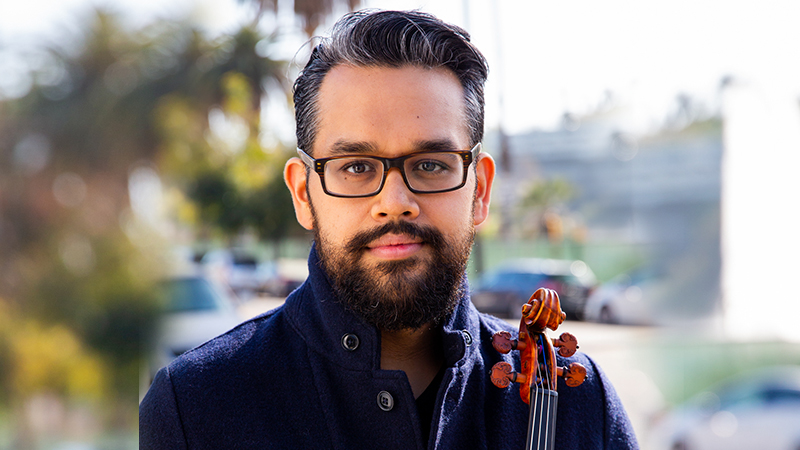 You may remember when violinist Vijay Gupta performed the beautiful piece by Reena Esmail, "When the Violin" in his appearance last year on Gilharmonic on Violinist.com. This week, Gupta is releasing an entire album by the same name, featuring not only that piece but also Esa-Pekka Salonen’s "Lachen verlernt" and J.S. Bach’s Sonata No. 1 in G minor. A 2018 MacArthur Fellow and Founder of Los Angeles’ Street Symphony, Gupta is releasing the album on his newly created label "Vidya Projects." He has dedicated the album, with its themes of solitude, loss and forgiveness, to "the thousands of people in reentry from incarceration from the 35 prisons across California." BELOW: Gupta performs "When the Violin" at All Saints Church in Pasadena, Calif. during the COVID-19 pandemic.

Throughout his career, Ilya Gringolts has devoted himself to performing contemporary music as well as the great concert repertoire, while also developing a keen interest in historical performance practice. His newest album title is "Ciaccona," and besides Bach’s iconic composition, Gringolts plays a further two chaconnes – or three if one counts the "Ciacconina" which opens Heinz Holliger’s brief cycle, composed for Isabelle Faust in 2014. The Spanish composer Roberto Gerhard wrote his Chaconne using his own take on twelve-tone technique. In his introduction to the album, Gringolts describes its twelve movements as including "everything from chorale to ländler … probably the most Viennese music ever written by a Catalan." The album closes with Kontrapartita by the French composer Brice Pauset, "a kind of through-the-looking-glass Bach partita," Gringolts said. Pauset composed his work in 2008 – seven movements, each written with a particular movement from Bach’s partitas for solo violin in mind. For this work and the interwoven movements by Bach, Gringolts has chosen to use a violin with a Baroque setup. BELOW: Ilya Gringolts performs the Ciaccona from Bach Partita No. 2:

Mikhail Pochekin and Ivan Pochekin perform Mozart's Sinfonia Concertante and Concerto No. 5, with cadenzas by pianist Robert Levin, who modeled them after those written and handed down by Mozart himself for his piano concertos. Mikhail Pochekin studied with Ana Chumachenco at the University in Munich, he is a prizewinner of many international competitions, including Pablo Sarasate, Jasha Heifetz or Rodolfo Lipizer. BELOW: Brothers Mikhail and Ivan Pochekin perform the "Presto" from Mozart's "Sinfonia Concertante":

Heitor Villa-Lobos’s three violin sonatas date from a key period in his career: the moment at which he matured as a composer, established his personal idiom and achieved his first professional triumphs. Each sonata shares some influence from French late Romanticism or Impressionism, as well as revealing Villa-Lobos’s skill as a string player. The First Violin Sonata’s subtitle of Désespérance ("Despair") suits its melancholy lyricism, while the "infinite abundance of musical ideas" in the Second Violin Sonata is characterized by a wide range of emotions. The sophisticated Third Violin Sonata is steeped in the influence of Debussy, but also anticipates Villa-Lobos’s new directions in the 1920s. BELOW: Violin Sonata No. 3, W171: II. Allegro vivace scherzando:

"We thought about what the dream album could be..." said violist Nathan Schram, "and this idea just started to ?ower; to bring all the different electronic music we listen to, into our string quartet world and to collaborate with a lot of different musicians, particularly Mike League, while using all the possibilities of music technology to make the biggest string quartet album we could. We all dug really deep into our interests and abilities and created an amazing, experimental, rocking, touching album that is Real Life." BELOW: Official visualizer video by Attacca Quartet, performing "Real Life," by Louis Cole: