Conversation with Violinist Chee-Yun: Life on the Road

July 14, 2021, 4:02 PM · If you want to live the dream of being touring violin soloist, you should know that you'll do most of your actual dreaming in hotel rooms.

Violinist Chee-Yun has spent most of her adult life on the road, and last month she spoke at the Starling-DeLay Symposium on Violin Studies about what it's really like to be a violin soloist - complete with the frequent travel, hotel rooms, occasional loneliness, and constant effort to maintain your chops -- all while always striving to help cultivate the audience base. 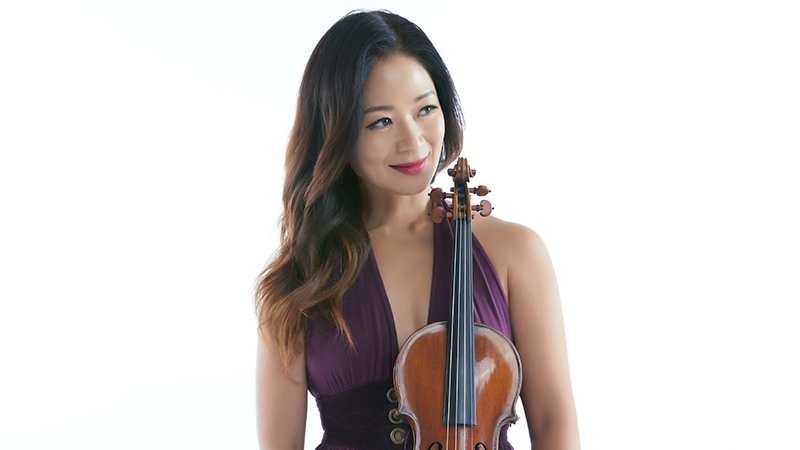 With Symposium Artistic Director Brian Lewis asking the questions, Chee-Yun spoke to us from Steamboat Springs, where she had just finished a morning rehearsal for a concert at the Strings Music Festival, where she later performed Vivaldi's Four Seasons in one of her first post-pandemic live concerts. For someone who has done so much touring, she found the summer of 2020 very strange - staying at her home in Dallas for two of the three months of summer. While the old generation took time off during the summer, "we never take time off," Chee-Yun said. The regular season is simply followed by summer festivals, and to have a summer nearly "free" was very unusual.

Chee-Yun is happy to be getting back to normal this year, which means a lot of time away from home.

A native of Korea, Chee-Yun came to America in 1983 at age 13 to study with legendary Juilliard teacher Dorothy DeLay, for which the Symposium is named. The youngest of four children, Chee-Yun loved studying with DeLay at Aspen and then Juilliard Pre-College, where she was surrounded by other talented people.

"Ms. DeLay was always super-kind," Chee-Yun said. "There was no negativity. If you played well, she would sit back and beam. She'd think about who you could perform for -- or even invite people to the lesson. It was like you were auditioning at every lesson. But it was a kind of positive pressure."

"No pressure, no diamonds!" Lewis interjected.

"She wanted us to be deep musicians," Chee-Yun said. "She expected artistry. It was an incredible lesson."

DeLay also helped her students find their way to the concert stage, and she advised them on how to behave when they did.

"She taught us how to handle ourselves," Chee-Yun said. For example, "you are in work mode, the minute you leave home. Once you get off the plane, you need to be nice to the artistic liaison - that person might one day be the artistic director."

Being a naturally social person has helped Chee-Yun, because another important part of the job is to interact with people, from audience members to orchestra members to patrons. Playing is really only about 15 percent of it.

"I don't mind meeting audience members - I enjoy it," Chee-Yun said. "That's part of the responsibility of being a soloist. You also need to talk to patrons and to say thank you." DeLay always insisted that her students write thank-you notes after soloing with an orchestra - something Chee-Yun still does.

She also enjoys socializing with orchestra members and going to eat with them after rehearsals.

After so many years of this peripatetic lifestyle, "I have 'parents' in various cities," she said. In other words, she has gotten to know some orchestra patrons so well that she simply stays with them whenever she is in town. "Then when I go places, I know people," she said.

"Making connections makes it feel like we have family on the road," said Lewis, who also has lived the touring-musician lifestyle. When he is on the road, "I miss my pillow!"

What does Chee-Yun miss? "If I can't find spicy food, I don't like it," she said.

Lewis said that he once was on the road for 30 straight weeks. Chee-Yun said that for her, she has had years in which she has spent 260 days on the road.

Being on the road also means practicing on the road. "I practice with a mute," Chee-Yun said, so as not to disturb other hotel guests. And staying in shape means being consistent and warming up with care - yes, even for a soloist. At age 51, "it takes longer to warm up," she said. She starts with slow scales, arpeggios and finger exercises. "If I don't warm up, my fingers ache," she said. Physically, you need to be loose. She does vibrato exercises to help with that. Sometimes she will do note-by-note practice, which involves playing one note at a time, with no vibrato, mezzo-piano, no rhythm, just tuning into every note.

"I prepare as best as I can, that's all I can do," Chee-Yun said. When it's time to walk out on stage, it helps to embrace the spirit of musical collaboration. "We're making music together - if you go in with that perspective, everything will go well," she said. It also signals to the other musicians on stage that you wish to work together. If there is discord, "I can't withstand it or play well," she said. "Having positive energy is important."

July 14, 2021 at 09:14 PM · I'm really curious about Chee Yun's experience studying with Nam Yun Kim, who must be one of the great teachers in the world on the basis of all her impressive students.

I heard Chee Yun playing the Tchaikovsky a few years ago and I remember really noticing a lot of variety of tone colors in service of a very lyrical performance.

July 15, 2021 at 03:33 AM · Fabulous interview! Chee-Yun, I love how you have a musical family wherever you go! My family had a lot of fun spending with you in Kansas.