July 22, 2021, 11:47 AM · VAIL, Colo. - Greetings from Vail, Colorado! For the next few days I'm going be exploring the Bravo! Vail Music Festival, a summer event that has been bringing together fine orchestras and artists from all over the world to this ski town in Colorado's Rocky Mountains for some 34 years. 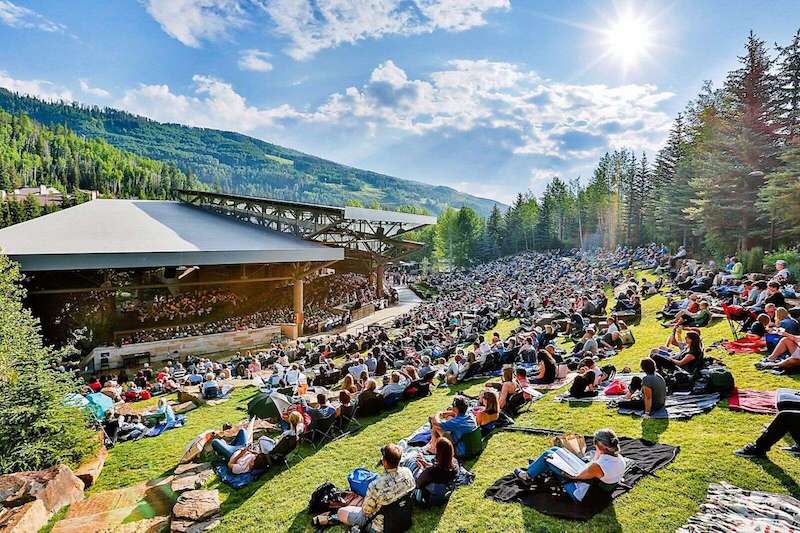 After last year's limits due to the pandemic, this year brings a full schedule of in-person concerts, and they have quite a prestigious and impressive lineup. Bravo! Vail kicked off in June with a week-long visit from The Saint Paul Chamber Orchestra and Joshua Bell, followed by the Dallas Symphony Orchestra. After that came the Philadelphia Orchestra, and this week I'm lucky enough to be here for the New York Philharmonic. Guest artists this summer have included some of the best, with violinists Joshua Bell, James Ehnes, Gil Shaham and Augustin Hadelich; as well as pianists Conrad Tao, Jean-Yves Thibaudet, Daniil Trifonov, and Yefim Bronfman.

I actually arrived here late Tuesday afternoon and -- before even checking into my hotel -- went straight to a concert that featured the New York Philharmonic String Quartet, with concertmaster Frank Huang, associate concertmaster Sheryl Staples, and and principal players violist Cynthia Phelps and cellist Carter Brey. 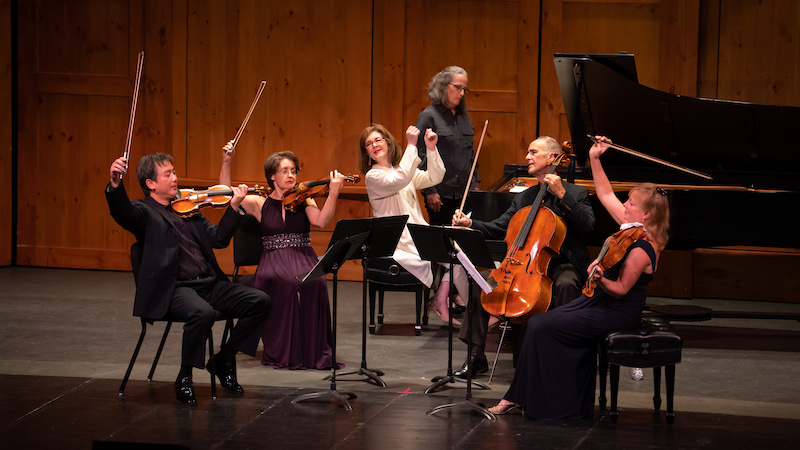 After a fully-masked day of travel, first on an airplane and then on a shuttle bus, it felt like a small miracle to attend a live event at an indoor performance venue, with no masks, few restrictions and the feel of a normal concert. I've only attended a handful of in-person concerts since the pandemic restrictions have loosened, and I'm still adapting to the new feeling of being in a crowd, sitting side-by-side, and hearing music coming straight from the instruments of the people making it, rather than through the tiny speaker in my laptop.

In fact, Bravo! Vail Executive Director Caitlin Murray distilled my feelings well in her opening words on stage at the Vilar Performing Arts Center in nearby Beaver Creek, where the concert took place: "Live concerts are something we will never again take for granted," she said. "There has been absolute magic in the air at Vail."

Indeed, after being starved of the acoustic sound of ensemble playing for so long during the pandemic, I found myself spellbound by beauty of sound that this quartet of consummate musicians could create. On the program were two works: Mendelssohn's String Quartet in A minor, Op. 13 and Robert Schumann's Piano Quintet in E-flat major. Op. 44, in which they were joined by Bravo! Vail's Artistic Director, pianist Anne-Marie McDermott.

But of course their talents went well that gorgeous cushion of sound that opened the concert. These musicians are constantly attentive to one other, highly alert, and man, can they bring the goods. They also kept enough tension to keep things interesting - Brey holding things steady, Huang on the edge of the beat. Their ability to synchronize even the fastest of runs with each other was stunning - I especially noticed it in the first movement between Huang and Staples - then later in the Schumann between Brey and Phelps.

In the Mendelssohn, the most exquisite moments came during the third movement, which was full of precision ensemble work and well-balanced sound. The music was delicate and fast, and it fit together like fine clockwork. The final movement was sheer drama, with Mendelssohn giving each instrument a moment in the spotlight. The quartet sustained a high level of intensity to the end.

Next came the Schumann quintet, and McDermott joined at the grand piano to perform with the four NY Phil musicians. I could only think, how can someone who is Music Director for this entire summer festival also get on stage and perform at such a high level? Looking through the festival's offerings as well as her bio, McDermott ("Annie" as she is known around here) is a prolific performer, appearing throughout the summer, not only for chamber concerts such as these, but also as a soloist, in educational concerts, etc.

She won me over immediately, and I gathered that the string players on stage felt the same, from the smiles that appeared with frequency on stage. Suddenly the music-making seemed a little more playful. Of course, Schumann's familiar Quintet lends itself to enjoyment, the way, for example, that the first-movement melody sneaks around and pops up in various instruments.

As McDermott explained from stage, Schumann had dedicated the piano quintet to his wife, the great pianist Clara Schumann, who was to perform at its premiere in 1842. However, Clara fell ill, and apparently Felix Mendelssohn "sight-read" at the piano -- a feat that is difficult to believe, based on the complexity of this work's piano part!

The five musicians took the second-movement funeral march at quite a clip - making it a bit less-funereal sounding. Of course, it is a funeral march with a lot to say - Schumann puts his musical ideas through their paces, and when taken too slow it can really drag on.

The third movement felt right on the edge - a lively scherzo buzzing with notes, and after this came vigorous applause. (Honestly, I enjoy a little applause between movements, when people are loving what they are hearing. Even it is not what audience members are officially "supposed" to do!)

The fourth movement also had a sense of humor to it, at times even sounding like laughing. Overall, the evening ended with a real sense of joy and satisfaction.

I'm looking forward to more Bravo! Vail, and in the near future I'll be bringing you more articles, including how this festival invented the pop-up "Music Box" concert during the pandemic last year, when they created a mobile stage - inspired by the concept of the "tiny house"! There will also be an interview with NY Phil cellist Carter Brey; with the festival's Executive Director, Caitlin Murray; and with the Viano String Quartet, the young quartet formed in 2015 at the Colburn School who were featured in Bravo! Vail's chamber concerts as well as community and educational concerts.