September 9, 2021, 4:03 PM · When it comes to works for violin alone, J.S. Bach practically defined the genre with his monumental gift to violinists, the Six Sonatas and Partitas. He did the same for solo cello, with the Six Suites. And one of the most quintessential of Bach's works for solo violin is certainly the "Preludio" from Partita No. 3 in E major.

The "Preludio" is one of several works that violinist Brian Lewis spotlighted in a pedagogy lecture called "All Alone: Repertoire for Solo Violin" at last summer's virtual Starling DeLay Symposium on Violin Studies at Juilliard. Lewis is the longtime Artistic Director of the Symposium, as well as Professor of Violin at the University of Texas-Austin's Butler School of Music. 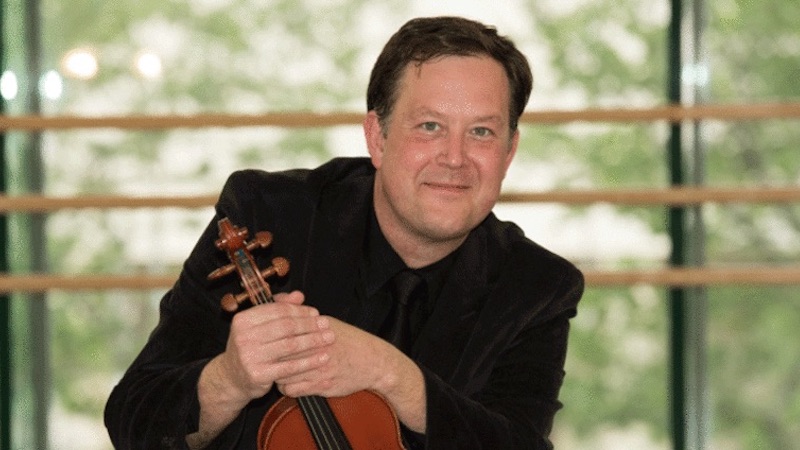 Violinist and Pedagogue Brian Lewis.
Why did he choose to focus on works for violin alone? Because many violinists turned to those works during the pandemic, when opportunities to play in orchestras and ensembles came to a complete halt.

"As we are coming out of this pandemic time, what inspires us?" Lewis said. "As musicians and teachers, we give a lot of energy away. How do we keep some for ourselves, how do we feed our souls?"

For a lot of musicians, the late cellist Pablo Casals foremost among them, Bach has provided that oasis for the musical soul. Casals played solo Bach every day - something Lewis also recommended. "Ten minutes a day will feed your soul," he said.

Lewis also talked about other solo repertoire, which will be the focus of another blog. For his first lecture, though, he took a deep dive in to the first movement of Bach's Partita No. 3 in E major, the "Preludio."

First he talked about an issue that relates to any of the Sonatas and Partitas: which edition to you use? It's great to have an urtext edition, such as Henle or Barenreiter. An "urtext" edition hews strictly to the composer's original markings. The Galamian edition has Ivan Galamian's fingerings (controversial ones, I'd add - they seldom work for me!) but it has something very important and extremely useful - a copy of Bach's original manuscript in the back of the book. "You can't get any more original than the manuscript!" Lewis said.

When it comes to assigning the Preludio to a student, "I probably would not give them the Preludio without fingerings," Lewis said. Students will need at least a starting point to get going with this piece, and that can be a teacher's fingerings, if not the fingerings in a particular edition. That said, students can - and should - be encouraged to make a lot of their own choices.

For example, in the very first measure: the Galamian edition keeps the eighth notes on the E string with some backwards extensions. But another common solution is to simply stay in fourth position, which gives us a string-crossing, but that puts that string crossing in the same place as when it happens an octave lower in the next measure.

"Both solutions work," Lewis said, "so you can let your student decide." Giving students several viable options is a way of granting decision-making power without completely throwing them in the deep end on their own.

Another note about fingerings in Bach: "If you can play it in first position and it sounds good, then great," Lewis said. No need to shift unnecessarily.

And what about the bariolage - the tricky string-crossing passages that have the violinist toggling between two and three strings? First, try practicing the string crossings on open strings, without fingers. For the three-string bariolage, economy of motion is key. "Our home base is the A string," Lewis said. "We're going to see what is the smallest movement needed to get to the other strings." Students can start learning this bow motion on open strings well before they start learning the piece.

"We break it down because it's a very complex bow stroke," Lewis said. As for the fingerings, "when it doubt, block it out. Doing a lot of blocked-fingers practice will instantly raise your playing ability." For the two-string baroliage at m. 13, that means simply playing it without the repeated "E" and being solid in each position.

For the three-string bariolage that begins in m. 17, blocking would involve playing just the notes on the D and A strings, as double-stops, just leaving out that open E.

Using a Baroque bow can help with all the string crossings, as it is weighted so differently.

"Baroque bows are getting easier to obtain," Lewis said. He lucked out on a $43 Baroque bow on e-Bay, but there are also excellent and inexpensive options from Shar and even from Amazon.

"By all means, use a Baroque bow, the weight and balance is so different," Lewis said. And if you can't obtain a Baroque bow, you can get the feel of a Baroque by choking up on the bow, putting the thumb on the steel winding of a modern bow.

Also, the many "pianos" and "fortes" in this movement are not just editors' markings - they are markings by Bach himself that you can find in the manuscript. "Bach actually wrote in dynamics, and that's interesting," Lewis said, as Bach did not often write in dynamics. "That is a lot of instruction from Bach for dynamics. He's looking for contrasts."

And Bach is pretty particular in the way he places those dynamics - for example, in m. 13 the "forte" is after the downbeat, not on it, and the same goes for the "piano" in m. 15. Why? We might look to an often-overlooked detail in the first measure: the piece actually begins with an eighth rest:

So when Bach places the dynamics on the second eighth of the measure, "he's imitating what he wrote at the beginning," Lewis said.

There are a great many repeating patterns in this movement, and "you'd better do something to make it musical." As Dorothy DeLay once said about the many movements of Bach that have repeated sections: "Only take the repeat if you have something new to say."

Something worth noting is the passage near the end of the Preludio - at m. 109 is a sudden change of color and texture. Up until this point, most notes have been separate, but at m. 109 there are a lot of slurs. The slurs feel like an exception to the rule at this point, so it's important to bring this out. "One way to highlight something is to be soft - we don't always have to be loud," Lewis said.

At m. 113 you can "connect the dots" - you could literally take a pencil and connect the dots in the notes, then follow that shape for your musical line. When the line goes up, get louder; when it goes down, get softer.

As for the end of this movement, the first note in m. 130 is such a strong cadence, it sounds like it could be the end - but it is not, the music dives back into a lot of harmonic change.

Another big landing is on m. 136 - that E could also end it. For the very last measure, there are all kinds of options for bowings, but Lewis likes Bach's own bowing the best, slurring the first three notes of each group of 16ths.

Another thing to note about Bach's Partita No. 3 is the fact that the last movement, the "Giga," "is one of the most accessible movements in solo Bach," Lewis said. If you can play the Vivaldi Concerto in A minor (which appears in Suzuki Book 4), you can play the Giga. This would be a way to get an intermediate student an early start on solo Bach.

September 10, 2021 at 10:42 AM · hmmm I finger the beginning differently: I play the first measure in 4th, second measure in 3rd, (and third measure in 1st). the switch from 4rd to 3rd position I find it very natural, placing an adjacent finger at the same spot as the other finger but on the adjacent string is (I believe) one of the typical ways to play fifths anyway, and here you even have plenty of time to execute this cleanly.

In the Texas classification of solos for high school students, “any movement” from the Bach S&P counts as Class I difficulty, so I frequently use the E major Giga for an intermediate student who wants to play a class one solo. It also works well for a more advanced student whose harder solo will not quite be cooked enough in time for the local solo and ensemble. They can qualify to state on the Giga and then play Mendelssohn or whatever for the state solo and ensemble contest.

September 13, 2021 at 03:59 PM · The E-major Giga was the "Study" for Associated Board Grade 7 (in place of the usual Mazas, etc - even my ALCM some years later had a Mazas) the year I took it (the other 2 pieces being Mozart 3 1st movement and Beethoven C-minor slow movement - unprecedented musicality for an Associated Board syllabus!).

Ideally I'd like to play the first 7 notes of bar 129 on the E-string, but I find it too risky and end up playing all but the 1st note in the 4th position.

If I'm going straight on to the next movement (Loure, not to be confused with Laurie), I like to finish the praeludium with a diminuendo.