That is how violinist Eugene Fodor signed a photo that he gave to his teacher, Harold Wippler - a photo that hung on the wall of Wippler's Denver music studio for many years. Fodor (1950-2011), who famously won the top prize in the 1974 Tchaikovsky Competition, also studied with Josef Gingold, Ivan Galamian and Jascha Heifetz. But he always gave enormous credit to Wippler, who taught him from ages eight to 18.

Harold Wippler, longtime concertmaster of the Denver Symphony Orchestra and extraordinary teacher to numerous violinists around the world, passed away on October 8 at age 94. 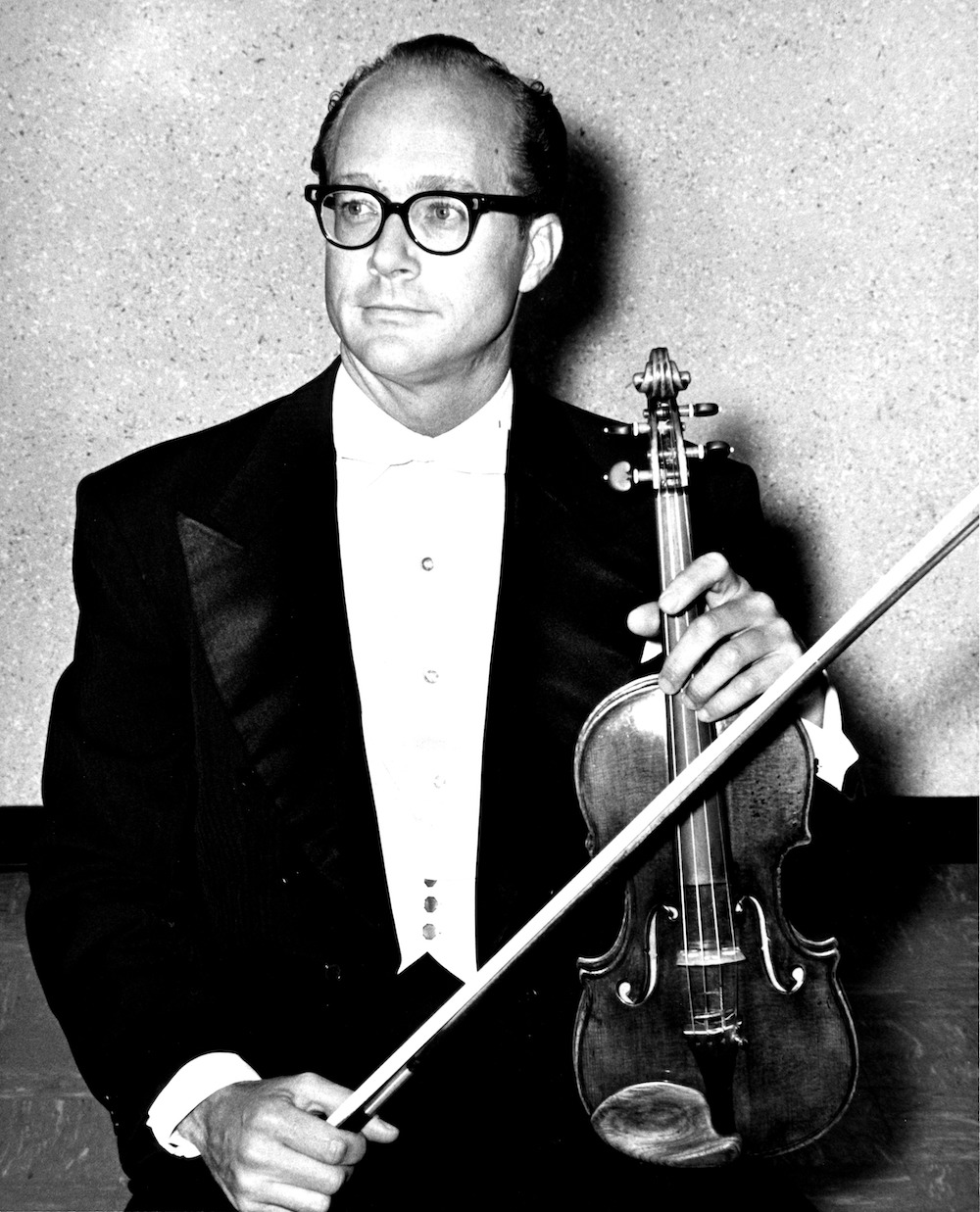 Born in Los Angeles, Wippler first started learning the fundamentals of violin from his father, Hans Wippler, when he was just two years old. Later he studied with Bronislaw Gimpel, former concertmaster of the Los Angeles Philharmonic. He made his first solo appearance at age five, and at age 14 he performed as a soloist with the Los Angeles Philharmonic, playing Lalo's "Symphonie Espagnole." That same year he won a scholarship to the Curtis Institute, where he studied with Efrem Zimbalist. After graduating from Curtis he returned to Los Angeles to become concertmaster of the Hollywood String Ensemble.

He joined the Denver Symphony Orchestra in 1948 as assistant concertmaster, remaining in that position for four years before becoming concertmaster of the Kansas City Philharmonic. In 1955 returned to Denver, along with his wife, Charleen, and they both joined the DSO - he as concertmaster, and she as a member of the first violin section.

Wippler was concertmaster of the DSO until the 1960s, when he suffered a skiing injury to his shoulder. He remained in the orchestra as assistant concertmaster, then as a section first violinist, until he resigned in 1987.

"I was lucky to know Harold as both a wonderful colleague in the Denver Symphony and a warm, caring, and dedicated teacher," said violinist Paul Stein, who played in the Denver Symphony from 1976 to 1981. "I had a few lessons with Harold and remember vividly how much more active my left hand felt after spending time with him. He truly loved to teach, and I trusted him completely to only give sound advice. I’ll miss him as one of the greatest musicians I’ve known. He was so easy to talk to. He was a rare individual whose modesty and professionalism made him a much beloved concertmaster."

But it was Wippler's skill and reputation as a teacher that made violinists travel to Denver from around Colorado and all over the world to take lessons from him in the basement studio at his home near City Park. Besides Fodor, some of those violinists included Desirée Ruhstrat, Todd Ehle - and me.

Ruhstrat, now a concert violinist, member of the Grammy-nominated Lincoln Trio and lecturer at Northwestern University, was just eight years old when she traveled from her home in Milwaukee to Denver to play for Wippler, a potential new teacher recommended to her by Fodor.

"I remember playing the Mendelssohn Concerto for him and then he asked me to play an E minor scale," Ruhstrat said. "At the time I had never been taught a scale, so I did not even know where to begin. Despite my lack of scales, he agreed to take me on, and for the next nine years guided me through lessons, competitions, and tours in the U.S, and Europe." 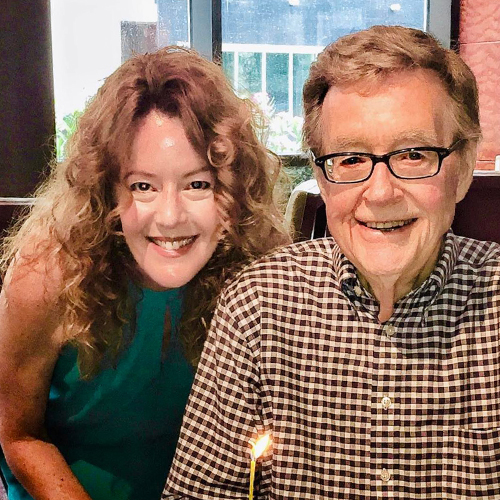 "I became a part of his family, occasionally staying in Laguna Beach, California at his parents, 'Papa Hans' and 'Nana Bertha,'" Ruhstrat said. "He and his father Hans - who was also a violinist - shared tales of Hollywood orchestras, endless wonderful stories of Heifetz, Milstein, Francescatti, Kreisler, to name only a few." Hans counted Heifetz as a sailing partner, so there were many tales of Heifetz. "I remember anecdotes from what one might call the "golden years" of violin." Harold Wippler would talk about his days at Curtis, where his classmates and friends included Aaron Rosand and Joe Silverstein. 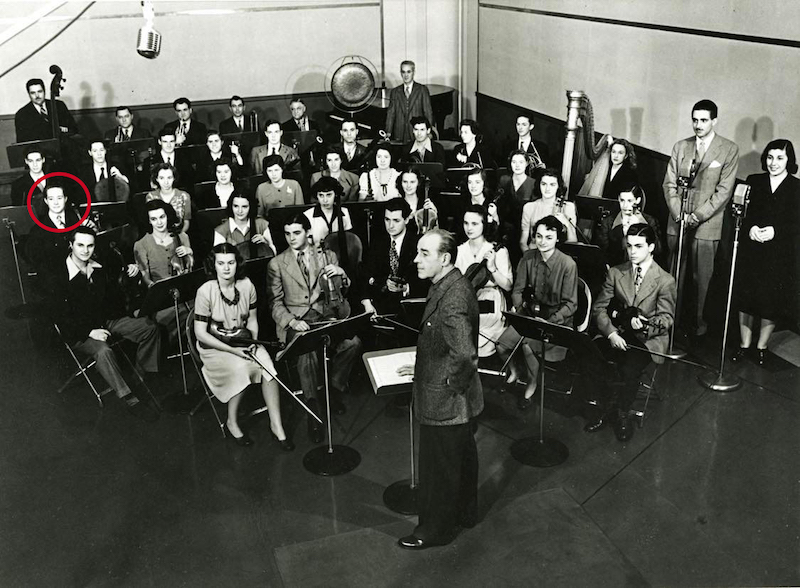 Harold Wippler at Curtis. Seated in front of him is Aaron Rosand.

"Many of these legends were captured on his basement studio wall, in fantastic black and white photos," Ruhstraht said.

"I remember his patience, his attention to detail, and the way he could pinpoint the problem and have a solution," Ruhstrat said. "Not to mention that he knew every piece of solo, chamber and orchestral music inside out and most of it by memory! One of my fondest memories would be the excitement I felt when he would go to his floor-to-ceiling music cabinet and pull out a new piece. It was always beautifully bound, so you could not see the 'new' piece until he opened the cover!"

"But most of all, he gave me musical guidance, while still allowing me the opportunity to create my own ideas and options," she said.

"Mr. Wippler was a wonderful teacher," said Corpus Christi, Texas-based violinist Todd Ehle, who teaches at Del Mar College and is known for his technique videos on Youtube. Ehle worked with Wippler in the '80s, covering pieces such as the Mendelssohn Concerto, Wieniawski Concerto No. 2, and the Vieuxtemps Concerto No. 5. "He gave clear and concise instructions on how to approach the technical hurdles, as well as ideas to help me develop a sense of the needed 'style.' My father would drive me to Denver, wait in the car, then take me to lunch after, making each lesson a major event. Through a mixture of historical information and performing demonstrations, I found Mr. Wippler to be an incredibly inspirational teacher, and when I could get him to say, 'That's not too damn bad,' I'd be ecstatic."

Denver-based Suzuki violin teacher Arlette Aslanian said that "he was one of the best teachers I ever had in my life. He perfectly balanced the teaching of musicality along with both right hand and left hand technique. One really got a full picture and a complete education with him. Artistry was always first and the technique then needed to support it." She said that just last week she had just been teaching the Mendelssohn concerto - a piece she had studied with Wippler, whose markings were still there. "His legacy will live on with our students."

I also have a copy of the Mendelssohn Concerto - full of markings from Wippler. I studied with him as a senior in high school, back in the mid 1980s, and then I continued to take occasional lessons post-college, for coaching on auditions.

Even with decades between lessons, the experience felt the same - familiar, comforting, and yet demanding and intense. To get to his home studio, I remember walking down the long driveway to the back gate, then down a set of steep stairs to the basement door. In the center of his studio was a wooden music stand, positioned so that one could avoid bowing into the silver pipes running along the ceiling. And there was a little fireplace, on the mantle a ship and pictures of Schubert and Wagner. On the walls were those pictures: Paganini, Kreisler, Milstein, Heifetz....there were even several funny photographs of Brahms, one with a giggling teenage girl. There was a large picture, set on a diagonal, of Wippler talking to a conductor. Over his violin hung his 1947 diploma from Curtis.

When tuning, he always started with the E string rather than the A - because it was the string least likely to go out of tune. I can remember some choice lessons, including one in which he explained that sautillé bowing - though it may involve a bouncing bow - has nothing to do with gravity. To prove his point, he leaned over until he was playing his violin upside-down, and demonstrated a perfect sautillé!

"His pedagogical work with Eugene Fodor, and his inclusion in 'The Way They Play,' Book 3, by Samuel and Sada Applebaum, made him legendary to me," Ehle said. "But his kindness and encouragement made him even more special. I'll always be grateful for my time with him."

Wippler was preceded in death by his wife Charleen, in 2011. He is survived by his daughters Linda Kay Will and Heidi Ann Truscott, as well as four grandchildren and four great-grandchildren.

To celebrate and carry on the Wippler legacy, the family welcomes donations to the Harold & Charleen Wippler Violin Scholarship Fund at the Denver Young Artists Orchestra (DYAO) (phone: 303-433-2420), an orchestra that Wippler was instrumental in starting and where many of his students participated and enhanced their musical journey.

October 24, 2022 at 01:16 AM · What a beautiful post, Laurie, in memory of your former teacher, especially the remembrances that you gathered from his former students, some of whom are "household names" in the world of violin-playing.

October 24, 2022 at 06:38 AM · Simply beautiful, Laurie. Like every violinist who grew up in Colorado, I stood in awe of Harold Whippler. I had the good fortune to meet him several times. The DSO did a residency at my university every two years, and the university's choir sang with the DSO on a few occasions. Mr. Whipper was always kind, gracious, and the epitome of a fine orchestral player. I wanted not only to play like him, but to BE like him. He was a gentleman in every sense of the word. And his teaching, of course, was in a class of its own.

October 25, 2022 at 12:33 AM · Lovely tribute, Laurie! I was fortunate to take some lessons with Harold Whippler when I was a member in the Colorado Symphony and preparing for other orchestra auditions (2002) He had come highly recommended and for good reason. I loved working with him - he was very kind and he helped me see and feel the music within a very giant list of excerpts. I loved working with him - he reminded me in his demeanor of Roman Totenberg, my teacher in graduate school.

October 25, 2022 at 12:44 AM · This is a beautiful tribute, Laurie. Thank you for sharing your thoughts and of course for gathering those of others!