TwoSet Violin to Perform on Stradivaris with the Singapore Symphony

October 31, 2022, 4:10 PM · If you'd like to see TwoSet Violin funsters Brett Yang and Eddy Chen get serious and perform a concerto, on the concert stage, with symphony orchestra, on invaluable Stradivari violins - then mark your calendar for November 16 at 19:30 Singapore time. 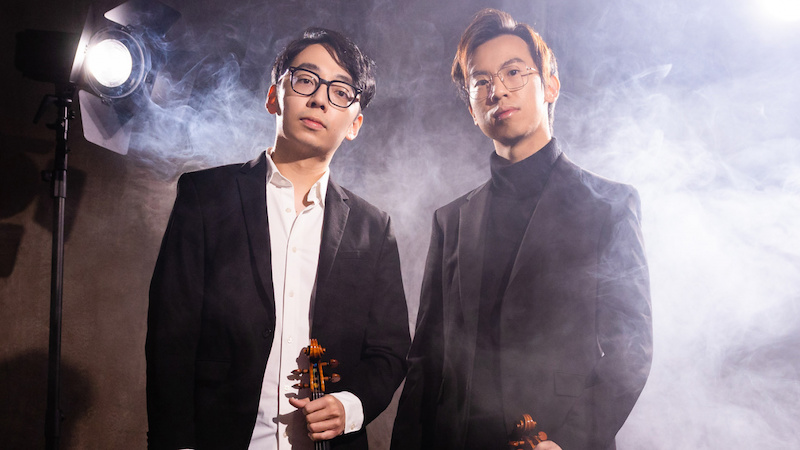 That is when the Australian comedy duo will officially celebrate their Youtube channel approaching four million YouTube subscribers, by performing a concert with the Singapore Symphony Orchestra and conductor Rodolfo Barráez at Singapore's Victoria Concert Hall. Naturally, tickets to this popular pair's live concert sold out in a matter of two minutes, but you are still in luck: the livestream will be shown for free on the TwoSet Violin YouTube channel and on the SSO's Facebook page.

"Being a classical violinist, it's like a dream come true to be able to play with a professional orchestra and on Stradivarius violins," Brett said. "It will be streamed for free for everyone around the world. We hope more people in the future will give classical music a chance."

Meanwhile, they are keeping the hilarity (and a bit of controversy) going on their Youtube page, check out their latest, "Paganini - 'Sell Out'" official music video - a parody Blackpink’s "Shut Down." :

I did a little Q & A e-mail with Brett, and so here is what he had to say!

Laurie: When do you actually get to start practicing on these Stradivari violins - how long do you get to play with them?

Brett: We are playing on two golden age Stradivari violins both made in the same year of 1708. They also happen to be both a one piece back, it's cool to imagine that these two violins may have been on Stradivari's working bench at the same time. We will be playing on the Regent Superb and Empress Caterina for the Mendelssohn 4m live stream concert. Shout out to Tarisio for loaning these magnificent instruments to us.

Brett: We have talked to many soloists about playing these great instruments and their answers seem to be very accurate! The violins kind of tell you how to play them, if you force too much sound they won't give it to you. It requires a balance of weight and bow speed to make sure the instruments sing. There's also an exquisite sound on both the Stradivaris we have, the colours in the sound are so full it totally changes the perception of sound. We both play Widenhouse violins, they are beautiful instruments. 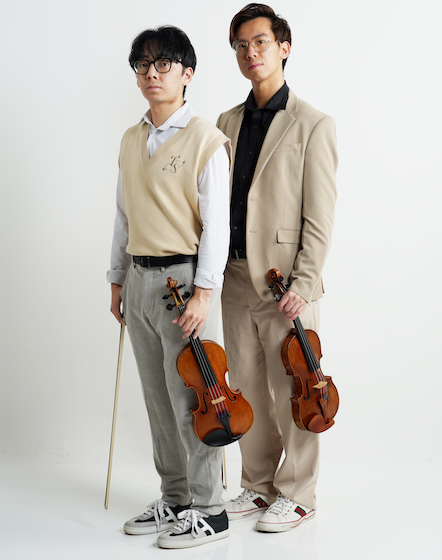 Laurie: A spooky question: Does either Strad have a ghost in there - lol! But seriously, sometimes people feel a presence of history, or of previous players. Any thoughts on that?

Brett: Haha we wish for a ghost that will auto tune our intonation in real time. It's really incredible to think that these violins were there when Bach was alive...! One of the violins was owned by royalty dating all the way back to Empress Caterina of Russia...Like wow, history is in our hands. Kind of cool!

Laurie: Which one of you is playing the Mendelssohn? or is it somehow both of you? :) What do you enjoy most about that piece?

Brett: I will be playing the Mendelssohn and Eddy will be joining for Bach double after.

I think most classically trained violinists know the concerto, so it felt like a long distance relationship being reunited, even though I had never learnt this piece. I started learning it a few months ago and I'm glad that I have the opportunity to perform this piece!

Laurie: I noticed you are playing the Bach Double. What is your favorite movement? What makes it still fun to play this piece, even after all the childhood trauma that we all have tied up in this piece? ;)

Laurie: Will there be hilarity at this concert, or is it a fairly straightforward classical concert?

Brett: Will let everyone find out!

Laurie: Just to clarify, is this the first time you guys have played with the Singapore Symphony Orchestra?

Brett: Yes our first time! They have been great to work with!

Brett: Keep an eye out!

Laurie: Anything to add?

Brett: Shout out to all the fans, it’s just such an honour to be able to do what we do! We have a lot of new projects coming up we can’t wait to share!

November 1, 2022 at 01:36 AM · Brett is the soloist for the Mendelssohn. But the programme provides opportunities for both to play.

Mozart - Overture to the Marriage of Figaro

November 1, 2022 at 07:35 PM · It's an odd programme if it's intended to showcase two talents. What's the Mozart overture got to do with it? Who plays the Bach D minor with a symphonic body of strings nowadays?

...programme with a Scottish/romantic flavour, giving each of the boys a chance to shine fairly equally. The last movement of the Bach D minor would make a good encore if delivered at a fair lick.

I think that the Bach Double is a rather obvious choise when you have two violinists that are so used to work and play together.

November 2, 2022 at 12:09 AM · Richard, as a Twoset Fan, it’s because the main focus is Brett, playing Mendelssohn, rather than Eddy, who had his turn when they reached 3 million subscribers. I’m sure something as spectacular as this will happen when they reach 5 million to give Eddy his spotlight.

November 2, 2022 at 01:10 PM · I love the Mendelssohn Violin Concerto and I absolutely love the Bach Double! I always enjoy watching serious TwoSet performances, so I will definitely be watching the live stream! What a journey these two have had!

November 2, 2022 at 01:14 PM · I thought they were going to play it together in unison - That way they'd have to take Leia Zhu's findings (and Mendelssohn's instructions) to heart, big time!