November 15, 2022, 2:06 PM · Congratulations to musicians Hilary Hahn, Time for Three, PUBLIQuartet, Dover Quartet, Neave Trio, and the Attacca Quartet, as well as all the nominees announced Tuesday for the Recording Academy's 65nd Grammy Awards, which will be presented Feb. 5 at Los Angeles' Crypto.com Arena. 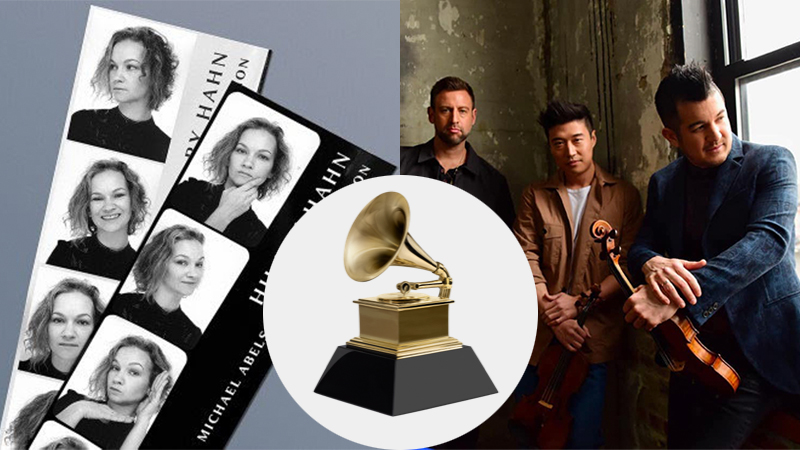 Hilary Hahn and "Time For Three" were nominated in the "Best Classical Instrumental Solo" category. The PUBLIQuartet, Dover Quartet, Neave Trio, and Attacca Quartet were nominated in the "Best Chamber Music/Small Ensemble Performance" category. A number of compositions for strings also were also nominated for "Best Contemporary Classical Composition" and conductors and ensembles for "Best Orchestral Performance" - see list below.

Here is a run-down of some of the recordings that earned nominations for string players and music:

"This is a very special piece to me," Abel said. "It seemed as if the music was already present in the ether, and I was merely transcribing it. I am not sure where this music came from, but it was clearly meant to be here for Hilary Hahn to play." The piece was commissioned in 2020 as part of Hahn's virtual residency with the Philharmonic Society of Orange County. "We commissioned a new solo encore, something I could continue performing when in-person concerts would return," Hahn said. Hahn is currently Artist-in-Residence with both the Chicago Symphony Orchestra and Utah Symphony. BELOW: Abels' Isolation Variation.:

Letters for the Future
Time For Three
The Philadelphia Orchestra, Xian Zhang conducting

String trio Time For Three (TF3), which includes violinists Nick Kendall and Charles Yang and bassist Ranaan Meyer, has been praised by Simon Rattle as "benevolent monsters, monsters of ability and technique surely. But also conveyors of an infectious joy that I find both touching and moving." Their album, recorded with the Philadelphia Orchestra, comprises world premiere recordings of two technically demanding and musically virtuosic concerti for trio and orchestra by two Pulitzer Prize-winning composers: Jennifer Higdon’s 2007 Concerto 4-3 and Kevin Puts’ new piece, "Contact." BELOW: By composer Kevin Puts: "Contact" - 2. Codes (Scherzo) (Excerpt):

What Is American
PUBLIQuartet

The New York City-based PUBLIQuartet explores the resonance between contemporary, blues, jazz, free and rock-inflected music - all of which trace their roots back to the Black and Indigenous music that inspired Dvorak’s "American" String Quartet. The album features the world premiere recording of Roscoe Mitchell's CARDS 11-11-2020 as well as music by Vijay Iyer and Rhiannon Giddens; and reimaginings of works by Antonín Dvorák, Ornette Coleman, Tina Turner, Betty Davis, Alice Coltrane, Ida Cox, and Fats Waller. BELOW: What is American?" 4th movement, based on Dvorak's "American Quartet":

The Dover Quartet, which holds residencies at Northwestern University’s Bienen School of Music, The John F. Kennedy Center for the Performing Arts in Washington, D.C., and Curtis Institute of Music in Philadelphia, presents its three-volume complete Beethoven quartet cycle with the six Opus 18 quartets, often cited as the epitome of the classical string quartet as developed by Haydn and Mozart while foreshadowing Beethoven’s future innovations. The timing of the album’s release is a nod to the worldwide celebration of the 250th anniversary of the German composer’s birth. BELOW: The Dover Quartet performs Beethoven String Quartet Op. 18 No. 4, Mvt. 1 in 2017:

This album includes Rachmaninoff’s Trio Élégiaque No. 1; Brahms’ Piano Trio No. 1, Op. 8; and Ravel’s Piano Trio in A minor, Op. 67. Rachmaninoff’s early first piano trio was inspired by Tchaikovsky’s trio in A minor. Brahms’s first trio was inspired by the composer’s (unrequited) feelings for Clara Schumann. Ravel’s only piano trio was composed in 1914, as France was being drawn into the horrors of World War I. BELOW: Trailer from the album.

Eastman: Stay On It
Wild Up; Christopher Rountree, conducting

Click here, for the entire list of 2023 Grammy nominees. Please feel free to highlight any nominations that stand out to you, in the comments section.

November 17, 2022 at 01:46 AM · Congratulations to all! The PUBLIQuartet is especially impressive considering, aside being amazing players creatively promoting social justice, they can improvise together as a quartet!