November 18, 2022, 12:49 PM · It takes a serious musical education to turn a child's basic interest into the true gift of musical fluency as an adult. Most kids in the U.S. simply don't get that - even the ones studying an instrument or fortunate enough to have some music education at their schools.

That is one of the reasons why Eugene and Vera Watanabe founded the Gifted Music School in 2009, in Eugene's native Salt Lake City, Utah. It wasn't to teach "gifted students" - it was to provide that gift for as many children as they could.

Earlier this year, I went to Utah and visited the Gifted Music School. I saw kids taking private lessons; participating in Suzuki group classes; playing in beginning orchestras. There were public school children learning the basics at an after-school outreach program; advanced young musicians playing chamber music and preparing for performances; and kids in theory and ear training classes of all levels.

It was pretty darned impressive. 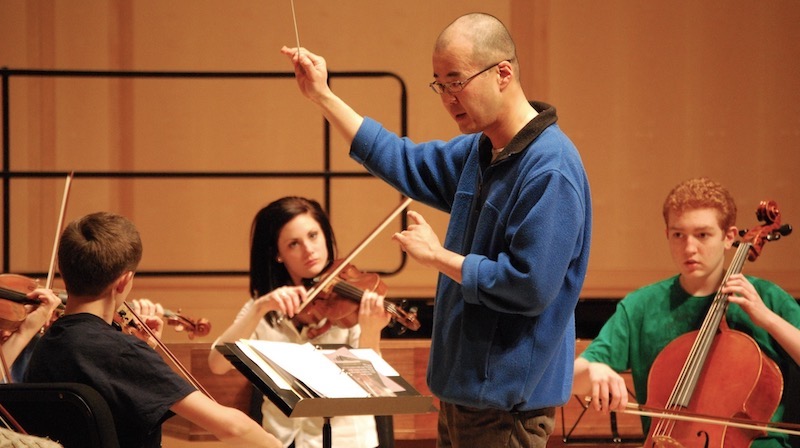 Eugene Watanabe working with students at the Gifted Music School.

That early absence of serious musical training is something Eugene started to recognize when he was a young adult. In his 20s, he'd already achieved a lot as a musician - he had earned Bachelor's degrees in both piano and violin performance from the eminent Curtis Institute, and he had some serious repertoire in his fingers.

"I was pretty proud - by the time I was finished with my undergraduate degree, I had played six or seven Mozart piano concertos - there are 27," Watanabe said. And how about Bach's Prelude and Fugues? He could play maybe six to 10 of them.

Then he met Vera Oussetskaia - who would later become his wife. What he learned about her Russian training made his jaw drop. 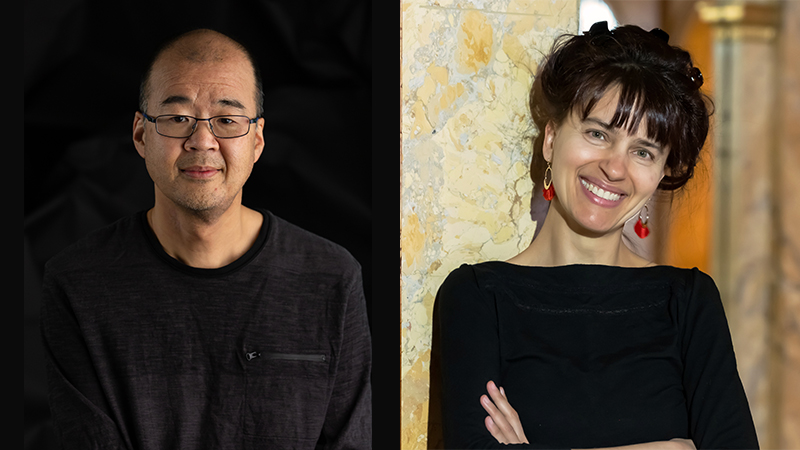 She'd already studied all of those 27 Mozart piano concertos. She could learn a new piece in a fraction of the time it took him to learn a new piece. And she already knew all 48 Preludes and Fugues.

"Of course! It's part of the training," she told him. And by training, she meant the pre-college training she'd received in Russia, which included ear-training, theory and history in addition to performance training. "In solfege class, you memorize separate lines of the fugues, every week. You sing it in solfege, you play it."

And it wasn't just Vera; he found this to be the case in other musicians with Russian training - because of their early system of education, they possessed an entirely different level of proficiency, like the fluency of a native speaker. "The musicians that are trained in that system - there's a very different learning, because they learn it as a language," Watanabe said. Their ear for dictation was incredibly well-refined. "Vera could listen to an exposition of a classical sonata or a Prokofiev Sonata - and with a number of hearings, she could get it all."

In the United States, it's completely different, Watanabe said. An American-trained musician might not study theory and music dictation for the first time until college. And let's be honest: a student who begins music dictation and theory analysis as an undergraduate is not really expected to achieve true proficiency or mastery in those skills. That student is only expected to get good enough to pass a certain bar.

Before college, there is no consistent system in the U.S. (apart from a few choice institutions around the country) for learning this knowledge and these skills. Certainly, Eugene did not come to college with the level of training that Vera had.

"Certain students who are extremely gifted may reach that proficiency, with or without some kind of system, but for the vast majority, that doesn't come naturally. You need someone to teach you, and that needs to involve some kind of system," Watanabe said. "I think that was the greatest eye-opening experience, to understand this difference in our education systems."

By now the school they founded - Gifted Music School (GMS) in Salt Lake City - has hundreds of pre-college students in three main programs: a Preparatory program that includes beginners and Suzuki; a full-scholarship outreach program in several public elementary schools called Project GRIT (Growth, Resilience, Instinct, Tenacity); and a Conservatory program - an advanced program into which both Preparatory and GRIT students can metriculate. Recently Dr. April Clayton replaced Eugene as Artistic Director of the school, allowing Eugene to commit more time to teaching and board activities on behalf of the school.

The idea of GMS is to form an integrated pathway of musical education, from preschool through high school graduation. 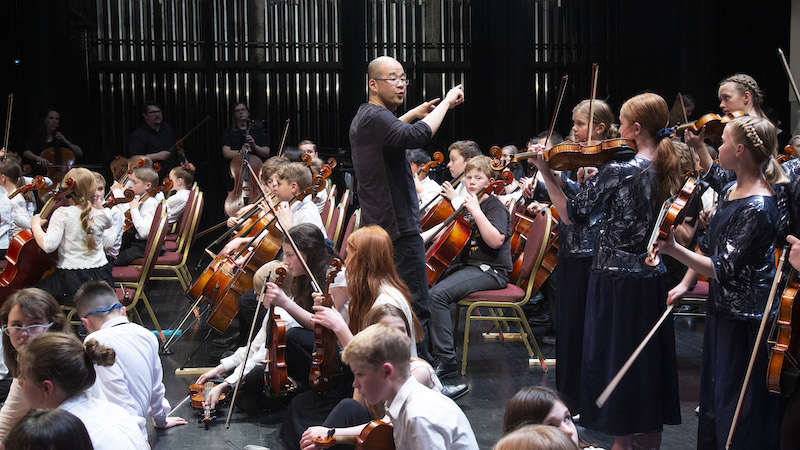 Eugene Watanabe conducting a "Pathways Concert," which brings all GMS students together.

"We feel strongly that music should be accessible at the highest level, from the very beginning," Eugene said. "Not just to those who can afford it, or who are near a program. That is why we started it as a full-scholarship program, that is why the GRIT is full-access for those students, that is why we work hard to accommodate as much as possible for Preparatory."

But they also have another goal: community. What I found remarkable, when visiting the school, was the feeling of camaraderie, and the idea that striving for excellence was not about competition. Instead, it's a good-natured and mutually beneficial endeavor. While a high percentage of GMS students wind up at top schools like Juilliard, Curtis and Stanford - there is something else going on, here.

"GMS Students aren't constantly worried about who is more prepared or who sounds the best," said violinist and faculty member Shenae Anderson. "Instead, they cheer each other on and are inspired by those who succeed. These students truly bask in the opportunity to play with each other and have fun. And isn't that what music is all about?" 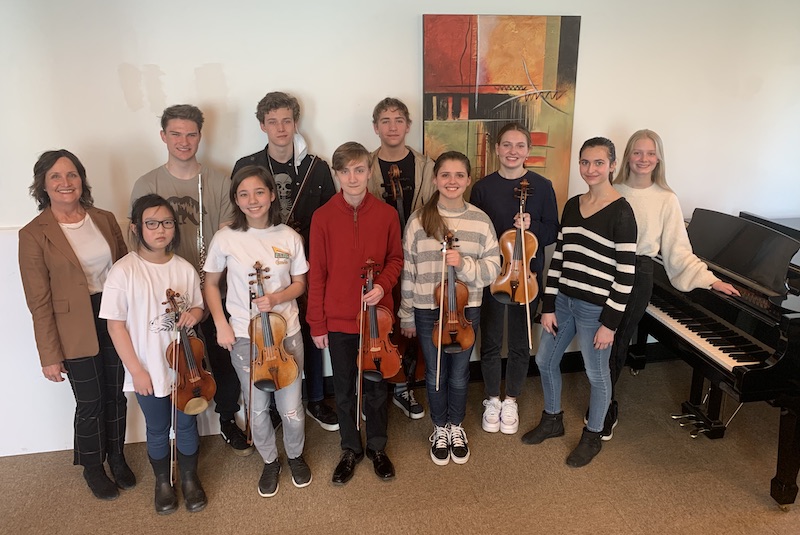 Shenae attended GMS as a student for six years, from the time she was 11 through high school, studying with Eugene Watanabe. She went on to earn her Bachelor of Music degree at the Juilliard School and her Master's Degree at Yale University. And then she came back -- and now she serves as the school's Conservatory Orchestra Coordinator.

"Our mission is not necessarily to produce the world's leading musicians - though this may be a happy and welcome consequence," she said. "Our goal is to mold our students into sensitive, collaborative and empathetic citizens of the world - our future leaders - through high quality, accessible music education. I feel this is what makes GMS special."

To that end, one of the school's current students, violinist Ezekiel Sokoloff, 17, has made headlines lately for success on the competition circuit, recently winning first place in the Ronald Sachs International Music Competition. He's also performed as a soloist several times with the Utah Symphony.

But equally impressive are the young violinist's service projects that have given back to GMS: volunteer-teaching at Project GRIT, and even going after instrument donations for that program - getting 30 violins donated and raising money to have the instruments set up and restored.

"There is a culture of service and humility that goes with this school," said Debbie Moench, a GMS founding board member and well-known Suzuki violin pedagogue. For example, in the Conservatory orchestra, the leadership is shared, with an active rotation system. A student may be be concertmaster one month, then last stand - moving all around. "Everyone learns how to sit next to the concertmaster, and how to be the concertmaster. This is the goal: to create a force. It's not just 'look at this one student.' The idea is to push everyone one up, to create a community."

Moench described the school as a wheel that keeps turning: young students begin, they develop their talents, they become the leaders and role models for the next generation. "You never get to a place where the wheel isn't moving. It's always fluid, you're always re-inventing," Moench said.

Likewise, our efforts to keep the gift of live music thriving require constant renewal. "Music never is just done; it just keeps giving," Moench said. "We are always creating it, it's never going to get to that place where we don't need input from each other and support from the community. We need everybody supporting each other."

November 24, 2022 at 01:56 AM · This is the type of program that has a mega-influence on the future of strings, but not only that! All of these young trained musical minds will be able to access areas of their brains in wonderful ways in their adult lives, whether or not they go into music as a profession. Kudos to you for this story, and to the Watanabes for bringing this to life! Wonderful!