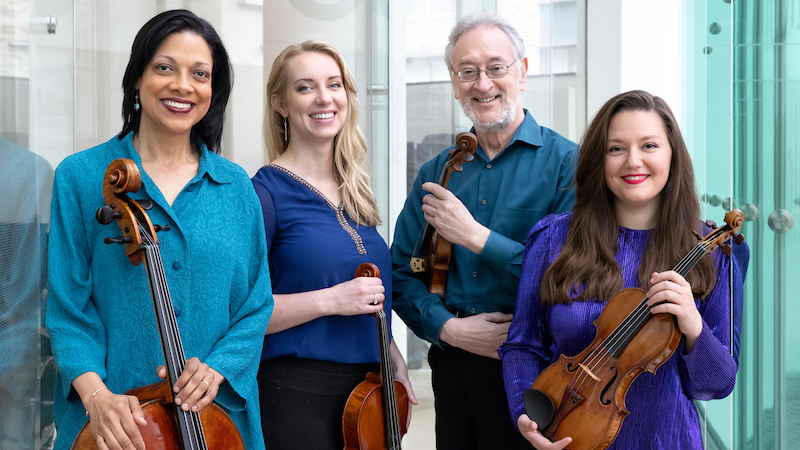 Carr, who earned both her bachelor's and master's degrees in music from The Juilliard School, is on the Pre-College faculty at the school, and with this appointment will join the Juilliard college faculty. She also serves on the faculties of the Manhattan School of Music and Bard College Conservatory. Third-place laureate in the 2008 Primrose International Viola Competition, Carr has also received awards from Chamber Music America, ProMusicis Foundation, and the Davidson Institute. She is also founding director of Project: Music Heals Us, a non-profit that brings free chamber music performances to elderly, disabled, rehabilitating, incarcerated, and homeless populations.

Founded in in 1946 and celebrating its 75th anniversary this season, the Juilliard String Quartet's other current members include violinists Areta Zhulla and Ronald Copes, and cellist Astrid Schween.

"After the loss of our beloved colleague and friend Roger Tapping, we are thrilled to be welcoming Molly Carr as the new violist of the Juilliard String Quartet," said Zhulla, Copes and Schween in a joint statement. "Molly brings to our work together fantastic collaborative energy, a deeply probing curiosity and a passion for sharing that has marked the members of the quartet through its history. We are eager to start this next chapter with her!"

Carr said that she has found inspiration in the Juilliard String Quartet for her entire musical life. "It is such an immense privilege to be invited to follow my late mentor and friend Roger Tapping in carrying on the much-revered, decades-long traditions of this historic quartet, and having the opportunity to delve into some of the greatest music in the world on a daily basis with colleagues and friends like Areta, Ron, and Astrid is truly a dream come true," Carr said. "I cannot wait to get started!"

Upcoming highlights for the Juilliard String Quartet include premieres next season in Tucson of two quartets by German composer Jörg Widmann; as well as concerts with Itzhak Perlman, Emanuel Ax, and Jean-Yves Thibaudet at Carnegie Hall, in Toronto and in Ann Arbor; and two tours in Europe.