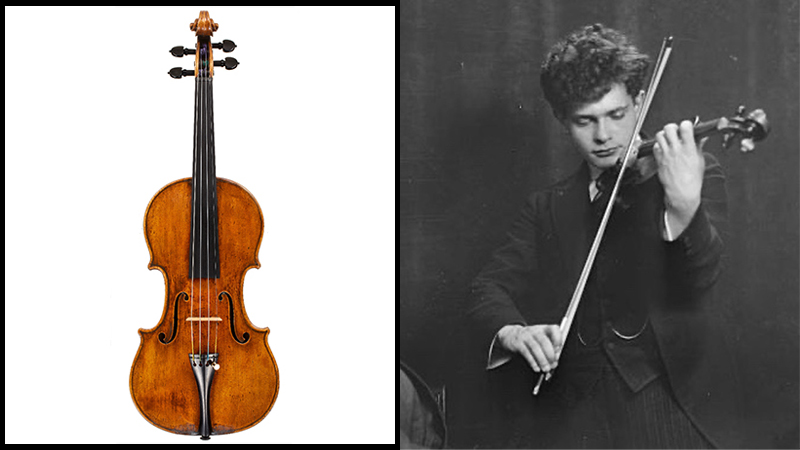 Left, the 1714 "da Vinci, ex-Seidel" Strad; right, the young Toscha Seidel.
The "Golden Period" Strad was used for almost 40 years by Russian-American violinist Toscha Seidel (1899-1962), who was once a classmate of Jascha Heifetz, Efrem Zimbalist, Mischa Elman and Nathan Milstein in the studio of Leopold Auer in St. Petersburg. In fact, in 1922 George Gershwin wrote a song about the Russian-Jewish virtuoso violinists called "Mischa, Jascha, Toscha, Sascha."

During the 1920s Seidel toured across the United States, Europe and Australia, then in the early 30s became a radio and studio performer, hosting the weekly radio show The Toscha Seidel Program and working as CBS’s musical director. While living in New York he met Albert Einstein and gave him violin lessons. The two performed the Bach Double at a fundraiser to benefit German-Jewish scientists imperiled by the Nazis.

Seidel moved to California in the mid 30s and played as a soloist and concertmaster for Paramount Studios. He was the uncredited violin soloist in "The Wizard of Oz" (1939). Seidel also worked with composer Erich Korngold and was friends with Charlie Chaplin, playing duets with him at his house. After World War II, Seidel taught at the Los Angeles Conservatory of Music.

BELOW: Seidel plays Korngold's "Much Ado About Nothing," Op. 11: III. Intermezzo. Garden Scene:

After Seidel's death, the "da Vinci" Strad was sold to Muriel Rubin (1917–2014), a violinist from Toronto who studied at the Eastman School of Music and later settled in Los Angeles. Rubin was an active studio musician and a longtime supporter of the Young Musician’s Foundation in LA.

In 1974, it was sold at auction at Sotheby’s. In 2007 it was acquired by Tokuji Munetsugu and became part of the Munetsugu Collection of Nagoya, Japan. In his retirement, Munetsugu devoted himself to philanthropic efforts centered around classical music. His non-profit organization, Yellow Angel, provides music instruments to schools in the Aichi prefecture. The Munetsugu Angel Violin Competition takes place every three years and awards the winner with the loan of a fine instrument. The Munetsugu Hall in Nagoya presents several hundred classical concerts per year, making it one of the largest venues for classical music in Japan.

According to Tarisio, this auction was the first time the violin was publicly offered for sale since 1974.

June 11, 2022 at 02:26 PM · Seidel's performance of the Korngold might be one of the most beautiful things I've ever heard. Thank you for sharing this lovely story and video clip, Laurie.

June 13, 2022 at 06:21 PM · I agree with Diana. Seidel’s performance is stunning: great pitch, consummate bow control and phrasing, and (mostly) tasteful slides. But it got me thinking about the evolution of vibrato. Seidel’s is quite fast by today’s standards (that may have been what Auer taught, if you take Jascha and Toscha as very small sample size). Today the esthetic is much slower and richer, with more variety, and I was wondering when that evolution started. My first guess is the young Itzhak Perlman, but I’d be very curious to hear what others have to say about this. Btw, the same evolution happened in the world of opera. Just compare Caruso with Domingo or Pavarotti.

June 14, 2022 at 12:55 PM · First, I must say that I love reading about all the history. I find all the details fascinating. Thank you Laurie for that. The Korngold was beyond magnificent. Oh my. It just lifted me to another place and brought tears to my eyes. Thank you. More please.