June 17, 2022, 1:45 PM · A 1758 Nicolas Gagliano violin that was reported stolen in a Chicago home burglary in May has been returned to violinist MingHuan Xu, along with two other instruments that had been taken from her home: a 1994 Oliver Radke violin and Xu’s son’s half-size cello.

The 1758 Nicolas Gagliano violin, worth several hundred thousands dollars, was on loan to her by a private sponsor.

"My heart-felt gratitude for the Chicago Police Department for recovering our instruments," Xu wrote on her Facebook page. "A special thank to Detective Peralta, for his amazing work and dedication that brought our instruments back home undamaged. We are so so happy, relieved and grateful!" 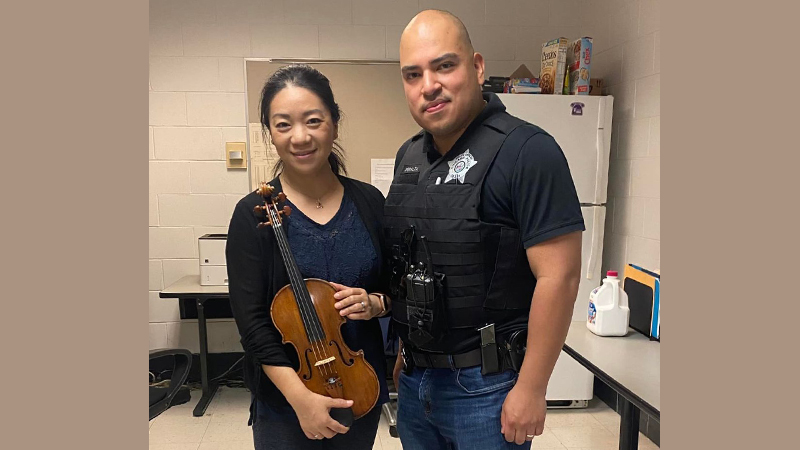 Xu was scheduled to perform at the Walla Walla Chamber Music Festival in Washington earlier this week, but after receiving a call from Chicago police Tuesday, Xu immediately canceled the performance to fly home and identify the instruments.

"They were mine, I could tell right away, within seconds," Xu said. "But most importantly, they were all in good condition." While at the station, she said she played a little impromptu concert for the detectives.

Xu has performed on the Gagliano for 20 years; "It's my voice, that instrument," she said.

Xu will perform for the first time on her newly recovered violin on June 28 at Chicago's St. James Cathedral, for its Rush Hour Concerts series.

As for Xu and her family, after the events of the last month, they have installed a state-of-the-art security system in their home.

Your profile picture shows idle instruments not in protective cases. If anything happens to damage one of them, think of this exchange and tell yourself that you should have taken better care of them!

June 20, 2022 at 03:12 AM · Victor, are you well versed with all of the factors of the case (home burglarized, alarm did not sound, etc.)? Did you decide to write an extremely unhelpful and negative comment, that the owner of the violin is unlikely to read, to make yourself feel better?

v.com is a positive place 99% of the time. Try being more positive. The player and the owner both got their violin back. Her kids got their instruments back. No need to shame a victim.