June 21, 2022, 11:54 AM · In an effort to promote the coverage of live violin performance, Violinist.com each week presents links to reviews of notable concerts and recitals around the world. 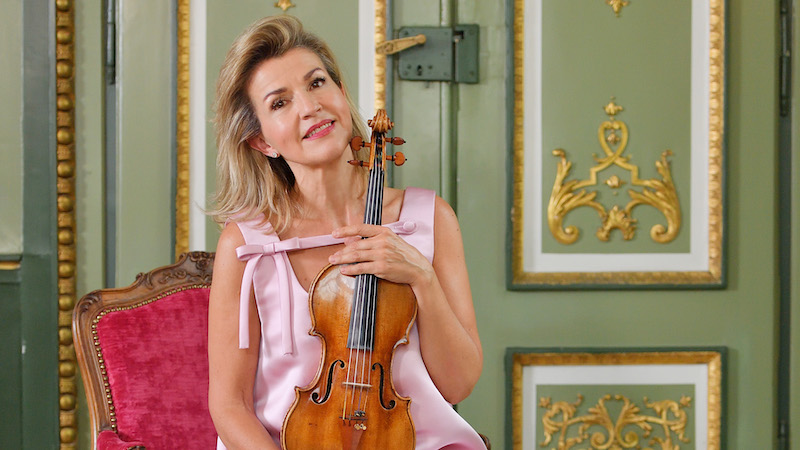 Anne-Sophie Mutter performed Beethoven’s Violin Concerto with the Chicago Symphony Orchestra, with conductor Lina Gonzalez-Granados stepping in for Riccardo Muti, who was COVID+.

Black Violin performed at The Ordway in St. Paul, Minnesota.

Lisa Batiashvili performed works by Saint-Saens and Chausson with the Chicago Symphony Orchestra.

It was a shock being email notified of our Chicago Symphony Orchestra Music Director, Riccardo Muti's, sudden diagnosis of Covid-19, a too close for comfort withdrawal from partnering on the Podium with celebrated Violinist, Anne Sophie Mutter, and in this perfect Violin Concerto gem of Ludwig van Beethoven ~ The Muti/Mutter collaboration was greatly looked forward to by many here in Chicago, and I know many faraway admirer's of Anne Sophie Mutter, travelled large distances to hear her on this might've been Last Riccardo Muti/Anne Sophie Mutter in LvB Violin Concerto with our Chicago Symphony Orchestra at Orchestra Hall whilst Maestro Muti is still Music Director ...

Unable to attend one's heart sank yet I was told the young Sir Georg Solti 2022 recipient of the Solti/CSO Apprentice Award for conducting, Lina Gonzalez-Granados, was doing a superb job of standing in for Music Director Muti!! It was revealed to me, a former Member of Sir Georg Solti's Chicago Symphony Orchestra, that young Conductor, Lina Gonzalez-Granados, was truly providing support for the ailing Maestro, and in Open Public Rehearsal the day prior on Wednesday, 15th of June, 2022, had enjoyed a smooth collaboration w/the CSO & all of those involved with Anne-Sophie Mutter going the extra mile to help young Lina G-G, feel welcomed & musically supported by the Beethoven sized CSO and very kind Violin Soloist, known for her flexibility and caring in crisis situations!

Oddly, a sad occurrence provided all full house Audience's the opportunity to acquaint themselves with Chicago Symphony Orchestra short notice adaptability & that of rare Anne-Sophie Mutter, in not completely ideal conditions yet highlighted the Award of the globally acclaimed late Music Director, Sir Georg Solti's, vision for future young Conductor's having opportunity to launch Conducting Careers in Top Tiered Major Orchestras! Having known Maestro Solti, quite well and truly friendly after returning to solo violin concertising, I am sure our beloved late Maestro, was smiling from ear to ear in Heaven looking down upon 'his Chicago Symphony Orchestra', who had introduced yours truly & Anne Sophie Mutter to each other decades prior in London's Royal Festival Hall, backstage, to become violin friends & at the time neither ASM nor myself adept in English or German, just saying nice things about Maestro Solti, who seemed pleased we were getting along so well!! {We updated our initial RFH meeting in Chicago, backstage January 22, '20, following a gloried All Beethoven Piano/Violin Sonata Recital which was a marvel beginning of Beethoven's 250th Birthday & which was being globally celebrated Until ...} At least I heard Anne-Sophie Mutter with her wondrous Pianist, Lambert Orkis, in Three LvB P/V works: the 'Spring' (5); 8th in G Major and 9th, 'Kreutzer' which was revelatory on Mutter's part with rare insights into undercurrent rarely heard hidden messages in the more explosive movements plus an inner calm which was in rather beautiful contrast to the fury contained in much of the Kreutzer Piano/Violin Sonata!! One's own musical idea's were stretched hearing some new discoveries by a deeply and seriously researching Beethoven profound Violinist who in no way veered off into strained efforts to 'project', aka, force LvB's innate fury contained in his famous Piano/Violin Sonata #9 on to an enraptured Orchestra Hall audience ...

Not intending to create a 'Review', if it reads like a review, and seems like a review, then it Is a Review of sorts from a Violinist blessed with great mentor's, Jascha Heifetz & Nathan Milstein, & both of whom created inroads into Beethoven's Masterworks for the Piano & Violin Chamber Duo ensemble collaboration in his middle period of string composition and with Beethoven's 'Brand' of Love ~

If interested, I may come back to penn a few more thoughts?!