July 6, 2022, 4:27 PM · In mid-June, about 75 young violinists from around the U.S. gathered at the Colburn School - in person - for several weeks of intense study at Sounding Point Academy, a pre-college program founded by Robert Lipsett and Fabiola Kim. 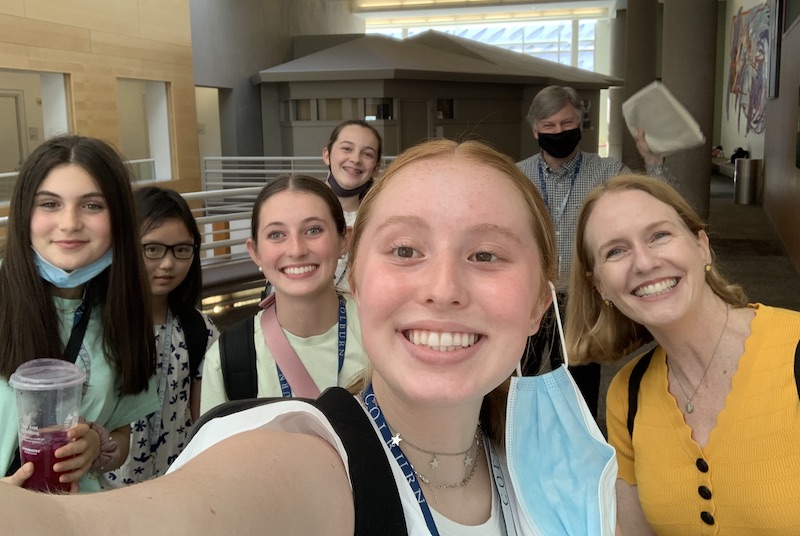 "It's been the perfect combination of hanging out and practicing for hours," was the consensus of a group of students from The Gifted Music School in Salt Lake City who had traveled from Utah to participate.

I dropped in toward the end of the program to catch a few master classes, including one given by a well-known teacher that I've been wanting to observe - Sounding Point faculty member Simon James. 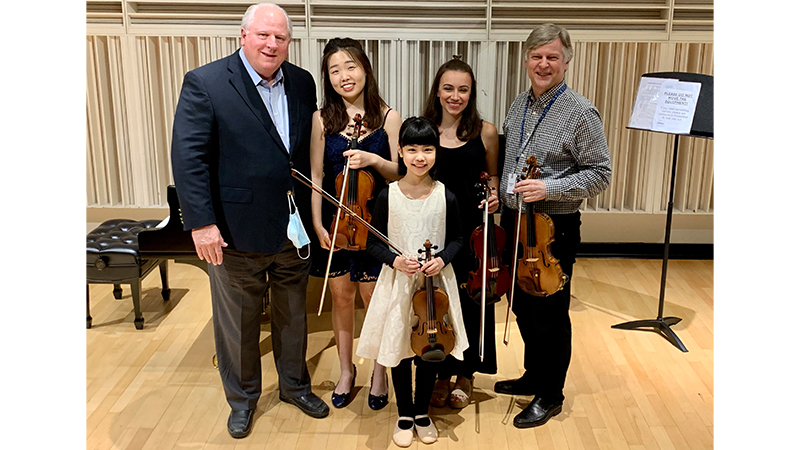 Based in Seattle, James teaches on faculty at the San Francisco Conservatory of Music and is well-known for his skill in training solid number of young violinists who have won top prizes in international competitions. He also brings varied experience as a player to his teaching, having been a member of the Seattle Symphony, the Melbourne Symphony Orchestra, and Lincoln Center’s Mostly Mozart Orchestra; a recording artist; having performed with pop music artists such as Pearl Jam, Elton John, Billy Joel, and A R Rahman; and having made classical recordings as a soloist.

In addition to his encouraging words and ideas for students, James shared a lot of interesting concepts that would be a revelation to any violinist.

The master class began with Jolie Rebelo, 22, of New York, who performed music by Clara Schumann (19th century pianist, wife of composer Robert Schumann and dear friend to Johannes Brahms): the first two of her Three Romances for Violin and Piano. 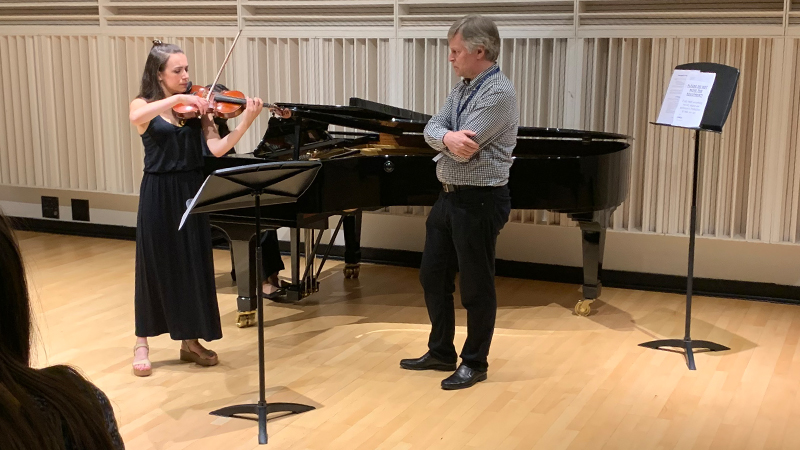 The first Romance is slow and contemplative; it also has five flats and is full of rhythmic pitfalls. The second Romance has more direction (and less flats - only two). At times it skips and trips along, with grace notes embedded in strange places. Rebelo negotiated these tricky elements quite well.

When Rebelo was finished, James asked if anyone in the room had played Clara Schumann's "Three Romances" before. When very few hands went up, he pointed out that this was the first time that most of us in the room had ever heard these works, and that this is something to note and to remember.

James noted that Clara wrote these Romances for the violinist Joseph Joachim, friend to both the Schumanns and to Brahms, and that this probably affected how it was written.

With so many flats, James recommended thinking in terms of intervals, rather than note names. He also recommended playing with healthy volume - "there's never been a time in history when someone said, 'Oh I wish that violinist would play more quietly!" he said.

James talked about viewing various markings in terms of where you have to start in order to make those things happen. For example, when you see "animato," it means you are at a slow point, as you'll be speeding up. When you see a crescendo, you are at a soft point, as you will be increasing the volume.

He also mentioned that the first Romance contains a reference to Robert Schumann's A minor Violin Sonata (I believe it's the rhythm and swoop in the animato, m. 31-36).

When it comes to phrasing, "singing is the single easiest way to figure out how a phrase should go." So try singing the music - sing in the shower, "I do it all the time!" he said. One discovers that singing relates to the breath, and it's worth noting that singers have to be careful of how they push the breath out. Opera singers are thinking about and controlling every single breath, in order to produce the right sound, pitch and volume.

James also helped Rebelo notice some details that a lot of people might not catch, such as a shift that she was making early, causing an unintentional but audible glissando between notes. Getting rid of these kinds of accidental noises makes for a cleaner musical message.

Next, Carine Suparman, 10, of Australia, played the third movement of Wieniawski's Concerto No. 2, displaying excellent agility with the fast and furious opening cadenza, as well as a great position and stable hand with double-stops. 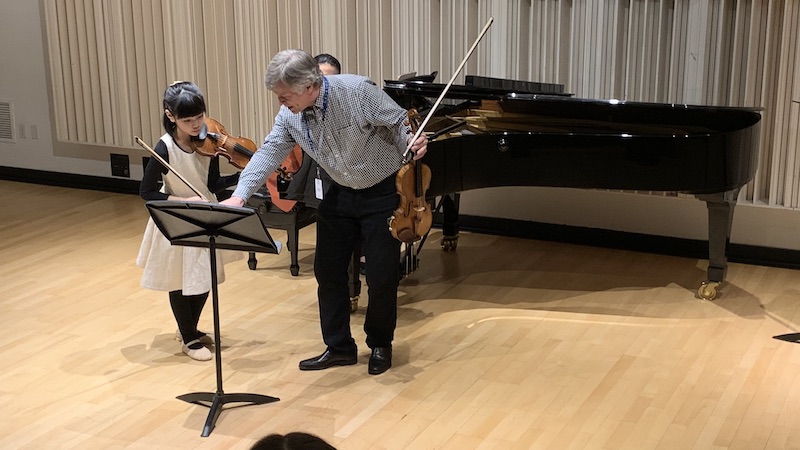 James noted that "there are a lot of interesting techniques to play in this piece." Indeed!

In the opening he suggested dropping two fingers at a time, like double stops, in a passage that toggles between two strings. Throughout the class, Suparman easily implemented his suggestions, prompting him to observe, "I think you could do anything I asked you to do!"

James noted that, while we hear Tchaikovsky, Mendelssohn, Mozart concerts played frequently in concert halls, "rarely do we hear Wieniawski Concerto No. 2 played with symphony orchestra."

The cadenza that begins the Wieniawski third movement begs for at least some rubato, or stretching and contracting of time. But perhaps not too much. About this, James had several suggestions. One was to listen to old recordings of this movement, such as Michael Rabin (who does some, but not a lot of rubato), because "listening to the old guys is how we figure out how we got where we are." In other words, we have some habits regarding how we do this rubato, and it makes sense to think about it before falling into the typical ruts that have been handed down over the years by tradition and repeat listening to recordings.

Once this movement starts revving up, "you don't want to play like Robbie the Robot," and take it all in strict, metronomic time. "Show me some accents within the running 16ths." It is worth noting that toward the middle of the first page, the accents change from off-beat (m. 50) to on-beat accents (m. 51-52). Details like that are worth some extra effort to bring out.

James also talked about projection, and the idea that "there is a line in the sand - it's the line between playing really big and playing nasty." Play big, but don't cross that line!

He also described a phenomenon that is common to violinists, when it comes to double stops - something this movement contains in abundance. He called the phenomenon "pitch dyslexia." It happens especially when playing thirds. If you think about it, when playing thirds with the first and third fingers, the "1" is the high note, and the "3" is the low note; so when it's out-of-tune, "people make exactly the wrong correction," he said. For example, if the high note sounds too low, they raise the 3rd finger - but that raises the low note! Then there's another issue when playing thirds with the 2nd and 4th finger, which is that the 2 is typically the longest finger on a human hand, and the 4 is the shortest. He suggested practicing 2-4 thirds without using the 4, because "when the 2nd finger isn't good, it doesn't matter what the 4 does." In other words, the 2, that long finger, must be in tune, then the 4 can fall in place.

When tuning thirds, one can also listen for overtones (or "Tartini" tones) - the note created when the sound waves from these two notes mesh together. James said that for a major third, the overtone is an octave below the low note. For a minor third, the overtone is a fifth below the high note. And as an aside, he pointed out that the bass line for the Pachelbel canon is based on an overtone series. Who knew? (I didn't!)

When it comes to playing octave double stops, the low note carries the day. He pointed out that, when you are stopped at a traffic light and the car next to you has music booming, what do you hear? The low notes. So when playing an octave double stop, bring out the lower note.

Next, Kate Lee, 17, of Irvine played the Vitali "Chaconne." 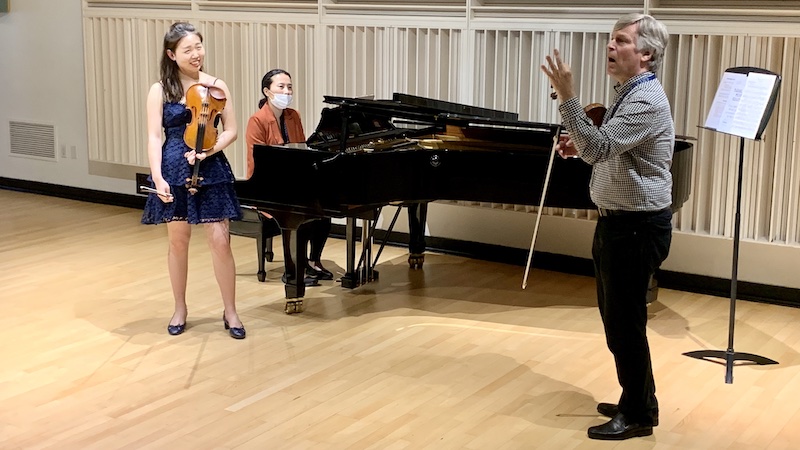 James complimented her stage manner, the way she showed everything and even smiled at the end of the piece. It's important to remember that as musicians, "we are in sales and marketing - we are all actors and actresses," he said. It's not enough to just play the notes, we have to "sell" our performance.

While the "Chaconne" is attributed to the Italian composer Tomaso Antonio Vitali (1663-1745), this commonly played version, arranged in 1867 by the violinist Ferdinand David, "is not Baroque music," James said with a smile. It has a Romantic-period feel and "it's very virtuosic."

He praised the way Lee handled the universally-dreaded leap into high-position octave double-stops, a passage in the latter part of the piece. It's a place where some students tend to get shy and back off, just in case they don't land the giant shift. By contrast, Lee performed it boldly and with commitment. "'Going for it' helps - fear never helped anything in this piece," he said.

In the opening of the Chaconne, "there is something very bold and noble - and the 'bold' that he was going for here is something more than volume," he said. It has to do with the energy, the clicks at the bow changes, and the phrasing. "A flatline in the hospital is a bad thing," he said, the phrasing brings it all to life.

It's also important to decide when to shift and when not to shift. Sometimes shifts are a necessary evil, but when they are optional, or when they can be placed differently, one can ask, "Is this shift adding to my phrase, or subtracting?"

He also made note of the somewhat unusual marking "sospirando" ("sighing") on the second page. When a marking is novel, it's worth paying a little extra attention to it. Here, it's all about changing the sound, making it more transparent, and attending to the gesture indicated by the marking.

He also dramatized the tendency to stop vibrating before a shift: "Ladies and gentlemen, I'm about to shift. I'll get back to the vibrato when I'm done!" He recommending vibrating all the way up to the shift so there is no interruption.

What a treat it was, not only to see James teach, but also to watch the commitment of the students who played in this class, as well as the commitment of those in the audience - it was clear that every student was in attendance. This master class was among three at Sounding Point Academy - the others were by Fabiola Kim and Danielle Belen. Unfortunately I was not able to attend Fabiola's, but I will be writing about Danielle's excellent class in the next week, so watch for more on Violinist.com!