That is one of the first things violinist Danielle Belen told an audience of about 75 young violinists from all around the U.S. who were gathered for her master class at Sounding Point Academy in June at the Colburn School in Los Angeles. 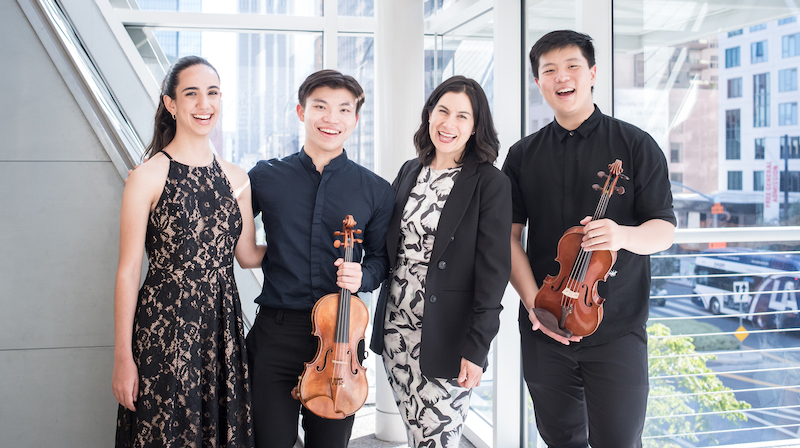 Belen, who was the winner of the 2008 Sphinx Competition, has been associate professor and full-time violin faculty at the University of Michigan School of Music, Theatre & Dance in Ann Arbor since 2014. She also runs Center Stage Strings, a summer program she founded in 2010, when she was just 25.

Clearly she meant those words - she gave each student a very individualized kind of attention, with a mix of unvarnished truth, prescriptions for improvement, and sincere positivity about what they were already doing well. The result was noticeable progress - encouraging for all to watch!

Poyu Lee, a 21-year-old violinist from Taiwan, began the class by playing the first movement of Erich Korngold's Violin Concerto in D major.

"I don't think music gets any more beautiful than this concerto," Belen said after his performance. She pointed out that Korngold was a composer of film music, and "you really hear that flavor in his violin concerto." She praised Lee's stage presence and command over his own ideas, then she talked with him about sound production in performance. "You could have more gliding in your playing - your sound has a little more dirt than I like."

She described her own green-room routine, right before playing a concert as a soloist.

"I kick everyone out," she said, "and then I go really big with my playing - I just smash the violin!" she said (not meaning that literally, of course!). In other words, she overplays. "What I'm doing is that I'm carving a slot in the violin," she said. Then once she's on stage, "I just glide through that slot." 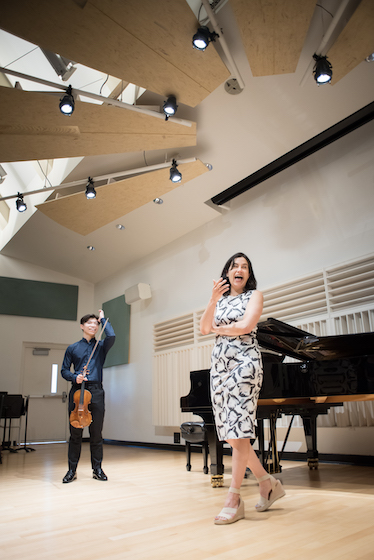 She asked him to play it with a more shimmery sound - glistening, shining. He did so - backing off until it was gliding, and it sounded more clear and directed.

She also had some advice for producing a big, loose vibrato up high on the violin. She said that for that kind of vibrato, it's not always helpful to hold the hand as you do when playing fast, with the fingers hovering and ready to drop.

Instead, "when it comes to getting that juicy vibrato, all bets are off, in terms of hand frame," she said. She asked him to try putting his fourth finger up in a curl, while vibrating with the third finger. "By getting the fourth finger out of the way, you can wag your finger quite a bit more loosely."

Poyu tried it, and sure enough, he produced a beautiful, rich vibrato. "It works for the second finger, too," she said, "and it really works for the first finger."

Back to the backstage warm-up, after overplaying and carving out that slot for playing, she recommended completely backing off and practicing with non-vibrato.

"Take out the rhythm and turn it into a series of tones," she said. Give all the notes the same rhythmic value, and play it all softly. "Make it perfect - match every open string. And no squeezing," she said. "It's so calming. And it's really the only way you can get your ear in order."

Use the opportunity to take away any unintentional slides and to make every note sound as clear as an open string.

"If you give 10 grains of sand for each note, every note we play, we come typically in about three grains. Listen for one grain," she said.

Poyu played part of the Korngold this way, with the pianist playing along, but with no rhythms, very softly, with keen attention to intonation. Belen noted his bravery in doing this work in front of 75 violinists, as it is very revealing.

"When you are practicing in your little warm-up room, take a second - this is holy time," she said.

As the next player was getting ready, Colburn violin professor Robert Lipsett talked about the history of the Korngold concerto. Lipsett is co-founder of Sounding Point Academy and once Belen's teacher (she also was his teaching assistant for five years). Lipsett said that the commonly-held idea that Korngold used movie music in his violin concerto is actually backwards. He actually wrote the first two movements of the violin concerto in the 1930s, before his film-scoring days. "So it's exactly the opposite of what you hear," Lipsett said. He did indeed write the third movement while in Hollywood - then Heifetz made it more difficult. At the time he wrote it, Korngold's concerto wasn't popular, but at this point it has worked its way into the mainstream repertoire.

Belen praised her playing as clean and organized, and then she smiled and said, "How about a little attitude?"

Of course, this statement made me think about the word "attitude" which has come to mean primarily "a way of thinking about someone or something." But originally, the word more accurately meant "body posture." I still remember a sentence in a very old children's book: "Raggedy Ann's arms and legs were twisted in the strangest attitudes!"

"You have a sound that draws me in, but if you could physically draw me in, it would be just amazing," Belen said.

She noted that Sophie was playing mostly in what Belen described as "A position," with eyes looking at the left hand. 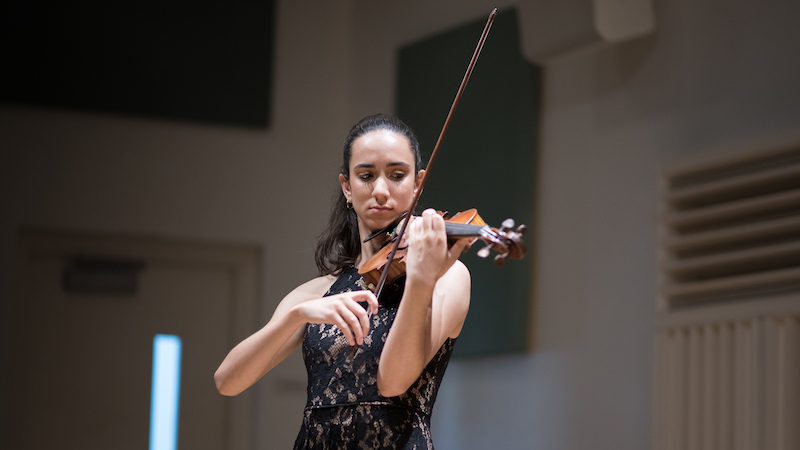 She had her try playing in "B position" - looking somewhere other than the violin, although "don't make eye contact with a specific person," she said. Belen said that when she is playing in B position, "I'm looking at my sound." (Vague as that sounds, I understood what she meant - a kind of listening that seems to involve even the eyes.)

She had her try walking around the room, and experimenting with how much bow to use. "It's so magical to see someone use the whole bow when they don't have to," Belen said. Our movements can contribute to that feeling of "attitude."

Belen also noted that there was just one thing missing from Sophie's passagework: vibrato. "That would open up your palette tremendously," Belen said. "It's going to be hard to vibrate in passages, but it's worth it."

For practice, she had her dial back a passage to 80 percent speed, then try to vibrate on every single note. They did this without the bow because as Belen said, "using the bow it would sound frantic and psychotic."

Once she had loosened up with vibrato on every note, Belen told her to simply play the notes that feel the most melodic longer, and with vibrato. "Make it super-obvious - let's be a little outrageous," she said. Make big shapes, with a big high point.

"In the end, you won't do vibrato on every note," she said, but having it on the special melodic notes will elevate the musicality of a passage.

The last student to play was Harry Wang, 17, from Sydney, Australia, who performed the first movement of the Tchaikovsky Violin Concerto with great control and fast fingers. He had been playing the piece for just six months and Belen noted that "you have a grand way of playing."

She wanted him to try to get a deeper richness from his sound, so she had him play a melodic passage from the movement, slowly. Standing behind his scroll and peeking around at all his fingers, she noted that "We don't have equal sound, in terms of fingers." In his case, "your third finger is the model for how you should vibrate all your other fingers." 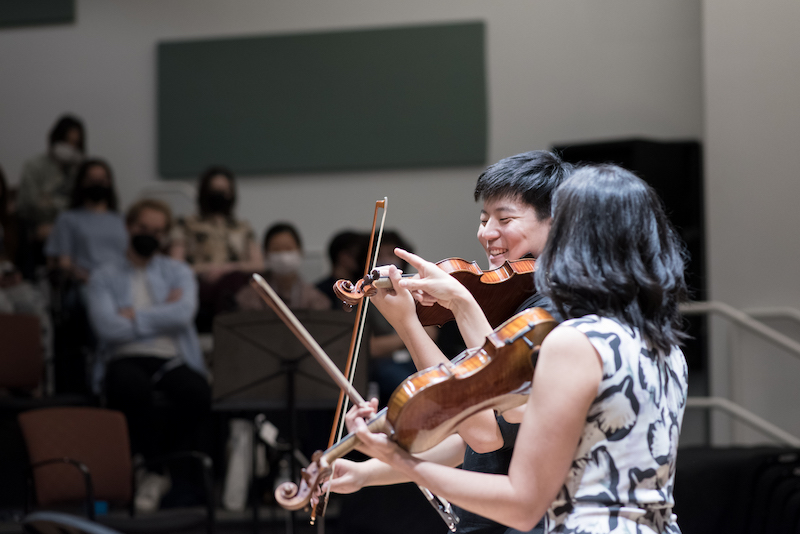 Vibrato can involve the arm, finger, wrist - "great vibratos have a little bit of everything," she said.

What is vibrato? It's an oscillation to a pitch below the desired pitch, and it helps us project our sound.

"If you are vibrating evenly, then each of those two pitches is important," Belen said. "The lower pitch - that is the secret sauce."

For example, the sound of an ambulance is designed to be extremely loud, and that is why it oscillates between two pitches.

How does one do continuous vibrato in a melodic passage, even when changing fingers?

Belen had a great exercise to help with that: While vibrating continuously on the second finger, practice lifting the first finger, then slowly placing it back down again. Work on placing the finger slowly, to help with control.

For the opening of the Tchaikovsky, make a full and voluptuous sound with a "sizzle vibrato" on the low A. To get a big vibrato on the F sharp, way up on the G string, put the thumb forward.

As the master class ended, the mood felt triumphant. Belen had succeeded in helping each student work on a few key techniques, suggesting ideas that were helpful to all, and putting smiles on faces in the process. Well done!