September 29, 2022, 2:43 PM · Welcome to "For the Record," Violinist.com's weekly roundup of new releases of recordings by violinists, violists, cellists and other classical musicians. We hope it helps you keep track of your favorite artists, as well as find some new ones to add to your listening! 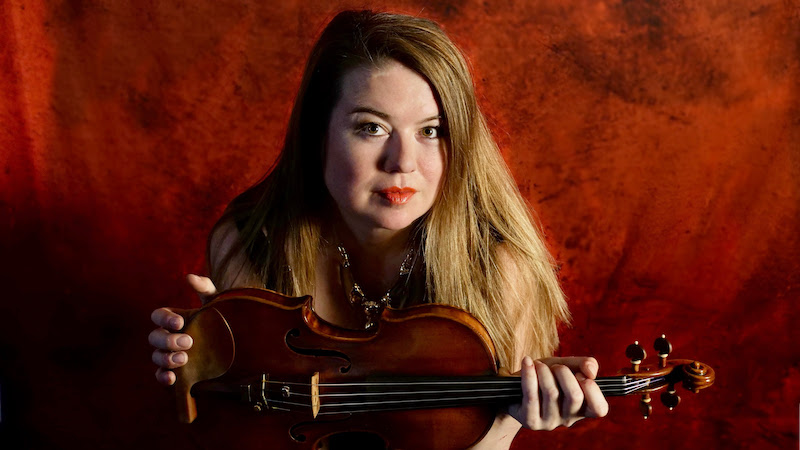 Lara St John's latest album is part of her larger ongoing mission to fight for women's rights and historically marginalized groups. The album features 17 original solo violin compositions written by 12 composers, including Laurie Anderson, Valerie Coleman, Gabriela Lena Frank, Jessica Meyer, Jessie Montgomery, Milica Paranosic and more, including five world premiere recordings. "As someone who is only too well aware of how the cards are stacked against women in music, I have spent a lot of time listening to works by those who have historically – and more recently – broken through the composition brotherhood," St John said. "During the pandemic, I decided to record an album of solo violin works written by these remarkable women. Some were composed for me, some I arranged, and others I found to be impressive works of new violinistic ideas." BELOW: Lara St John plays "Confronting the Sky" by Jessica Meyer:

Violinist Daniel Hope and pianist Alexey Botvinov present an album of works by Ukrainian composer Valentin Silvestrov. The album was made in collaboration with the 84-year-old composer himself, and includes the world premiere of his Pastorales 2020 (related to the 'Pastoral' Symphony, commissioned for Beethoven's 250th anniversary year in 2020). The pandemic, then the Russian attack intervened. Botvinov was forced to leave the country with his family, and they quickly pivoted to presenting benefit concerts in Germany and recording the Music for Ukraine EP. Silvestrov himself was able to escape the country after Kyiv was bombed, taking refuge in Berlin and finally allowing Hope and Botvinov’s album of his music to come to fruition. BELOW: Hope and Botvinov play Silvestrov's "Melodies of the Moments," Cycle III: I. Lullaby.

Born in 1885, Alban Berg was one of the most significant composers of the Second Viennese School, whose output proved tremendously influential in the development of music in the twentieth century. Berg's Violin Concerto, from 1935, was commissioned by the American violinist Louis Krasner, but was inspired by the premature death (from polio) of Manon Gropius, the daughter of Alma Mahler and the architect and Bauhaus founder Walter Gropius, hence the subtitle "to the memory of an angel." It proved to be one of the composer’s final works as Berg died later that year. BELOW: in a different performance, James Ehnes plays an excerpt from the Berg Violin Concerto.

This album of world-premiere recordings celebrates composer Pierre Jalbert's long relationship with the Escher Quartet, as well as paying tribute to flutist Carol Wincenc during her 50th anniversary season. BELOW: "Waveform" - the 2nd movement of Pierre Jalbert's Quartet No. 4:

Internationally renowned for giving the pipa, a lute-like instrument with a history of over 2,000 years in China, a new role in both traditional and contemporary music, pipa virtuoso Wu Man’s newest recording brings together the musical traditions of India and China. The recording is a collaboration with the world-renowned sarod grand master Amjad Ali Khan and features his sons, Amaan Ali Bangash and Ayaan Ali Bangash, and percussionist Shane Shanahan. "I was very pleased to hear the result of these instruments, traditions, and histories blending together," Wu Man said. "To me, it highlights all of the things that our cultures share. It is the sound of unity, the sound of hope."

September 30, 2022 at 08:09 AM · Good to see that the Coleridge-Taylor violin concerto is gaining ground with audiences. Congratulation to Elena Urioste and Chineke!