Making the Transition from Violin to Viola, with Dr. LeeAnn Morgan

January 6, 2023, 1:33 PM · Sometimes when a violinist switches to viola, he or she simply has to dive straight into the deep end, without any guidance.

That was the case with Dr. LeeAnn Morgan, who now teaches both viola and violin as part of Brigham Young University's string faculty and is Director of Chamber Music at The Gifted Music School in Salt Lake City. She started playing viola during her senior year in college.

"At first, I wasn’t given any instruction - I was just out there on my own," she said. "But, within a few weeks, I was able to take private lessons from Dr. David Dalton which helped immensely." She thought she would never be able to learn to read alto clef quickly enough, but after three months of intense immersion, it became her second language.

The truth of the matter is that the two instruments are not interchangeable, with their different clefs, different sizes and different approaches to tone production. Transitioning from the violin to the viola is serious business, and it's something that LeeAnn takes seriously for her students.

I watched her teach a "Violin to Viola" lesson last year at the Gifted Music School in Salt Lake City, and I was inspired by her passion for both instruments and her attention to the special details that allow for a smooth and effective transition from violin to viola.

On the day I was observing, LeeAnn was teaching a student named Tessa, who started playing viola in the summer of 2021, using one of five violas donated to the Gifted School by a student's family. I was watching her lesson just six months after she had started, and to me it seemed she had progressed quite far in a short amount of time. 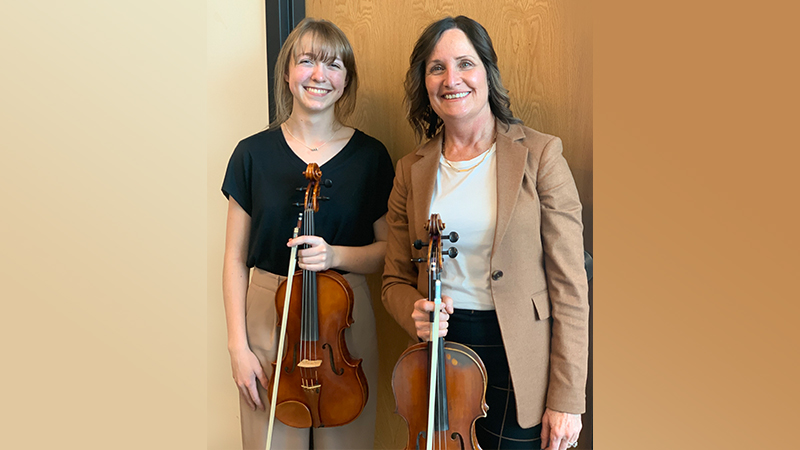 Violin to Viola: Tessa and her teacher, Dr. LeeAnn Morgan.

Tessa summed up a number of the challenges: "I think playing the viola is harder than violin," she said. "It's a bigger instrument, and you have to use more muscle. You also have to reach farther, the spaces are different."

LeeAnn shared some of the books and repertoire that she was using - which would work for a transitioning violinist who is already in Suzuki Book 4 or beyond. First she recommended "Viola for Violinists - the Conversion Kit," a method book by violist Dwight Pounds. The book is hard to find, but I actually got in touch with Dwight, who said that you can purchase the book by e-mailing him. (Click here to e-mail Dwight Pounds.)

LeeAnn also suggested learning Mazas etudes on the viola (just transpose them), and she recommended From Violin to Viola: A Transitional Method by Harvey Whistler.

For the lesson, LeeAnn started by having Tessa play a C major acceleration scale - a "clean copy" with no vibrato. After that, she played a scale, adding the vibrato.

Then they worked on the J.C. Bach Viola Concerto (by Henri Casadesus). They talked about sound production and musical ideas.

"Try to grab out the sound," LeeAnn said. "Don't be afraid to pull more through."

After playing a certain passage, LeeAnn asked, "Did you reach the top dynamic you wanted?" The answer was "no," so she suggested using sequences to build dynamics. Fairly often she was asking her to dig in a little more, and to warm up the sound with more vibrato.

Next they worked on the Prelude from Bach Suite No. 1. LeeAnn recommended the Peters Edition of the Suites, transcribed for viola, as being the most comprehensive edition. She said she has four editions.

LeeAnn asked an interesting question, one that had never occurred to me: How many open strings are in the very first measure?

For that very first three-string slur, she suggested making it one continuous movement, with no bumps. One way to practice that first measure is with double stops.

For practicing string crossings that are smooth arcs, LeeAnn also suggested an exercise that derives from Ysaÿe: with one continuous bow, play an open C, then 1-2-4, double-stopping with the open G, then continue 1-2-(4-openD)-1-2-(4-openA) - and then back down, doing those double-stops with all the 4's.

"We've been told for so many years to have different arm levels for different strings," LeeAnn said. It can feel very different to find all the angles in-between, but that also opens new possibilities.

When it comes to the left hand in the Prelude, "These are just broken chords that Bach has written, so tune it as a chord."

As I watched LeeAnn working with Tessa, I saw first-hand the subtle but significant difference in the skills that are involved in playing viola vs. violin: the larger size of the viola equates not only to different hand and finger spacing for the left hand but also different bow angles on the right hand. It requires a different bow technique to get into the string and produce the best sound. It's heavier and requires more energy to hold. And then there's the whole business of learning the alto clef...

But clearly, Tessa was up to the challenge and happy to be playing the viola.

"I realized that I really liked the C string," Tessa said. "I went in to buy a viola bow, and the people there warned me - once you start viola, you realize you can't go back! The richness of the viola is pretty awesome."

Both anecdotal data, I'm aware of two high school students who switched from violin to viola because they didn't like the E string on the violin.

It wouldn't surprise me if this is a predominant reason why violinists switch. The viola can have such a nice voice to it.

I once asked my luthier how much does one have to spend to get a violin with a nice sounding E string. He responded about $150K, and I think that he was half-way serious.

January 7, 2023 at 03:27 AM · I totally agree. Those violinists who prefer lower sounds end up being much happier playing viola, and it's certainly a common reason to switch. I personally play both regularly (as well as piano) and struggle to choose between the two. I absolutely love the viola's deep sounding C string, but love the brilliance of the violin's E string as well. Switching back and forth isn't hard for me because I do it a lot, but there are certainly a number of subtle differences between playing the two and I focus a lot on my bow arm going between the two. I started viola when I was 12, but used a violin strung as a viola till I was nearly 15 due to my small size. I never had specialized viola lessons because 1. I didn't want to give up either my violin or piano studies, 2. I didn't want to leave my violin teacher who I loved dearly, and my personal circumstances would only allow me to study with a viola teacher that isn't the best fit for me if I switched focus to viola, and 3. I'm really drawn to romantic-era violin solo literature. I have played viola a lot in youth ensembles because of the chronic viola shortage, but I currently play violin in the one community orchestra I'm in because 1. I love violin and 2. there was a recent influx of new violists for some reason so the viola section is big enough. I'm still looking for musical opportunities outside orchestra though. I seriously considered majoring in music, and unless I chose to major in piano performance, my plan was to start as a violin performance major and switch focus to viola only if I felt it was the right thing for me. However, my significant lack of interest in teaching turned me off a musical career so I'm now an amateur instead.

January 7, 2023 at 04:08 PM · I have been told that I am better on the Viola than the Violin. Part of that is because I have a real problem gauging the tiny intervals on the second half of the E string. The feel of the bow arm is a fundamental difference. The Violin bowing is constant balancing act while bowing on the Viola is like persuading a recalcitrant mule, I never hit bottom.

My start to Viola was in college. At a summer student orchestra session I was suddenly placed as principal Viola and the first piece on list was Firebird. I learned the clef quickly.

January 8, 2023 at 12:27 AM · I took up viola nine years ago when I retired. Despite superficial similarities, they are really different instruments. I love them both, but I am much more popular (and possibly more successful in some ways) as a violist, and it gives me opportunities for chamber music that I would not otherwise have. At this point, I do almost exclusively viola, partly because that is where the opportunity is. I am in a string quartet as a violist, I have done some trios as a violist (with a clarinetist and pianist), and I do viola in community orchestra. However, there is a certain amount of orchestral music, mostly baroque and high classical, where I would rather play violin, e.g., Handel's Messiah. One thing I will say is that, for an amateur, it is probably easier to be a good violist than a good violinist.

January 8, 2023 at 01:57 AM · Hardest thing for me is to slow down and widen my vibrato to something that sounds more cello-like.

January 8, 2023 at 02:13 AM · I enjoy playing viola as I think it enhances my skills as a violinist. Everything is just a bit bigger, heavier and more difficult on viola.

January 8, 2023 at 02:48 AM · Yeah, for me I surprisingly didn't have to change my vibrato much going from violin to viola, although I do think about widening it a bit and I sometimes tell myself to play more on the pads of my fingers for a wider vibrato (my violin teacher told me that) and it helps. For me bowing technique differences are the big deal.

January 10, 2023 at 07:51 PM · I call myself The Accidental Violist. One day a friend who had joined a local orchestra shoved a viola into my hands and said, "Learn to play this; we need more violists." That also marked my introduction to orchestral playing. (This friend is one of those forces of nature who just makes things happen as required.) Many orchestras - especially amateur orchestras - are desperate for violists. If you have a viola and a pulse, you're in.

I do still play violin (well, bluegrass fiddle mostly), and can switch back and forth if I allow 10 or 15 minutes for my fingers to recalibrate to the different note spacing. However, it didn't take long for me to realize that the viola is a different instrument. It has its own sound. As others have pointed out, you have to work harder to dig sound out of the strings. Fortunately my fingers are long enough that I can handle a 16 1/2-inch viola, although I'm constantly working my 4th finger to keep it stretchable.

I found it easier in the long run to learn the alto clef as a totally different thing, rather than try to apply tricks that let you continue to think in treble clef. It's now more common for me to suffer treble clef dyslexia than the other way around - but a session playing music that switches between both clefs soon takes care of that.

I love handing my viola to violinists and watching the look on their faces when they draw the bow across the C string. Mmmmmm... dark chocolate!