Violinist Giuseppe Gibboni: A Victory for the Italian Violin School

January 12, 2023, 1:15 PM · When violinist Giuseppe Gibboni won first prize the Paganini International Violin Competition in 2021, he was the first Italian to do so in 24 years. And he won decisively, also capturing the audience choice prize and special prize for the best interpretations of Niccolò Paganini's Capriccios and Violin Concerto.

BELOW: Gibboni's performance of Paganini's Violin Concerto in D major from the 56th Paganini Competition in 2021:

Gibboni was born in Italy in 2001, to a family of musicians - his mother Geraldina Letteriello is a pianist, his father Daniele Gibboni is a violinist, and his sisters also play the violin.

When Gibboni started played both violin and cello at age three, his father was his first teacher. The cello soon fell by the wayside and he mostly focused on the violin. "It was an easy decision...violin is much better! I'm joking of course," Gibboni said. "More likely it was to imitate my father or my sisters, who already played the violin."

When he was 14, he started studying with Salvatore Accardo at the Stauffer Academy in Cremona. Accardo actually was the first Italian to win the Paganini Competition, back in 1958. (Other Italian violinists who have won are Massimo Quarta in 1991 and Giovanni Angeleri in 1997.)

"I studied with Mr. Accardo for many years, at both the Stauffer Academy in Cremona and the Chigiana Academy in Siena," Gibboni said. "The fact that I was his student, and like him won the Paganini competition, indicates his great violin school!"

For Gibboni, a victory at the historically significant Paganini Competition - by him and by other Italian violinists - also represents a victory for the Italian violin school. After all, Paganini was one of the greatest violin virtuosos of all time - and he was Italian. However since its inception in 1954, only four Italians have taken first prize. But Italy - home not only to Paganini but also to the great violin makers Antonio Stradivarius and Bartolomeo Giuseppe "del Gesù" Guarneri - can and should remain a bastion of excellence, when it comes to the violin.

Accardo was just one of Gibboni's teachers - he also studied for five years with Pavel Berman at the Accademia Perosi in Biella, and he now studies with Pierre Amoyal at the Mozarteum University in Salzburg. Leading up to his win at the Paganini competition, Gibboni had already had won a string of competitions - first prize at the Andrea Postacchini Violin Competition, as well as major prizes at the Kogan, Enescu and Valsesia International Competitions.

Just last October Gibboni had the opportunity to play on Paganini's famous "Cannone" Guarneri del Gesù, with which he performed Paganini's Concerto No. 1 with the Carlo Felice Opera Orchestra at the Teatro Carlo Felice in Genoa. He described his feeling about playing the instrument as "one of the strongest emotions I’ve ever experienced." 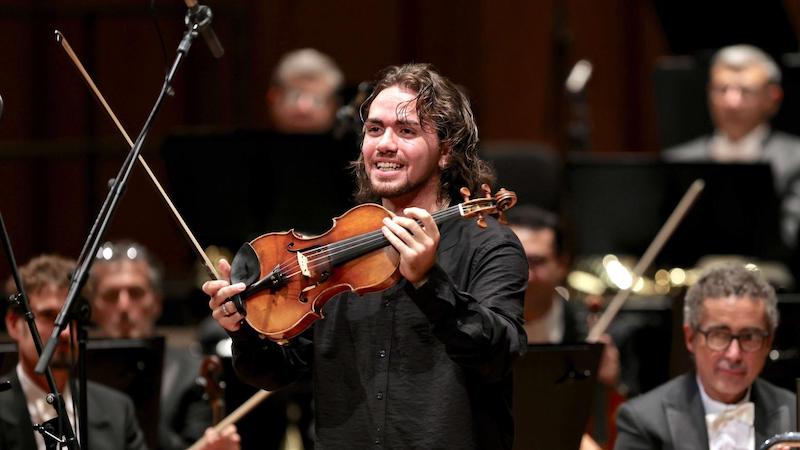 "I am sure that every time you play a violin you leave a small part of yourself that will help make the instrument great, so it is always a great responsibility," Gibboni said. "I had the honor of playing two of Paganini’s violins - the most famous one, the Guarneri del Gesù 'il Cannone,' and also the Vuillaume 'Sivori.' Both are incredible instruments. It was exciting to see to marks that Paganini made on the instruments that give us an idea of his physical way of playing."

Recently Gibboni was granted the use of the 1699 "Auer/Benvenuti" Stradivari, on loan from a German foundation.

With all of his studies with famous teachers, competition wins and playing on the world's finest violins, Gibboni still counts his father among his most important teachers.

"I think a father is a teacher forever," Gibboni said. "I never stopped studying with him ... he simply was humble and intelligent enough to understand when it was time for me to study with other musicians. I think the key was to distinguish the two roles, father and teacher. He was very good at this."

Gibboni has said that he would also like to see educational institutions - in Italy and beyond - offering musical training for children, starting from an early age, so that others could have the opportunity to study from a young age, as he did.

"I believe that music has great educational power, and I say this from personal experience," he said. "It teaches discipline and respect - but in my opinion, the most important thing it teaches is how to listen. Today we need it more than ever."

January 13, 2023 at 01:05 PM · thanks Laurie, great story, and congrats to the winner. Francesca Dega came to my mind, she is a really great soloist and Italian, I thought she too had won that competition in earlier years, but it turns out she was "only" a "finalist".

January 13, 2023 at 05:01 PM · Very often the artists who were "only" a finalist in a major competition go on to have the great careers! She is certainly an artist worth following, here is our Interview with Francesca Dega from 2018.

January 14, 2023 at 08:58 PM · Sometimes "only finalists" turn out to be the real ones to watch (not to take away from Gibboni, as I didn't follow this competition)

January 15, 2023 at 11:22 PM · It's nice to see Gibboni extending the Accardo legacy. Thank you for posting the interview, Laurie.