V.com weekend vote: Has your local orchestra ever had a female conductor? 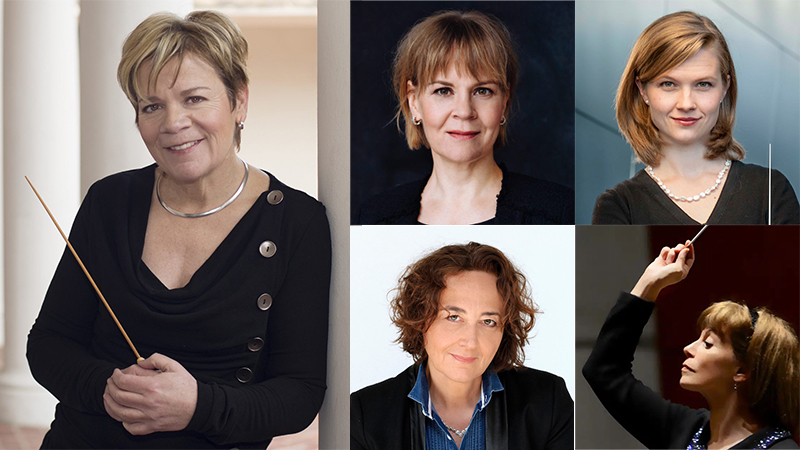 Unfortunately, it has not been for their achievements and gains in recent years, but because of the movie "Tár," in which the actress Cate Blanchett plays a female conductor who has professional success but is a sexual abuser.

Marin Alsop, arguably the most successful female conductor of our day, took issue with the movie:

"To have an opportunity to portray a woman in that role and to make her an abuser — for me that was heartbreaking," Alsop said in Variety magazine. "I think all women and all feminists should be bothered by that kind of depiction because it’s not really about women conductors, is it? It’s about women as leaders in our society. People ask, ‘Can we trust them? Can they function in that role?’ It’s the same questions whether it’s about a CEO or an NBA coach or the head of a police department."

I have not seen the movie myself, but I enjoyed a review by Ariane Todes, former editor of The Strad, in her blog Elbow Music. Aside from some great points she makes about the movie, Ariane also makes this very important point:

"Most egregiously of all, one of Tár’s diatribes in the film is about how women conductors of the previous generation – name checking Alsop and Nathalie Stutzmann – had it easy and stood on the shoulders of Nadia Boulanger. This is so patently false that it’s either supposed to convey Tár’s own skewed thinking or to justify the premise of the gender swap. Either way, it misrepresents a business that is only in this generation coming to terms with equality, and still has a long way to go."

Indeed. Is the conductor of your local orchestra male, or female? Let's just do a poll!

I will say that in recent years, I have seen many more women conductors on the podium, both as a player and as an audience member. The Los Angeles Philharmonic has brought in many female conductors as guests, and also as part of Music Director Gustavo Dudamel's Dudamel Fellows. After all, growing the roster of female conductors requires that female conductors have access to elite-level training and experience.

So I wanted to ask you what the situation looks like in your community. Does your local orchestra have a female music director, or assistant director on staff? Have they brought in female guest conductors? Please also share your thoughts on the female conductors you have seen on the podium, whether as a member of the orchestra or as an audience member.

January 15, 2023 at 06:03 PM · We’re lucky to have Barbara Day Turner, founder and conductor of the San Jose Chamber Orchestra. She also champions work by modern and female composers. We have so many local orchestras that I can’t really say which is my “local orchestra.”

January 15, 2023 at 06:33 PM · The Knoxville Symphony has a female guest conductor this week, Lidiya Yankovskaya.

January 15, 2023 at 07:44 PM · From my own research so far, I’m not sure about the local scene. No ladies on the full-time roster. Among the guest conductors, there may already have been some I haven’t yet heard about.

As a student, majoring in performance, I had the experience of playing multiple times under the baton of the late Grammy winner Margaret Hillis - while I was in the CSO’s training school, the Civic Orchestra of Chicago. Hillis was really good to work with, and my colleagues felt so, too. She had a way of connecting with us and drawing the music out of us. The scores I remember her leading us through: Schubert 9, Brahms 2, Verdi Requiem, Honegger’s King David. Working with her remains one of the highlights of my musical education.

January 15, 2023 at 10:53 PM · Over the years, both the Yale Philharmonia and the New Haven Symphony Orchestra have occasionally had women guest conductors at concerts I attended, though I do not recall their names. Nor do I remember the names of their men guest conductors.

Regarding the movie "Tar," I just read an extended review of it in the Jan 19, 2023 edition of the New York Review of Books. I see maybe one movie every few years, and read even fewer reviews of them. I could only laugh as I read the description of the twisted personality of character Lydia Tar. I read a few more novels than I watch movies, and twisted characters, however diverse, are standard literary fare.

I didn't see conductor Marin Alsop's critique in Variety Magazine, quoted above, but I did come across her message in the Jan 9 Chicago Sun Times, which included these lines:

“There are so many men — actual, documented men — this film could have been based on but, instead, it puts a woman in the role but gives her all the attributes of those men. That feels anti-woman. To assume that women will either behave identically to men or become hysterical, crazy, insane is to perpetuate something we’ve already seen on film so many times before.”

My reaction is to notice that, apparently, identity politics obliterates the concept of people being individuals, each to be regarded as a unique personality. No, now everyone is of a type and represents a group. Ironically this mentality seems common among people who claim to be fighting against prejudice. I first noticed it decades ago as a young radical but always questioned it and ultimately it seems to have replaced the formerly economic analysis defining the left. No doubt the liberation movements of the 20th century were good and necessary, but they now seem to be crystalizing into permanent and inherently divisive "differences" that were originally to be bridged into equality and judging each person as an individual.

I first noticed it in the 1980s with so-called "race" --it seemed to me to be pretty racist to assign everybody a racial identity and make it central to how they are regarded. Gay marriage was pretty fringe a generation ago, and though I accept it along with probably most of American society, fear of being accused of "hate" has paralyzed many people and institutions from stopping before reaching the extreme edges of the gender ideology. I'm old enough to remember when facts were objective things and not the product of how one chooses to "identify," to the point of confusing children and facilitating irreversible "transitioning" harm to their bodies, many of whom already regret it soon after finally reaching the age of majority.

Luckily as a common laborer I don't have as much to fear for honestly expressing my thoughts as do people I know in academia and management who fear being canceled if they dissent from dominant ideologies that were pretty fringe not many years ago.

The biggest irony to me is that rejecting the concept that every individual represents some larger group identity, and deserves different considerations accordingly, is often portrayed as a "dog-whistle" of hateful politics, when really it seemed to me the goal of eliminating prejudice and regarding each person on their individual merits. It never would dawn on me to think that the movie Tar --or even a real person like the Tar character-- somehow tells us anything about Ms. Alsop's (or anyone else's) character.

January 15, 2023 at 10:55 PM · Yes. For a University Opera, Music theater, and one concert set with a section player from S.F. Opera orchestra. From the wish list;--Alondra de la Parra

January 16, 2023 at 12:13 AM · Oops. What would be worse -- for our regional orchestra to have never had a female conductor, or for me to answer the survey assuming that they hadn't?

So, I wish I could change my answer!

Victoria Ellen Bond was the conductor of the Roanoke Symphony Orchestra from 1986 to 1995. I had to look that up, though, because I didn't move to the area until 1995 and David Stewart Wiley has been the conductor there since 1996. RSO also has a female CM -- Akemi Takayama, who initially moved to the area to become second violinist in the Audubon Quartet.

I also once saw the Virginia Symphony with its longtime female conductor, the amazing JoAnn Falletta. I saw them in Colonial Williamsburg on July 4th! What a great show. Falletta was originally a guitarist!

The description of the movie reminds me why I don't watch very many movies.

January 16, 2023 at 09:54 AM · The Sacramento Philharmonic, and its predecessor the Sacramento Symphony, have never had a female music director. (And it will not have one in the foreseeable future because the position was eliminated entirely in 2015.) But the Sac Phil does have female guest conductors fairly regularly, including two this season: Lidiya Yankovskaya for the season opener and Margaret Batjer as guest conductor/concertmaster for a Baroque program.

Does it matter? To some, I guess it does.

As a musician and music lover, the most important thing is: Can the leader get the most from the members of the orchestra? Can they do that without negative behavior?

Edit. Yes our community orchestra has had two women conductors. The only narcissist was a man.

I have also has several women bosses. No issues!

January 16, 2023 at 08:00 PM · I don't think my local community orchestra ever had a lady conducto, but I have played under lady conductors from my childhood onwards. In my uni the sexes were segregated into different colleges, and I once played in the Newnham Orchestra as a guest cymballist. I wasn't the best cymballist ever, and earned a public lecture from the conductor on which beats in her conducting were the 1st, 2nd & 3rd, etc. (I wouldn't have minded being able to play like the Zimbalist!).

January 16, 2023 at 08:35 PM · Laura Jackson has been Music Director of the Reno Philharmonic for 10-12 or more years. The concertmaster is also a woman. Jackson has commissioned new pieces by composers female and male.

January 17, 2023 at 07:29 PM · I greatly enjoyed Tania Miller's appearances as assistant conductor of the Vancouver Symphony Orchestra in the early 2000s. She went on to become music director of the Victoria Symphony in 2003, the youngest woman to lead a major Canadian orchestra. She still appears with many orchestras in Canada and around the world.