After Banff 2022: Interview with Adrian Steele of the Isidore Quartet

September 15, 2022, 5:20 AM · On September 4 the Isidore String Quartet took first prize at the Banff International String Quartet Competition with their performance of Beethoven's Quartet in A minor Op.132.

The competition among the three finalists was fierce. Opus13, whose performance of Brahms's Quartet Op.51 No.1 in the second round had been the Competition's outstanding performance so far, with a wonderful depth of field, vivid dramatic intent and a palette of surreal colors, played an Op.130 (with the Grosse Fuge as the finale) that was human and vulnerable. The Balourdet Quartet came next; tipped as early favorites, they made their case with an Op.131 that was strong and romantic in size and weight. 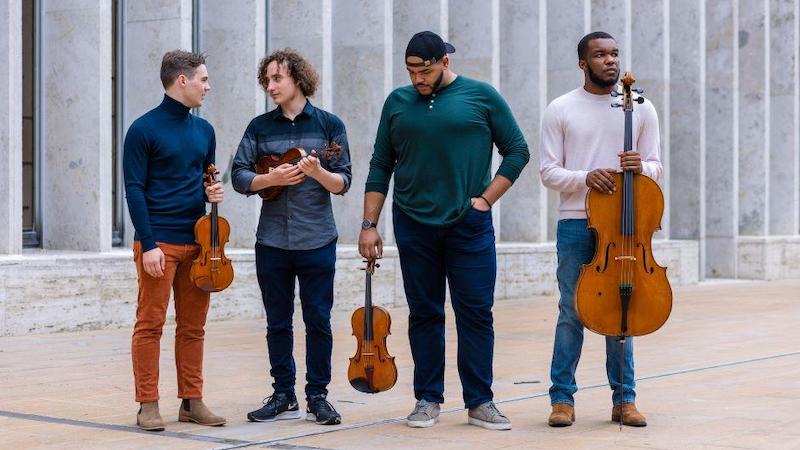 The Isidores had begun the Competition with a performance of Billy Childs' Second Quartet, inspired by Janacek’s Second String Quartet and tied to terrible events in the composer's life, that caused one of the jurors to exclaim as he was walking through the foyer, "It's a masterpiece!" The Isidore's performance of Op.132 was sculpted out of Beethoven's rarefied late quartet materials, at times with a focus and command beyond their years – their oldest member is 23 - and the sweeping coherence and blazing virtuosity of their narrative had the audience leaping to their feet at the end.

The members of the quartet – rotating violinists Adrian Steele and Phoenix Avalon, violist Devin Moore, and cellist Joshua McClendon – began studies as an ensemble in 2019 at the Juilliard School. The four reconvened post covid as a quartet at the Kneisel Hall Chamber Music Festival in the summer of 2021 under the tutelage of Joel Krosnick.

I spoke to Adrian Steele, who played first violin in the Beethoven, a week after the Quartet's win at Banff.

Question: What was the process of working with Mr. Krosnick on Op.132?

Adrian Steele: It was a long series of coachings. Each movement requires, as customary with the late quartets, an incredible depth of experience. And the way that Beethoven manipulates harmonies and material is never-ending. I remember our coaching on the second movement – which has three notes that Beethoven makes go on for nine minutes – and the character that you can bring out from those different manipulations. It was mind-blowing to hear Mr. Krosnick's insights and fascinating to learn how we could use an understanding of what Beethoven is doing to create an interpretation that is engaging.

Adrian Steele: One may be that Beethoven always has a very good idea of what he is doing. For example, if you look at the obnoxiously hard cello solo in the coda of the last movement, it's something that only Beethoven would have written – he understood what it meant for the cellist to be up there in the violin octaves, what emotional impact it would have, and what it would mean for the narrative of the piece. Remember, it's the last movement, you're coming out of the Heiliger Dankgesang and what I think the four of us would describe as the almost insanely drunk fourth movement with its cadenza for the violin, and then you have this really turbulent fifth and final movement.

I remember talking with Mr. Krosnick when we were working on this movement. He pointed out that in the coda there are maybe eight times that Beethoven could have just ended it. There's something exultant about the way he decides it needs to happen this way.

In fact, there's something obsessive about the whole quartet and his use of three- and four-note motifs – aside of course from the third movement which I would describe as a pinnacle of beauty on the planet. The fourth and fifth movements are obsessive. and dark, at times. And in the end, after Beethoven brings us to the ultimate kind of obsessiveness with that cello solo, he quickly decides that it's not worth it with the ending. It's quite a way to end the piece and quite a narrative to have to build. It always gets me. It's funny, a bit like the ending of Op. 135.

Question: How influential has Mr. Krosnick been in your development?

Adrian Steele: There's something special about being in a room with him and being inspired in the way that only he can. When we reconvened last summer after the COVID pandemic at Kneisel Hall, which is run by my teacher Laurie Smukler, we were assigned to play Bartók One and Mr. Krosnick was assigned to be our teacher. Studying Bartók with him was an adventure. He has an unlimited amount of ideas, of inspiration, and a unique way of communicating – not only in the way he hears the music but in the way he helps whoever he is coaching to find their own voice within the music. The energy he brings into the room is an energy we try to recreate when we're playing together because it invites whoever is listening into a completely different world.

I remember when he introduced me to the idea of a minor key vibrato in the second movement of Bartók One with its almost Schubertian extensions, it opened up a whole wave of possibilities in the way that I thought about the music and the way I interacted with it.

Question: Who else did the Quartet work with?.

Adrian Steele: It's an insane list of people who have helped us. Just this summer we worked with the whole faculty at the Ravinia Steans Institute. We worked with the cellist of the Orion quartet Tim Eddy, with Miriam Fried and her husband Paul Biss, and with Don Weilerstein. I can't keep listing them all because it was a huge faculty. It was an inspiring place to be. We also worked with Laurie Smukler this past fall and with Roger Tapping before he passed away. It was an immense pleasure in a very bittersweet way to work with Mr. Tapping. It was life-changing for all of us because of his dedication to music and his unmatched happiness. It keeps inspiring us now. We think about him a lot. We worked on Haydn and Brahms with him; it was inspiring and at times amusing. And listening to him play his viola in our coachings was incredible.

Question: Do you think that you and your family and friends and are ready for the changes ahead for you with all of this work and residency and touring?

Adrian Steele: I'm not sure if I'm ready, honestly. It's been less than a week already and things are probably still settling a little bit. My parents are proud of what we've accomplished and I owe them an endless amount of gratitude for all the hard work they put in supporting me and coming to my concerts. I did not always sound great when I was a kid. There were a lot of times when I was screeching around the violin!

Adrian Steele: Banff was a different experience from a lot of competitions I've been in. Barry Shiffman and everyone worked hard to make sure it was more of a festival atmosphere. And the audience was unique in their dedication to the quartets.

Question: What do you think about the format?

Adrian Steele: The format of four rounds before the final cut down to three finalists made it possible for all the quartets to play almost all of the repertoire they had prepared, of different styles and different eras. It wasn't like a violin competition where they hear Bach, Paganini and maybe another two or three pieces in the first round – and then cut 30 people. Here they created a much more even playing field for the quartets and the audience had a chance to connect with the groups by listening to them multiple times. They built relationships and they were supportive of all the groups. We had a great time at Banff. It was stressful of course but within the confines of a competition it was unlike anything that I've experienced.

Question: Tell me about your performance of the Childs.

Adrian Steele: Part of our mission and goal is to treat each piece as if it were a masterwork. That was always one of the Juilliard Quartet's great mottos when they were creating level playing fields for all different styles of music, playing Carter and Beethoven on the same program and recognizing them as pieces that were deserving of equal respect. That's what we try to do as well.

The Childs is an incredible work. We had a lot of fun working on it especially since Devin had actually met with Billy down in LA; having that connection meant a lot to us. It's a hard quartet written in a way that is a little difficult for us to get around our instruments, but we had an incredible amount of fun and were really inspired working on it.

Question: What draws you to chamber music?

Adrian Steele: What's beautiful about chamber music is that you have people who are incredibly dedicated to creating their narrative, their story and working to make that one. It's unlike any other form of music in that way. It's just an incredibly beautiful experience.