October 16, 2022, 3:15 PM · An 18-member string chamber orchestra comprised of some of the most accomplished young Black and Latin diaspora musicians currently working in the United States, the Sphinx Virtuosi is "the flagship performing entity of the Sphinx Organization." On Thursday, their performance in Carnegie Hall’s Isaac Stern Auditorium left no question that the Sphinx Virtuosi is one of the most important ensembles performing on the world’s stages. Titled "Songs for Our Times", the program was a celebration of Black and Latinx contributions to classical and concert music from the 19th century to present day and included many firsts: of the six works performed, five received either New York, Carnegie Hall, or world premieres. 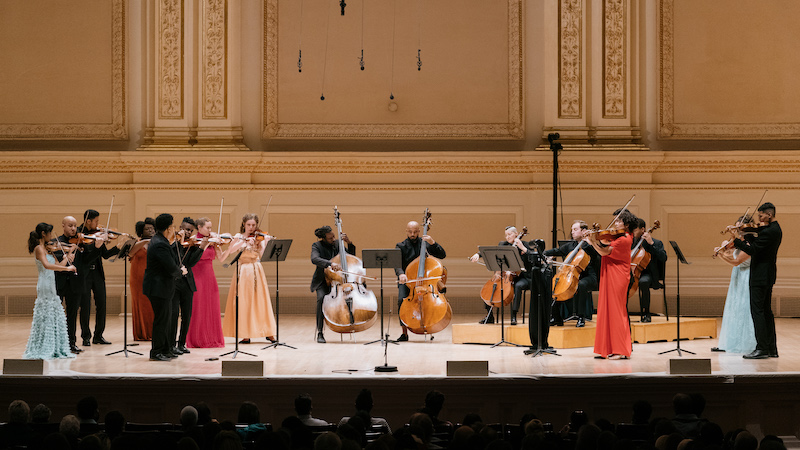 The concert started with Heitor Villa-Lobos’ "Bachianas brasileiras No. 9," and the level of committed music-making to come was evident before the first notes sounded, as ensemble members raised their bows simultaneously. The soaring, spacious lines of the first movement were played impeccably, with principal violist Celia Hatton’s solo wafting through the hall like a voice traveling across the Amazonian landscape.

Sumptuousness was perfectly matched with a sophisticated take on the polyrhythmic fugue: the ensemble tackled its chromaticism and complexity with excitement and ease. While there is a tendency for string players to "punch out" syncopated and knotty rhythms, the Sphinx Virtuosi maintained elegance and purity of sound while displaying the movement’s rhythmic integrity.

Valerie Coleman’s two-movement "Tracing Visions" is masterfully orchestrated and permeated with emotion. One of two works on the program co-commissioned by Carnegie Hall, the Sphinx Organization and the New World Symphony, "Tracing Visions" was written to remind us of our shared humanity through both loss and celebration. 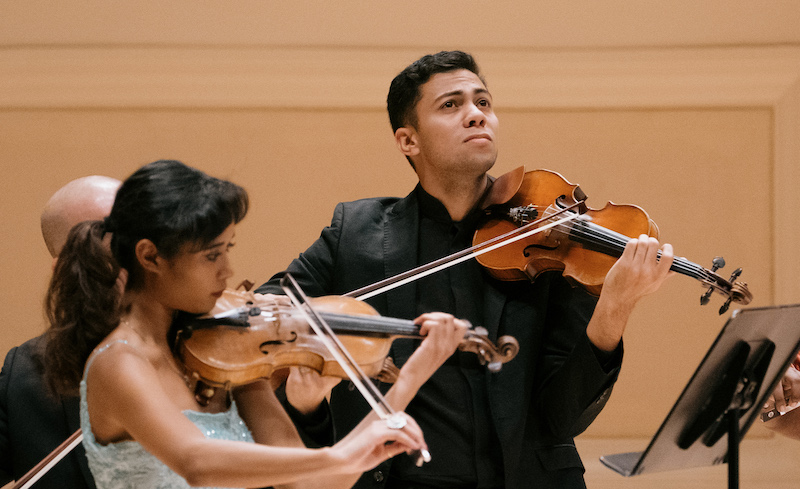 The first movement, titled "Till" (in reference to parents who have lost children due to wanton violence) and the second, a celebration of the Sphinx Organization titled "Amandla!" (which means "power" in Zulu), were equally handled by the Virtuosi: feelings ranging from fragility to rage were conveyed in the first movement, while the second movement was filled with melodies and motives played with lightness and Morse code-like precision.

Violinist and 2021 Sphinx Competition First Prize winner violinist Amaryn Olmeda was featured in a double Carnegie Hall debut, both hers and the stage’s premiere of Carlos Simon’s "Between Worlds." Olmeda is an accomplished young soloist who I definitely look forward to hearing again: her commanding stage presence, infallible technique, and interpretive ability already rival that of international concert stage veterans. 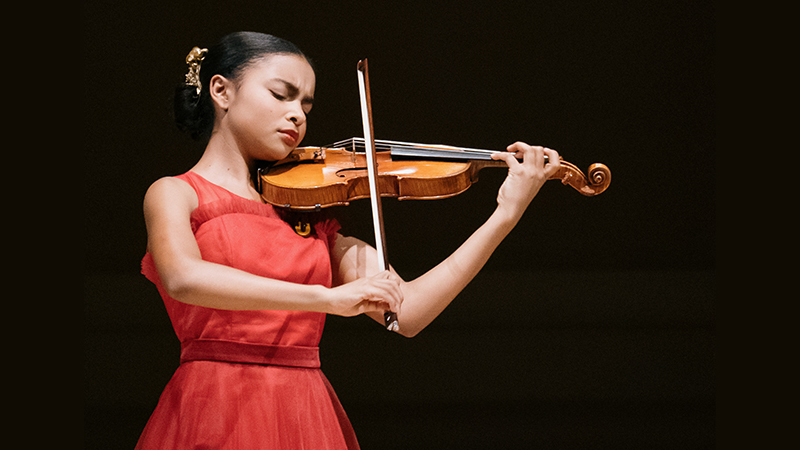 Inspired by the work of self-taught visual artist Bill Traylor (1853-1949), a man who was eyewitness to "slavery, the Civil War, Emancipation Proclamation, Reconstruction, Jim Crow segregation and the Great Migration", "Between Worlds" was written in 2019 for the Irving M. Klein International String Competition and is quickly becoming a staple of the modern concert repertoire. Olmeda’s performance had a profoundly mystical quality, capturing a full range of emotions throughout the plaintive G-minor opening and the fiendishly virtuosic chromatic section built on tritones ("the Devil’s interval") which, from her capable hands and searing intellect, brought images of the spirit world.

The tremendous audience response suggested that Olmeda is more than destined for a long and fruitful career. Additionally, Simon’s "Between Worlds," in the way that it describes one man's emotional and spiritual landscape, deserves its rightful place alongside Ernest Bloch’s "Baal Shem" and Aram Khachaturian’s lesser-known yet equally compelling "Sonata-Monologue for Solo Violin."

Bloch also came to mind while hearing Jessie Montgomery’s "Divided" for solo cello and orchestra (the second joint commission on the program). As the former’s "Schelomo: Hebraic Rhapsody for Cello and Orchestra" is a musical description of King Solomon’s life featuring the cello as the Biblical character, Montgomery’s "Divided" was written in response to tremendous global uncertainty. Cellist Tommy Mesa was the perfect protagonist, asking the questions of existence with a burnished tone throughout while beautifully accompanied by the orchestra on an odyssey ending in an abrupt yet fitting climax.

Seriousness gave way to levity as bassist Xavier Foley and violinist Hannah White came to the stage for the world premiere of Foley’s "An Ode to Our Times." Violin and bass were equals in this piece: Foley’s nimble technique powerful sound highlighted the work’s inherent joy and spontaneity, and White’s effortlessness made her the perfect partner on this witty journey filled with call-and-response imitation and improvisatory surprise.

The concert ended with a string orchestra arrangement of the "Finale" of Ludwig van Beethoven’s Sonata for Violin and Piano No. 9 in A Major, Op. 47. Known as the "Kreutzer" Sonata, this work was originally dedicated to George Bridgetower, a virtuoso violinist of African descent living in Europe at the time (the dedication was changed due to some controversy). Venezuelan violinist Ruben Rengel’s orchestration for string orchestra was superb, and the movement’s kinetic energy flowed seamlessly across the ensemble.

As we continue regaining a sense of normalcy and return to gathering in person, this event was a joyous and meaningful celebration of what it means to be alive during these times and a true testament to artistic excellence. 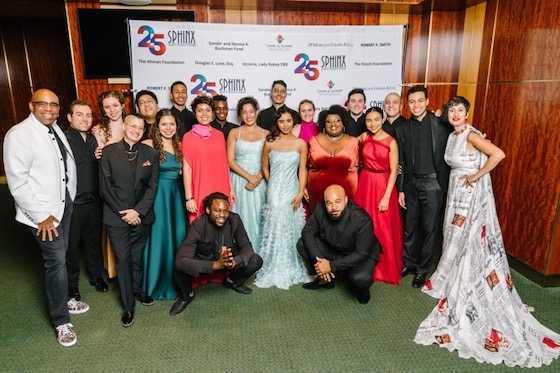 This concert is scheduled for later broadcast on WQXR’s "Carnegie Hall Live" series, and the Sphinx Virtuosi continues the fall portion of their 2022/2023 tour with concerts in Buffalo, Cleveland, Philadelphia, and a South American debut in Sao Paulo, Brazil.

October 18, 2022 at 06:00 PM · I don't know why, but I never see any programs with Villa-Lobos on them - All the Bachianas are fantastic works, and he wrote so much more beyond them too. I just attended The Colorado Symphony this weekend, and they played Jessie Montgomery's "Strum", which was a great piece that seems inspired by Ravel's string quartet. I'll have to dig into her compositions more. I'm always slow on the uptake with contemporary classical composers.