September 18, 2022, 3:48 PM · "With openness, take the next step – ALWAYS!" These words were spontaneously written by Jorja Fleezanis in a copy of Paulo Coelho’s The Pilgrimage that she gave me after a lesson at the International Festival-Institute at Round Top in 1999. It must be said that I have taken both that advice and everything written in Mr. Coelho’s book to heart over these years, and I remain profoundly grateful to have met such a phenomenal musician and human being at what was a truly critical time in my development. 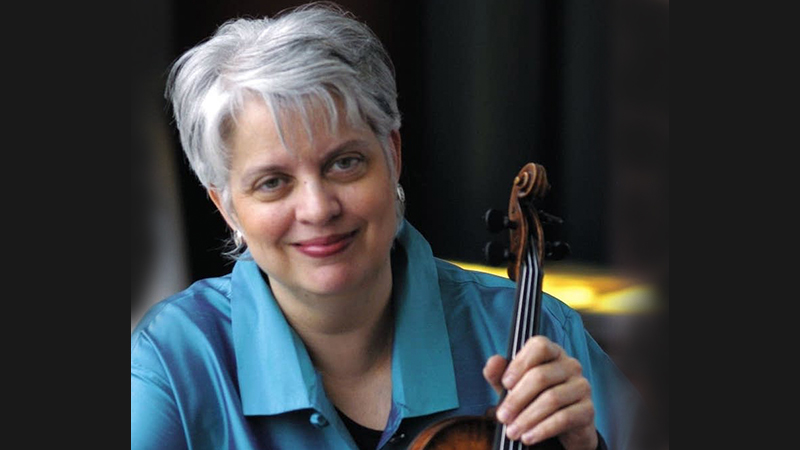 Her impact on the field is undeniable, and memorials abound: a recent obituary in the New York Times chronicles her trailblazing career as one of the first female concertmasters of a major American orchestra (she served as concertmaster of the Minnesota Orchestra from 1989 to the end of the 2008/2009 season). A remembrance on the Chicago Symphony website recounts her "trials" during her reach for a position with that orchestra (which she won in the 1970s after making it to audition finals on three separate occasions). Colleague Stefan Hersh offers a personal remembrance as Artistic Director of Chicago’s Guarneri Hall. And the Minnesota Orchestra’s website offers a truly thoughtfully curated retrospective.

From these tributes and more, it is clear that she was loved and respected for being unapologetically herself: a person who loved and lived music, giving herself to it fearlessly and with the combination of abandon and discipline that is hallmark of every great artist.

It is through my relationship with Jorja that I became a firm believer in the adage that "life has an uncanny way of bringing people and situations together: all you have to do is watch and listen for your cues." While working as a radio announcer/board operator during my undergraduate at Oklahoma State University, I was "on the boards" in 1994 when, during a Minnesota Orchestra broadcast, I heard the premiere of John Adams’ Violin Concerto, which she debuted under the baton of Eiji Oue. There was an intermission interview with her, and while listening I immediately thought "I hope I get to meet her at some point."

Little did I know that I would have that opportunity five years later, while a member of the New World Symphony. While I shall not share the details of that time, it must be said that over the course of a 90-minute conversation, she saved me at a moment when I was seriously considering leaving the field. This was accomplished through her "tremendous humanity," unquestionable compassion, and an unwavering commitment to show that she practiced what she preached: traits that characterize all great leaders.

Jorja’s accomplishments as a leader and champion of living composers is evident through her body of work: she not only premiered the Adams Violin Concerto but also commissioned works by composers including Nicholas Maw. She also was the recipient of the Minnesota Orchestra’s commission of Sir John Tavener’s Ikon of Eros, which she premiered with the Minnesota Orchestra in 2002 and later recorded for Reference Recordings, among many others. Additionally, after the death of her husband Michael Steinberg, she created the Michael Steinberg & Jorja Fleezanis Fund, with the goal of awarding "an annual commission to an emerging composer who will bring together music and the written word."

Jorja’s role as a champion and advocate of young performers is equally unparalleled. She is described by violinist and pedagogue Lydia Miller Choorapuzha as "never questioning the potential of a student, but rather applying herself to creating in the student the same commitment to the page that she felt so deeply in her soul." I have to agree: that first meeting included her "getting me back to work" and strongly advising me to delve deeper, something that I had been doing before beginning the quest for "the perfect Schumann Scherzo stroke." That aside (as she would wryly say), her commitment to teaching can be seen in these videos from the Interlochen Arts Academy, the Jacobs School of Music at Indiana University, the 2013 Starling-Delay Symposium and the New World Symphony.

My last in-person meeting with Jorja was in September 2013: in Annapolis for a wedding, she called asked if we could meet before she flew out. I immediately asked my at-the-time roommate if I could borrow the car (and as the roommate knew about my relationship with Jorja, she automatically said an enthusiastic "YES!"). Jorja said that she wanted to have a crab feast before she left, and shared that her family’s roots extended to Baltimore and included trips from Detroit to Baltimore both to see family members and engage in what is still a beautiful Maryland tradition. That time was so beautiful: we talked about life, changes, the at-the-time ongoing Minnesota Orchestra lockout, and having the moxie to stand up for one’s self and one’s values while being fully aware of the potential consequences.

In recent years, there were many telephone conversations about life transitions, and that included Jorja sharing in early 2020 that she was downsizing, which included the CD library that she and Michael had created. Of course, I said "I’ll take them!" Flash to March 3, 2020: I came home to a huge FedEx box waiting for me, that included so many tremendous gems including Ida Haendel’s 1999 recording of Karol Szymanowski’s "Mythes," which remains my favorite. In the card, Jorja said, "This is a load of music, ALL over the map as promised! Pass on to others what you don’t want - hope you enjoy what you keep."

I’ve kept all of them. While I have yet to get through all of them, I have to say that it was through Jorja’s incredibly generosity that the first three months of the COVID quarantine and shutdown were a musical feast in the best ways, and for that I will always be grateful.

Our most recent (and last) conversation included finally (on my end) planning a visit, during which I would be cooking for her (as I had promised). Clearly, that didn’t and will not happen, but I cannot live with regret, as Paulo Coelho explains in The Pilgrimage. Nevertheless, the next time I make Senegalese peanut stew (which was on the menu), I will put on one of the many recordings that Jorja sent me, take out some music and look at her notes....and while doing so, I’ll remember that "Thank you" is one of the most powerful things that can ever be said, even when those words don’t suffice.

Thank you, Jorja. Rest now, deservedly. While things may be immediately darker due to your passing, please know that the field and the world will grow brighter and brighter because of you.