Live Music During the Pandemic

February 18, 2021, 9:00 PM · How do musicians and music lovers survive without live music during a pandemic? No matter how good the audiotaped or videotaped music is, it’s just not he same as live music. Listening to live music with other music lovers brings an added element of joy and excitement to a live concert. Devoted amateurs can help. I know one expert amateur musician who sets up and plays his guitar solo on his patio at regular intervals. Passersby are more than welcome to drop by, watch, and listen, all for free. I have another friend who plays the bagpipes, a great solo instrument for playing while walking outdoors. On Sundays he walks through his neighborhood or a nearby park and plays for anyone who wants to listen. People pop out of their homes and listen excitedly as he plays. Those who listen are immensely grateful.

In the 1950s, the Golden Era of Television, there was the Bell Telephone Hour with live performances by star solo performers of the era, including violinists Isaac Stern, Mischa Elman, and Erica Morini. The show was available for free to anyone wealthy enough to own a TV. Some of the shows are still available on YouTube or DVDs.

Now, in the computer era, we have many ways to listen to “live” recorded and videotaped music. The possibilities for classical music listening are immense. In a newly published novel, Ballet Orphans by Terez Mertez, a young computer geek in 1989 tries to explain to a group of ballet dancers how they, too, will benefit from the new information era when it happens. Almost everyone will own a computer in their own home. They will be able to use it to watch / study performances of ballets they will dance. More than that - they will be able to watch performances of different ballet troupes or a given troupe performing at different times with variations in the dancers, the live music, the sets, and more. What an invaluable learning experience! One ballet dancer was so skeptical that he laughed out loud and then explained why. He was not a sympathetic character in the novel.

The current pandemic, with its quarantines still ongoing after almost a year, has made the problem very intense. Various professional musicians have responded by making videotaped “live” performances available on the Internet and charging people a modest fee to watch. Joshua Bell has given several of these performances. 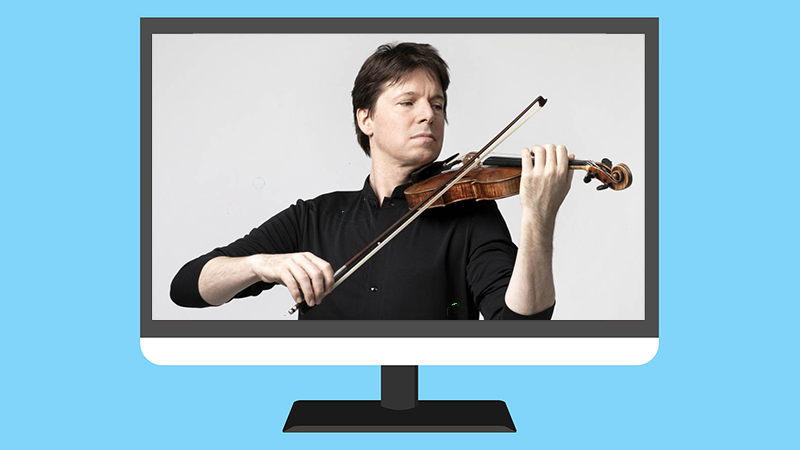 He says a little about the music before playing it, usually with another musician or singer. I have been watching his most recent offering sponsored by the Philharmonic Society of Orange County in which Bell plays violin/piano duets with Peter Dugan. The price is $20 and includes opportunities to rewatch the video as often as you like for a week. This is definitely affordable for many people. For bigger spenders, there is an opportunity for a Q and A session with Bell after the concert for $100.

Bell gave a brief talk, like program notes, about each piece, before playing it. Written programs are also available online.

He started by saying that Beethoven’s Sonata 2 is played infrequently. It lacks the Jovian “thunder and lightning” effects that we have come to associate with Beethoven’s other piano / violin sonatas. Instead it is rather light and airy. My personal reaction to the Beethoven sonata was quite different. To me, it was heavy, almost opaque in parts. It was also long, taking almost one third of the performance time. I listened to it several times and the opacity gave way, at times, to an open, airy feeling.

Bell described Brahms’s Sonata 3 as “stormy” as would be expected of Beethoven. My perspective is different. I have heard this piece many times and I love it. I find it very emotional but not heavy in the sense of being difficult to listen to. It sweeps me away with its beauty every time I hear it. This performance was absolutely captivating.

Next was Bloch’s Nigun from Baal Shem, which sounded so very Jewish. Bloch had written that he was fascinated by the Jewish soul expressed in the Bible and that he sought it in himself and his music. He portrayed it hauntingly in this piece. “Nigun” means song or improvision, and it is transcendent for the listener in the Chasidic tradition. I found it very beautiful, deeply Jewish, and absolutely captivating to my soul.

The next selection, a transcription of Chopin’s Nocturne by Bell, was a beautiful surprise to me. Bell prefaced it with a statement that transcription, very popular in the Romantic era, is almost a lost art today. Bell loves Chopin and he transcribed Chopin’s Nocturne in B flat minor Opus 9 No. 1 for violin with piano accompaniment. I, like many others, have always thought of Chopin’s music as supremely pianistic, but Bell’s transcription sounded as though it were conceived and written for the violin. It was absolutely stunning. It held me and would not let me go. In fact, it was my favorite piece in the entire concert.

Bell chose to end the concert with a flash of artistry and technique, the virtuoso show off piece Scherzo Tarantelle Opus 16 by Wienaweski. It is a very demanding piece for the violinist, and Bell worked wonders with it.

I am so happy that the pandemic has brought us the opportunity to hear such exciting and beautiful chamber music played by Joshua Bell and his collaborators.