September 17, 2022, 10:18 AM · On Friday September 16, my wife, my daughter, and I attended a concert given by Eileen Ivers and her band Universal Roots. Well, it was simply an amazing show. 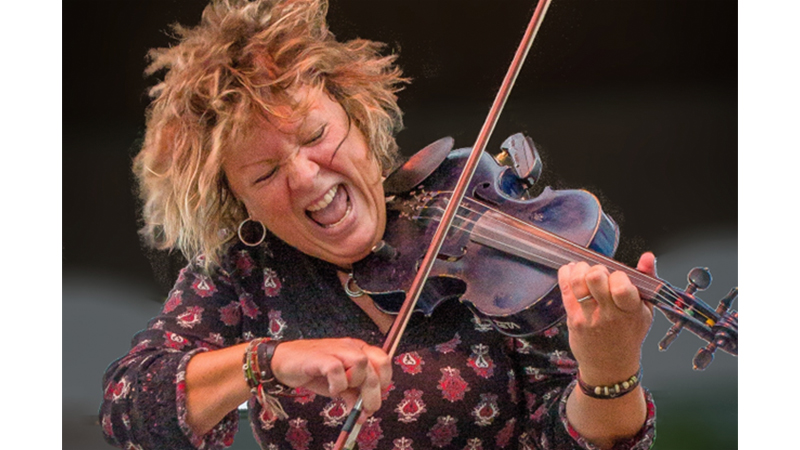 Ivers is a legend of the Irish fiddle, having both sensitive musicality and explosive virtuosity. Her band of multi-instrumentalists included Nature’s gift to the button accordion (doubling on piano/synthesizer), a drummer who also sang and strummed the guitar, a guitarist who took up a little squeezebox for a couple of tunes, and a Juilliard-trained bassist who doubled on the harmonica.

Of course the performance was thoroughly electrified, and the overall sound was what I would call “processed acoustic.” The sound quality was excellent, made all the more so by the peerless acoustics of the Fife Theater, the main venue of the Moss Arts Center at Virginia Tech. Ivers cleaved easily to the modern tools of the trade, including the looper, the fuzz box, and the Cry-Baby.

At the start of the show I thought I would write down the titles of the tunes, which were announced sort-of from the stage, but in the end I put away my pen, as the audience was rowdier than I’m used to and I could not really hear the titles over the din between numbers, and my hearing is compromised.

Overall it was a fantastic show. Ivers read a couple of poems. She zipped around the stage like the cartoon Tasmanian Devil, pairing up with different members of her band to trade 4s, 2s, 1s, and 1/2s, showcasing their skill along with her own. There was a lot of musicianship on display.

The band also performed tunes in various different styles – Irish, French-Canadian, Appalachian old-time, Creole, and South African. That's the "universal" part of Universal Roots, apparently. Some of her forays into these different styles were more effective than others, perhaps because of the finite range of instruments on stage. Her Creole style had some of the right spice -- but I would say it was gumbo without the roux. Maybe I was expecting a sound more akin to Zydeco, which is another thing entirely. On the other hand, her old-time was dead on.

In her encore number Ivers blew a string hard while trying to saw her instrument in half with her bow, and she shouted out “Oh!” But she kept playing on her lower strings to finish out the tune. I think she must have lost her A string because I could see it hanging from her pegbox from halfway back in the center-orchestra section.

If Eileen Ivers and Universal Roots comes to your town, that’s an act not to be missed. My family really enjoyed the show.