Untangling the Violinist's Left Hand: How to Ease the Pressure and Relax

December 29, 2019, 10:36 AM · When is the best time to “reset” the left hand, that is, back to the specifications set at the factory? Later than you’d think. Let’s put the idea of relaxation in perspective. It’s not the highest priority of a violinist, who’s “simply” trying to play the right note at the right time. 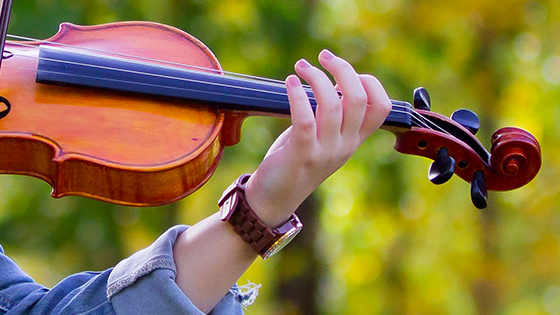 After shifting, vibrating, and double stops, there’s going to be collateral damage. It takes an agile, ready-for-anything mind to juggle ten balls in the air while feeding the technique beasts, let alone adding five balls just to deal with relaxation. I wish I could simply will my hand to relax, but nothing is ever that straight-forward on the violin. (Talking about it, however, is relatively easy to do. It’s fun to explain what goes on when you play the violin. Talk, not action, takes all the pressure off.)

The left hand is inherently more complex than the right hand, since the different finger lengths and varying hand positions aren’t issues in the right hand. Since there’s so much to concentrate on, I learned to be satisfied with just folding in, here and there, small feelings of relaxation. For something I have fought so hard to accomplish, even a few moments of supple, soft, and springy muscles are sweet.

When I work on relaxing, two frustrating side-effects rear their ugly heads. First, I no longer recognize my playing, and second, when I concentrate on one thing, something else goes wrong. Now, how do you mount a strategy against those kinds of obstacles? Remain patient, practice a few measures at a time while observing as many details as possible, and never lose sight of your beautiful sound and phrase contour.

After decades of feeling painful pressure points of fingers against wood, hand positions that teeter over like the Leaning Tower of Pisa, and criminally negligent fourth finger extensions, I feel confident that I can describe what complete relaxation feels like. There is no pressure between the thumb and the fingers. Every new note creates a new hand position, one that is well-balanced and has no fingers intertwined with each other.

Our left hand has many jobs to do, and its ecosystem includes constantly changing conditions, plus pinpoint intonation and vibrato. The odds of numerous flaws and potential paralysis far outweigh the chance of having complete relaxation. The clever violinist finds common-sense ways to manage various movements which, by the laws of physics gone awry, have a tendency to implode and do the opposite of what they’re supposed to do.

The thumb is often inclined to do more than it needs to do, beyond merely supporting the neck. Instead it regularly presses up and assumes a hard, rigid intrusion. When it goes up and stays firm against the downward moving finger, a vice-like grip happens and seeks, often in vain, to find some relief. What goes up should go down, but that’s often the last thing the thumb is capable of doing. The actual target on the fingerboard should simple be a momentary station on the finger’s path, not a place to get stuck on. “Impact” is not a word I associate with finger placement. Picture yourself fingertapping on an iPhone, subtract several degrees of intensity, and you have the right amount of no-impact gravity for the finger action. Put the energy you’ve saved to good use! Apply it to the bow, for starters.

Vibrato often adds unnecessary intensity to the already unwanted hard pressure. To alleviate the developing pain, mentally focus on the specific area. Instruct your thumb to release the pressure. Remind yourself that the pressure wasn’t necessary to begin with. It was just a very bad habit, built up over decades. Removal of even a tiny target of pain is a victory, because you’ve kept your individualistic hand position. The first target of removal is the hardest. The rest will be easier.

A Philosophy of Being Wary of What Could Go Wrong

Stating the obvious, eliminating bad habits, one step at a time, is a successful approach to steady growth on the violin. Stating it is one thing, achieving it is another. When it comes to removing pain and hardness, the reward is well-worth the effort. There are plenty of panaceas, such as “lower the thumb, in order to produce less tension”, or “play more on the fingerpads than the fingertips”, but they may serve more as a diversion than as a way to focus the mind. I’ve never found a pedagogical theory, or gimmick, which did the job of making me listen to myself and observe how much I was falling short of what I wanted to hear coming out of my violin.

My playing was limited by my ability or inability to predict and prepare for the obstacles presented by the violin’s physics. With hindsight it’s obvious that the four planes of the strings were laughing at my repeated attempts to ignore them. The truth eventually came after years of suspecting I was barking up the wrong tree. One teacher, whom I had never met, presented the cold hard facts in such a way that I could feel my brain being re-wired as I read The Science of Violin Playing by Raphael Bronstein. I was the kind of player that needed the direct approach of avoiding the potholes of the fingerboard. Don’t tell me what to do; tell me what not to do.

Raphael Bronstein and the Terrain of the Left Hand

It started with the idea that four fingers in one position on one string will feel different than on the other strings. I had been transferring my muscle memory from one string to the next without making fresh calibrations, hoping for success with as little thinking as possible. The esteemed violin professor from Manhattan School of Music and Hartt College, Bronstein, painted the picture of a left-hand and fingerboard apparatus that was three-dimensional, full of altitudes and variable conditions. He called it visual intonation. He was a student of Leopold Auer and a member of the Glazunov Quartet. His students included Elmar Oliveira, Martha Strongin Katz, and Phillip Ruder.

December 30, 2019 at 01:51 PM · Good article. While I don't necessarily agree with your assertion that the left hand's job generally is more complicated than that of the bow hand, I do agree that left hand tension can be a complicated problem to solve.

The hardest thing for a violinist's left hand to learn is not to succumb to the instincts of the opposable thumb. I start by removing my thumb from the equation, simply "opening" my left thumb away from the neck, requiring my head to hold up the violin and my fingers to do all the note-finding work. Go as slowly as needed to achieve accuracy with relaxation. It doesn't always sound great, but it eliminates unnecessary thumb-side squeezing and gripping.

December 30, 2019 at 06:28 PM · @253, I like your exercise, and removing the thumb completely is a good idea. My least favorite part of the thumb is the hard part right at the joint. That bit of pressure and pain has often taken on a life of its own.

December 31, 2019 at 04:26 PM · Thank you for another wonderful article! I began violin at age 7 and was deathly afraid of dropping the instrument. Fifty-six years later, my left thumb still gravitates to the Vulcan death grip mentioned in another comment (or, as you write, "vice-like grip). When I practiced today, I focused on your suggestion to release one point of pressure at a time -- in my case, the thumb. It really worked, so thank you!

January 1, 2020 at 04:12 PM · @87, The fear of dropping both my violin and bow has never left me. I’m glad it didn’t stop me, or you, from playing, I finally took my shoulder pad off for good, because, indeed, that use to fall often. Fortunately music is beautiful enough that we’ll put with almost anything.

Viola, I’m not sure why my mind can’t fix one thing without another falling apart, but it’s forced me to learn how to juggle and pick up the pieces.

January 2, 2020 at 06:01 AM · The Male human brain only focuses on one thing at a time. When we play loud with the right arm the left hand naturally also clenches, grips harder. When we are working out the fingerings for a piece, in addition to prepared fingerings, which I assume you all know about, we also need to decide when to lift the fingers. Lifting the fingers looks like more work, but it is actually relaxing the hand, allowing greater velocity. One finger down at a time also improves intonation, vibrato, shifting. In fast scale passages in the orchestra literature I try to think about lifting the fingers, not setting them. It's a difficult mental trick. For shifting, release the thumb and press on the chin-rest slightly more than normal during the shift.

January 2, 2020 at 04:07 PM · What I really love about Paul Stein's writing is that he shows you the big picture ("ecosystem" ... what a brilliant conception), but he also guides you through the weeds.

Great tag team this week: Klein and Stein. I love their insight and clarity.

January 2, 2020 at 05:28 PM · Joel, Thank you for your thoughts about lifting fingers, which helps with relaxation. I tend to lift my 4th finger too high, which causes more strain. You bring up good remedies for the violinist’s afflictions.

Paul, Thank you. I appreciate your comments!