March 9, 2019, 10:33 PM · I learned vibrato the hard way. First, I moved the wrist, while nothing else was allowed to move. Then I pivoted the joint next to the fingertip. In and out the joint would click, and it would make my fingertip flexible. Sort of. I was fortunate to be given a lot of exercises. In case one didn’t work, maybe another would. I “polished” the fingerboard by moving my hand back and forth. This taught me that the lower arm moves from the elbow. I also thought about where such a movement begins.

There’s one thing wrong with this picture. It reminds me of teaching someone how to walk. It’s simply not done. We all walk perfectly because we learn it intuitively, not incrementally. A great part of learning the violin is watching what others do and copying it. Vibrato is the perfect technique for learning the skill of copying others, without getting confused by the details.

“A picture is worth a thousand words” and “ten people looking at the same thing will remember ten different things.” These sayings could have been written by a violin teacher, a conductor, or a lawyer. In the case of vibrato, consider the image of someone shaking dice with their left hand. 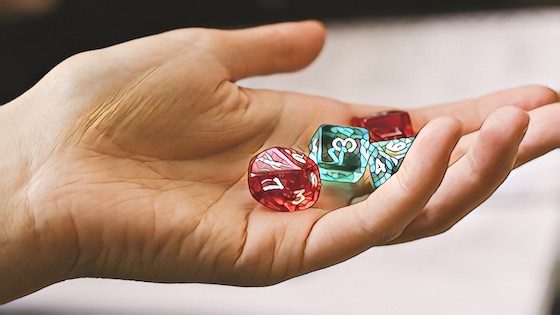 I think this a perfect analogy, unless you’re particularly bad at shaking dice. Students should learn the art of imitating the vibrato motion. That cuts out a lot of “baby steps” and teaches the violin in a method that gypsies, or Romas, are more accustomed to.

Simply stated, a large natural motion unleashes lots of small, unconscious motions. Rather than learn how my fingertip joints and wrist move, one exercise at a time, I just observe the chain reaction that is produced by the beautiful and simple movement of shaking dice. The alternative, like teaching someone how to walk, is time wasted. Teaching the student how to observe and copy reaps more natural benefits.

Holding Air, Not Squeezing the Violin

Of course, holding dice and holding a violin are very different things. Vibrato can easily develop a tight wrist and squeeze the neck; shaking dice doesn’t. Yet they’re the same motion! Another aspect that the two things have in common is that dice need space in which to move. If you compress that space, or squeeze the violin neck, there won’t be freedom of movement. The feeling of holding a shape that surrounds air is precisely what happens when we hold the violin with two or three points of contact.

While we want the sound and feel of the vibrato to motivate the arm into shaking, it often happens that the motivation just isn’t there. Shaking dice has one of the simplest cause-and-effect relationships, and in addition, we excel at it at an early age, without even trying. What I like about using theories and analogies to teach vibrato, rather than exercises, is that the explanation serves to simplify the practicing. There will be less squeezing of the neck if you think about shaking dice. As you practice vibrato, accumulate as many reasons to vibrate as you can think of, because the body is actively trying to minimize the amount of vibrato. Here are some of my favorites:

In my early development as a violinist, I kept doing exercises which inadvertently made me polish bad habits. One of the most difficult things I ever did was try to vibrate rhythmically with a metronome. As I tried to combine two very uncomfortable concepts into one exercise, it didn’t inspire a lot of confidence. Instead of fighting the awkward obstacles of vibrato and metronomes, I wished I had just transferred something I already knew how to do, like shaking dice, into a more skillful vibrato.

Even the dreaded hard wrist that hinders many a vibrato can be eliminated with a thought experiment. Violinists often bemoan the fact that our left arm is held “upside down.”, and that cellists have it easier because their arm assumes “a more natural position”. Instead of this negative thinking, visualize the hand’s position with a different perspective. Gravity is allowing the wrist to freely dangle below the violin. I like to visualize the wrist as a marshmallow connection that lets the hand evolve into the lower arm. The wrist has only one job to do, to react passively to the arm moving from the elbow. Even if you have a wrist vibrato, the movement happens passively.

I love thought experiments. They put things in perspective.

March 10, 2019 at 08:57 PM · It's interesting to read your articles, Paul, because you are free in your thinking and it's noted that you are very observant, and you promote a natural process of learning as far as possible, which means that we shouldn't complicate things more than they are. I started playing the violin very late. I was sixteen. My mother was an excellent pianist, particularly concerning the touch. She could make the piano sing. Both my mother and my sister were opera singers. The music was everywhere, but my mother did what she could, in a gentle way, to get me interested in other subjects than music, because she knew how difficult it was to make a living of it. A very demanding life, she always said. But at sixteen my desire to play the violin was so strong that I've got full support from my mother. That's how it started. The reason for giving this background is that I started to vibrate already after some lessons. I had to give life to the melodies, which I was practicing. I believe it had to do with the environment in which I was brought up. To this environment belonged recordings of Oistrakh, Heifetz, Szeryng, Stern and Grumiaux. They were the ones I listened to again and again. I was trying to imitate their expressive and beautiful sounds. That was what I was doing all the time. I also took the violin as a guitar and glided along the strings; at one point I could get a small, but still vibrating sound by moving my hand narrowly while plucking the string. Both my mother and violin teacher were astonished about the sound I could create. Partly I believe that my wish to create, first of all a beautiful sound, was that I was singing from an early age, and surely because I already was sixteen. I had an idea how I wanted it to sound. So, when I'm reading your article I'm quite happy about your promoting of "imitating". This is how we learn to speak, to play soccer and other important things... Of course, it is important what models we are imitating. But, this is the case with everything.

March 11, 2019 at 12:40 AM · Ariel, your story is very inspirational. Imagine how many thousands of violinists had the vibrato of Grumiaux ringing in their ears. One of the difficulties of being a musician is that it’s easy not to hear what’s really coming out of your instrument. However, I noticed that when I was really honest about what I sounded like, that’s when the real work began.

March 11, 2019 at 01:46 AM · It is indeed very difficult to hear and judge one's own sound. It stays a difficulty. Both the violin and the viola are so close to the ears that we hear the sound in a way that only we can hear. I don't think it's a question of being honest with oneself. I believe rather that it is something that we must learn all the time - to listen to ourselves. And, of course, listen to ourselves with the greatest care. It's a life-long education.

I remember the first time I recorded myself; just to get an idea. It was awful, because I thought I sounded much better. Today, when I'm recording myself, I have at least an idea what I'm going to hear. All this is a work that never stops.

March 12, 2019 at 07:45 AM · Thankyou so much Paul, this was the light bulb moment to get my vibrato going. I have tried other methods without any real sucess. Then this evening I thought, why not try this shaking a dice and wah lah it worked.

March 12, 2019 at 05:48 PM · Wonderful article and very helpful! I realize your topic is vibrato, but I've been working on vocal trills of late and much of what you say applies in that category as well. For example, I was trying to gain trilling speed by use of the metronome. It was an absolute disaster! When I revert to a less technical approach -- what does a good trill sound like in my ear -- I am much more effective. I keep reminding myself of the old story that Joan Sutherland learned to trill by listening to the birds and then imitating them! I'm also going to try the dice trick for my vibrato. Thank you!

March 12, 2019 at 07:26 PM · Norm, I’m so glad the vibrato exercise worked for you. It’s a skill that just keeps stronger the more use it. Just recently I thought about the idea that vibrato is more about sound enhancement than simply changing the pitch in a rhythmic manner. My ear could relate to that better. I’ve always had a hard time hearing the vibrato per se, even though I knew it was there.

Diana, Thank you for bringing up Sutherland and her imitation of birds. I own The Backyard Birdsong Guide by Donald Kroodsma. I often have my students listen to a sample to help them. My favorite is the Hairy Hummimgbird. It’s not a pretty sound, but it’s rhythmic and functional. Most of the beauty come from the bow.