Nature and Music - A Violinist Discovers a Quiet Space

December 30, 2020, 1:13 PM · You can count the number of performances of Frederick Delius’ music by the Los Angeles Philharmonic on one finger, and same for the Berlin Philharmonic, whom I follow often on their Digital Concert Hall. Nevertheless, by some accident of fate, I began to listen to his music a little bit at a time before I realized I was hooked. On Hearing the First Cuckoo in Spring and Brigg Fair helped me escape into a world of classical music that had none of the usual associations I had with the general repertoire. They certainly weren’t on any audition list.

I made a YouTube video that combined photographs and “Winter Landscape” from North Country Sketches.

Through images the music came alive more than I could have imagined. Even the images looked more vivid because of the music. Then I collaborated with pianist Leo Marcus, and his desire to play all the Reger sonatas fit perfectly with mine to play all four of Delius’. We played them at the Santa Monica Library in the space of four years.

Even though Delius is rarely performed in the U.S., I am heartened by the great interpreters of his music. John Barbirolli, Thomas Beecham, Mark Elder, and Tasmin Little have left an enormous legacy. Little has produced an excellent two-part documentary on YouTube about Delius’ time in the American South and his love for a woman.

Focus on a French Town

Through YouTube I became acquainted with many wonderful visual associations that illuminate music. I had known about the historic French town where Delius lived in the last half of his life, but I wasn’t prepared for the rush of feelings a particular video would elicit.

Thirty-five miles from Paris is Fontainebleau, and from there it takes twelve minutes by bus to get to Grez-sur-Loing, a popular destination for French landscape painters. The low Roman bridge and the magnificent river invited them to capture the shimmering water and the subtle colors of sunset. 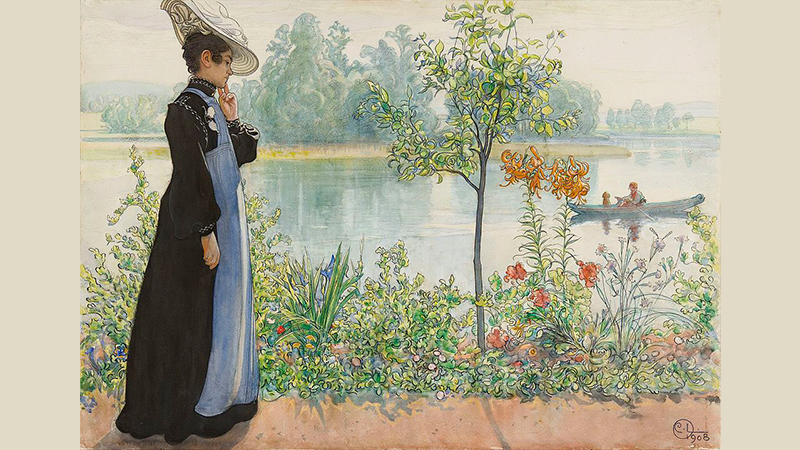 If it hadn’t been for my love of Delius’ music, I would never have heard of Grez. Debilitated by blindness and paralysis, he and his wife Jelka lived there for 38 years. In the last six years of his life, Eric Fenby served as his amanuensis, writing down Delius’ final works. That unique experience among composers was made into a movie, Song of Summer, by Ken Russell, whose film subjects include Tchaikovsky, Mahler, Vaughan-Williams, and Debussy. Considered his finest movie, it captures the difficulty Fenby went through to work with the always demanding Delius.

A Moment of Awe and Revelation

It was through a YouTube video that I discovered what had been missing in my musical perception. The landscape of Grez and the emotional source of the music came rushing at me.

There was such a contrast between all those feelings and my usual connection with music. Between practice time and live performances, countless logistical details and enough competitive distractions to drive out much of the pleasure, I realized I needed a safe harbor away from the mind-boggling routine.

When I happened upon this video, I had never heard Delius’ Idyll Printemps before, nor had I seen the photos of Grez. I experienced all at once the most intimate sounds and harmonies, the subtle shades of the landscape, and a unique creative energy. It was as if the peacefulness in the opening chords, the unfolding of its pastoral nature, and the vision of Grez all came rushing at me. I had never been able to see and hear all of that before, but after this experience, I knew what to look for in the future.

December 31, 2020 at 01:24 AM · Excellent blog. I have always thought that underrated Delius had a distinctive musical voice.

lovely blog. I think I hacked my way through the C major sonata in college. It was fine, quirky music. The orchestral works tend not to be popular for some reason. I think some art can be appreciated more from the kind of holistic perspective you are taking. IT reminded me of Martineau’s violin works . I didn’t really appreciate what his violin pieces were about until I learned about his childhood spent largely in a very high tower communing with the sky more than the ground. Doing some research is a part of performing which is all too easy to forget.

December 31, 2020 at 04:42 AM · Corwin, his uniqueness came from not accepting anything his teachers had to say. Except for Thomas Ward, an American organist with whom he studied for 6 months.

Buri, I love the story about Martinu’s upbringing. I often hear in his music the steady clomping of walking up and down the many stairs of the bell tower.

December 31, 2020 at 03:30 PM · What a beautiful article! Thank you! I had the good fortune to play "Cuckoo" when I was in college. Then in graduate school, my opera director loved "A Village Romeo & Juliet," so we did scenes from that lovely work. At that young age, I simply believed Delius was part of the standard repertoire. Little did I know then that I would not have an opportunity to perform his music for the next 40 years. I'm appreciative that you have reminded me of the great beauty Delius offers.

December 31, 2020 at 04:55 PM · Thank you, Diana. I found over 125 performances on YouTube of Cuckoo alone. Delius’ music has found a home there, and his audience can enjoy many hours of listening. The videos accompanying him are often beautiful.