Melodious Etudes - The Art of Legato Playing for Violinists

May 9, 2020, 11:43 PM · If you are looking for etudes that will help you hone your expressive and melodious playing, you might want to look beyond Rodolphe Kreutzer's famous 42 Studies.

Kreutzer’s Etude #1 of the 42 was an attempt at a melodious etude. It is not the etude that most people remember. It’s aggravatingly slow and has an uninspired melodic theme. I doubt that anyone started his 42 Studies with #1. The main purpose of etudes is to instill patterns and formulas into budding musical minds. #2 satisfies that with lilting one-octave arpeggios and tiny broken thirds. It sets up simple phrases that teach us how to add dynamics when there aren’t any written and how to observe a measure by its arc rather than its notes. 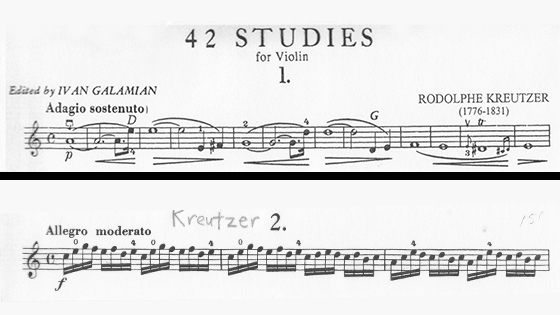 But Etude #1 -- I call it Kreutzer’s "Long Day’s Journey." (It may be as long as the other 41 studies combined.) I would have preferred something with a tune that was actually melodious. What’s missing is the ease and emotion connected to melodies which make them so endearing to us. 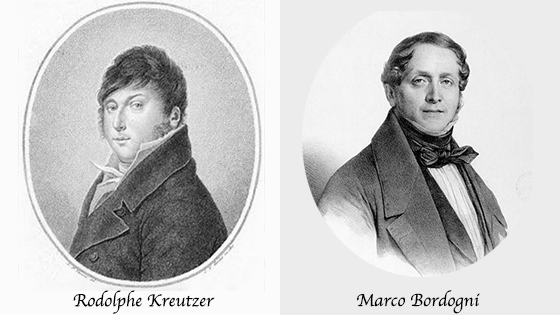 Fortunately, there is a book designed to make lovely melodies useful as a teaching tool. The Melodious Etudes for Violin, Selected from the Vocalises of Marco Bordogni (Carl Fischer) are edited by Doris Gazda. I find them well suited to developing a warm, rich sound. Practicing these 15 minutes a day rounds out the vibrations of the strings and encourages a healthy vibrato to match the expressive bow. 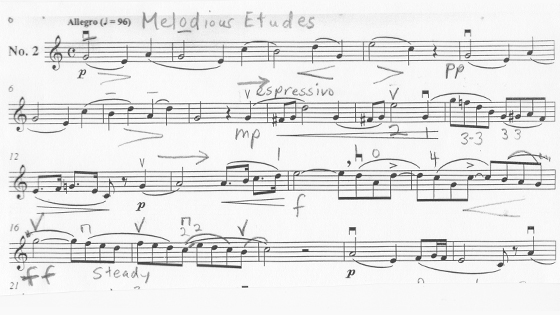 A Tenor Who’s a Teacher

Let’s absorb our knowledge of legato from a tenor who understands that dynamics, tempo, and texture change with every dramatic turn.

Putting life into a melody requires attention to certain details which may or may not come naturally. This list of reminders helps me start the melody with the right attitude.

Knowing When to Pick Up the Tempo

If you’re like me, sometimes the rhythmic nuances that the composer felt was obvious slips right by me. A melodious etude trains us to see the beginning of a sequence that builds to a climax. A diminuendo may start on the last measure, but the music implies that you should start earlier. Even if you’re a metronome junkie and a bit of a robot, you can learn the skill of bending to the will of the music.

The greatest skill of all time is to be able to lead and follow at the same time. For most of us mortals though, it’s enough that we follow the will of whichever group we happen to be in. We can derive a lot of satisfaction from that. There are three benefits:

Making music is not about bending other people to your will, but about everyone finding the common thread.

This is also an opportunity to point out that Mazas's studies are also excellent material for this sort of learning; he too had a gift for melody.

May 12, 2020 at 05:23 AM · Kreutzer # 1 is also symbolic of the big change in equipment and bowing style that happened gradually 1780--1820, with the universal acceptance of the Tourte model of violin bow. Kreutzer #1 is impossible with the older, lighter and shorter Baroque bow. An apocryphal story that I have read somewhere but can't substantiate is that when the young Wagner was in Paris he was impressed with how the orchestra strings were bowing, with the long sostenuto melodic line. It affected his composing after that, breaking the "tyranny of the bar line"

May 12, 2020 at 11:58 PM · Joel, I’m a huge fan of apochryphal stories because they usually give us insight and are really interesting. I’m not surprised at all that Wagner talked about the “tyranny of the bar line”, a quote that’s as good as his famous statement about Beethoven’s 7th Symphony being “the apotheosis” of the dance”. Thanks for clarifying why Kreutzer may have place the slow etude at the beginning of the book.

May 13, 2020 at 12:02 AM · Edward, I can’t think of a better instrument to benefit from Bordogni than the trombone. Those wonderful long Mahler melodies need a lot of breath and real planning. The Bordogni books still in print are for viola, violin, cello, and trombone.