July 1, 2020, 12:35 PM · I empathize with anyone who has trouble following a metronome because of the complications I faced when I started using one. Unlike watching a conductor who shows a slight broadening of the phrase, the metronome’s version of rhythm was robotic. When I had trouble following a metronome, I’d rationalize it by thinking I was too human to follow it. However, there was no getting around the fact that I had rhythmic problems, and one symptom was having trouble playing with a metronome. 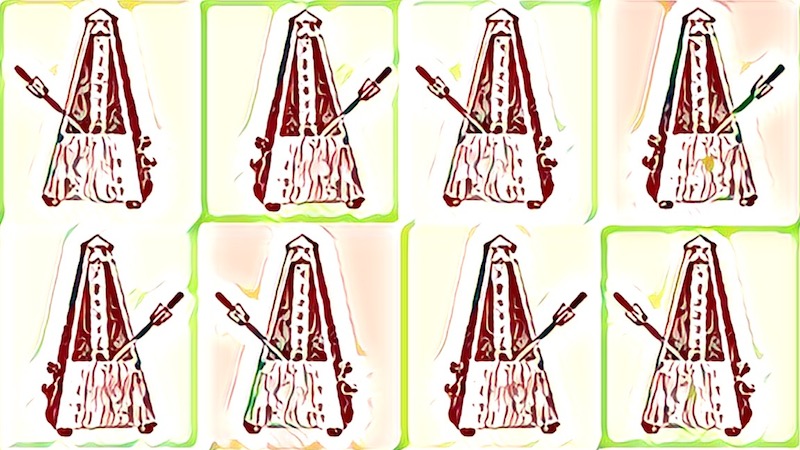 Nevertheless, I considered it a rite of passage to learn how to play with one. Since I wasn’t born with an ear that laid out the rhythm as Mozart had intended, I had to partner with something to keep me on the straight and narrow. The metronome was my first stand partner.

The Fluid Rhythms of Szeryng and Boulez

As I look back, I realize there was a large gap between metronome rhythm and what actually happened in “real time.” My first exposure to great performances was listening to many classical pieces on WRR-FM in Dallas and hearing Henryk Szeryng play Lalo Symphonie Espagnole on my record player. What more do you need?

In a nutshell, Szeryng’s recording taught me that real time consisted of very orderly rhythms presented in an imaginative and spontaneous way. Unlike a metronome, subdivisions in the recordings were provided with the appropriate articulation. Even vibrato among the players seemed to match. Anticipation of one phrase leading to the next demonstrated musical common sense, not the one-size-fits-all that defines a metronome.

How could two things that felt so different be part of the rhythm family? It reminds me of a story Daniel Barenboim told about Pierre Boulez in his book Parallels and Paradoxes. Barenboim was conducting the world premiere of his Notation VII and the metronome mark was over 50 percent more than they were playing it. Boulez was happy to change the marking. When Barenboim was surprised that Boulez could change something that radically, Boulez said, "This is very simple. When I compose I cook with water, and when I conduct, I cook with fire."

In comparing the metronome to real time, I felt that so many essential elements were missing from the metronome that it almost defied you to play along with it. On the other hand, it was an incredible invention. Like tape on the fingerboard, the metronome helped me enter the inner sanctums of music and violin playing.

How To Fix the “Never Fast Enough” Syndrome

There is an interesting phenomenon shared by all great performers, that they have a generous amount of time to play every measure. They have time to make the proper transitions from slower to faster sections. There is always a moment to frame up what’s coming up next. On the other hand, if I didn’t plan out each successive measure, fast sections would keep getting faster and faster., an effect that resembled snowballing 16th notes. The other by-product of not planning ahead was that slow sections would not be slow enough. This made me realize that, in real time, I couldn’t count on the beats staying exactly the same. In fact, I needed to prepare for them to be different

It’s scary to feel like the beats are getting faster and faster while playing lots of 16th notes. When that happens, I stop the runaway train and start again with the tempo 5-10% slower. Interestingly enough, the new tempo usually turns out to be the correct one. Like Boulez cooking with fire, the new slower tempo would reflect what it would feel like to play the piece not alone, but with colleagues.

When I hear a great performance of Mozart, I hear eighth notes and dotted rhythms that float in the air. If I play them in a plodding, metronomic way, it’s because I’m treating music as I would a calculator. I realized that the bottom line in music is different than one on a spreadsheet. The rhythmic purity lies half-way between playing with a metronome and playing in real time.

To balance this contradiction, I like to create the phrase in my mind and in my playing without any help from a metronome or a colleague. I play once in a leisurely way without the metronome. making sure that the many changes of rhythmic figures are proportional to each other. I try not to lag behind on dotted rhythms and avoid rushing triplets in relation to quarter notes.

After a bit of trial-error, I try to arrive at an interpretation that I can bend to any possibility. The true test of a healthy, elastic phrase is if I can accommodate it to whatever musical demands are being thrown at it.

July 2, 2020 at 02:11 AM · Thank you very much for sharing this helpful information and for your openness about trouble following a metronome. I'm using one now and struggle with 1/8th notes...I speed up and lose the beat. I appreciate your recommendations and direction, and will keep working to improve. Thank you!

July 2, 2020 at 02:29 PM · I will be taking the metronome into my practice room today and will give those exercises a try. Great article!

July 2, 2020 at 10:29 PM · @25, When I play 8th notes with a metronome, I find myself concentrating literally from beat to beat. When I finish one beat I start thinking about the next one. If I’m rushing the 8ths, it means I need to remind myself of the squareness of the beat. I also have learned that the beat comes sooner than I imagine.

Thank you, Diana. Maybe naming your metronome will make it a more simpatico stand partner.