March 29, 2021, 1:37 PM · Two things attracted me to the violin when I was eight - vibrato, and the beauty of sliding from pitch to pitch - also known as "glissando." Those techniques caught my ear in the subtle ways in which they altered the shape of the sound and the music. When I tried to slide, however, my rhythm, sound, and intonation suffered.

My ear heard a lovely, gentle transition and, unfortunately, my left hand and bow arm turned to mush.

A glissando needs conviction and continuity. If the slide causes the left hand foundation falls apart, it won't work. It's important to maintain the foundation, then slightly modify it to create the proper conditions for the slide. Nuance, structure, and strength work hand-in-hand. Here are some ideas for producing beautiful glissandos while keeping a safe and sound foundation.

Bumping up and down the fingerboard is neither graceful nor rhythmic. To avoid that, lay the groundwork for the slide by being aware of the whole steps and half steps within the shift. After that, a little imagination shows the distance as pure space, simply an arc, like a rainbow with perfect proportions. 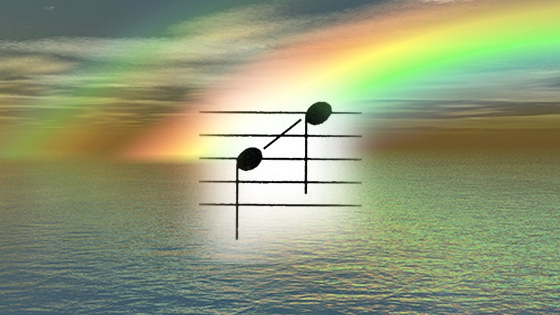 Slides and Shifts Are Almost the Same Thing

A beautiful glissando should have all the same ingredients as a straight-forward shift. The main difference is that the slide is slightly slower. Feeling the similarities makes it easier, rather than thinking about a series of technical hoops you have to jump through.

Concentrate on hearing only two pitches, the starting pitch and the ending pitch. As for the pitches in between, as long as the slide is smooth and the bow doesn’t accidentally accent, those numerous pitches will do no harm. (I marvel at the elegant physics that make the pitches in-between the first and the last of the slide non-obtrusive.)

Sometimes the slide can sound overdone and bottom-heavy, that is, you accent the bow and hear an obtrusive pitch in the middle of the slide. To avoid this, be careful to gloss lightly during the majority of the glissando and focus on the end of the slide as the expressive part. The closer to the note, the better.

The Left Hand’s Balance Board

Glissandos can weaken the balance that the hand needs to maintain while sliding - in fact, falling off the edge of the E string or G string side is not unheard of. To "stay on top of it," so to speak, try these guidelines:

Staying in the Groove

To avoid losing contact with the fingerboard during a slide, it is important to "stay in the groove," that is, to feel comfortable and secure with this movement while holding the violin. Here are two things to keep in mind that may help:

Pitches that are Clear and Obvious

Clarity is important to a successful glissando. Since there are so many pitches between the beginning and end of a slide, be aware of the following:

March 31, 2021 at 11:28 PM · That’s a good idea, John. It kills two birds with one stone: the vibrato is ready to go when you reach the destination, and the vibrato has a big effect on the sound during the shift. Vibrato is never a bad idea!

The glissando, audible slide, and its close cousin the portamento-shift; it is like the spice on a meal, just the right amount is wonderful, too much is--too much. It is out of fashion for symphony auditions, you want to sound clean and accurate. Fortunately the historically informed performance attitude is now being applied to the 19th century repertoire.

I suspect that you and I have different technique. Not right or wrong, just different. And your CV is 2 leagues higher than mine.

"Stay in the Groove"- yes , literally. If you press down on the E string, you will see a diagonal groove on the fingertip. When we shift we want the string to stay in that groove, without twisting or tilting, maintaining the same angle. But stay off the wood while moving. Having the finger down on the wood gives one the glissando when desired, but increases the friction, especially with the stress of performance; the shift can land flat. That's why I prefer switching fingers while shifting; it forces me to release the left hand. Meanwhile the right arm does the opposite, maintains the traction during the shift. Paradoxically this does not cause any extra noises during the shift. -jq

April 3, 2021 at 04:24 PM · Joel, I agree wIth you about orchestra auditions: when in doubt, don't slide. Instead of sliding, play with the most beautiful sound you can produce with your bow. But it would help if you put in a traditional slide in a Strauss tone poem.

The reason I maintain some contact with the fingerboard when sliding is because it's what I'm used to. It doesn't produce an unseemly smear because I eliminate as much friction as I can. I appreciate how you manage the violin to meet your needs. I do that as well.

Diana, the spice of a slide reminds me of Itzhak Perlman's many analogies to food when he is teaching. Now, if I could just come up with musical tidbits relating to meat loaf and French fries, I would be very happy.