February 14, 2022, 1:50 PM · When I was a beginning violinist and started learning how to shift, it never occurred to me the importance of knowing the fingerboard. I concentrated instead on what my hand felt like, rather than the target and my fingertip. And I relied on my ear, in placing my fingers, once in position.

I have since learned methods that helped me focus on knowing the fingerboard - and turning that knowledge into well-ingrained muscle memory. There were two books that helped me with shifting, Introducing the Positions by Harvey Whistler (Rubank-Hal Leonard) and Shifting the Position, Opus 8 by Otakar Sevcik (Schirmer). The first one nudged me out of first position, which I did reluctantly. The second one made it very clear that the fingerboard needed to be divided and conquered. New rules!

Sevcik presents intervals in bite-size form, one measure of whole and half steps. The efficiency of this method is demonstrated by each successive measure, starting in the next position with almost the same intervals: 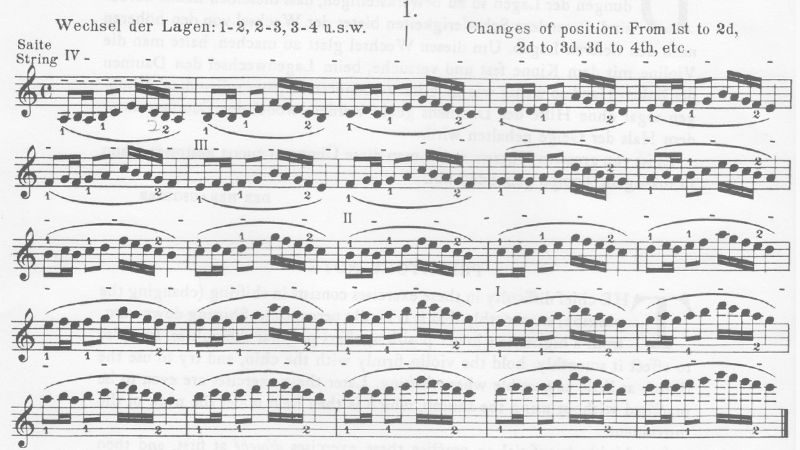 You can go up the fingerboard as far as you’d like, with the added advantage that your ear already knows what to expect from the sequence. Finally, shifting gives you the opportunity to learn where all the fingers need to be. Sevcik shows that you need to measure intervals, and the process feels like you’re rewiring your brain. Progress!

Mentally Marking Up the Fingerboard

The fingerboard is as spatial as an architect’s drawings. You can let your ear guide you for a while, but eventually it's important to map the fingerboard in your mind - to know the spaces between shifts and intervals between fingers. Sevcik gives numerous examples of small and large intervals.

Looking at the example above, each beat includes eighth notes or sixteenth notes, so there’s a moment when two or four pitches have to be measured, in terms of finger placement. Sevcik’s music may look dense, but the intervals are musical and violinistic. When it comes to the shifts, be careful not to overlook the accuracy of the first finger, because the small building-block intervals depend on the first finger’s correct placement. Those little details make a big difference. Here are some of the most important details to consider:

1. Targeting the shift. There’s a tendency to think the target is bigger than it really is. Fingertips are very big compared to the pinpoint area of the pitch. It’s better to place the finger firmly, guided by a strong, rhythmic beat. If your counting is vague, and the finger wobbly, the pitch will need an adjustment. Also, a little fudging will become part of your technique. To avoid this, have your ear and your movement in sync. Know in advance of each shift where you’re going to land.

2. Measure up to shift down. I can only speak for myself, but I noticed that shifting down was more difficult than shifting up. The reason was because I didn’t know how to measure backwards. Then I realized that it was a skill I didn’t need to learn, like walking backwards. Because of the nature of space on the violin, it is possible to measure up from the nut, even when shifting down. Since shifting is a game like hopscotch, space can include up, down, and sideways (string-to-string). Measuring in only one direction takes away the difficulty of "backward measuring."

3. Repeat for muscle memory. Repetition is always a crucial factor in retaining muscle memory. I like to play one measure at least four times in quick succession. If I stop too many times, I lose the rhythmic drive which defines the movement of the fingers. Stopping also unleashes doubt, a big cause of weak intonation. Finally, the quickness of repetition helps me assess how sharp or flat I am. In the quick world of shifting, the ear guides my finger the next time I play the same passage.

Is there a way to fit so many details within a shift without feeling overwhelmed? The bad news is that, when you arrive in a new position, you have only a moment to know where to place all of the fingers in that position. The good news is that you can practice a full minute or two to plan it all. You have to get into a slower groove of thinking. The conscious effort you make in practicing shifting and finger intervals results in unconscious knowledge - your concept of the fingerboard will be transformed. It rises to the surface in an easier manner, since the foundation has already been created.

February 15, 2022 at 03:17 AM · Great post Paul! My first teacher had me work through Introducing the Positions years ago, and I also like the idea of always shifting down from an upper reference point. I think the general idea of a reference point is useful for students learning the fingerboard, whether it is the nut for shifting, or leaving a finger on an adjacent string to use for reference when crossing strings (e.g. A to D or vice versa).

February 15, 2022 at 04:00 AM · Richard, I’m a big fan of reference points as well. The early shifting exercises would include brackets to remind you to keep a finger down that recurred a lot. And I love tape for students-the bigger the better so they’re easy to see. I’m not sure if tape is controversial.

February 15, 2022 at 03:56 PM · Tape is approximately as controversial as the Shoulder Rest. Hopefully this thread will not go down either of those rabbit holes.

I also think an intermediate student who wants more comfort with the fingerboard can hardly do too many studies that involve small shifts like the one in the picture. I found that many Dont studies have a lot of small shifts too and I did a lot of those, to my advantage. In my experience it's of utmost importance to re-establish a natural and comfortable hand-frame after a shift. You don't want to feel like 10% of your hand is still in first position. :)

February 15, 2022 at 05:46 PM · Paul, the fingerboard is like any vast or small area that has no landmarks - it begs for organization. Half-steps and whole steps are the best place to start. In fact, larger shifts can be viewed in the same way as the smaller ones, because they’re all space to be jumped. To

a bass player, jumping a fifth or an octave is a walk in the park.

Speaking of organization, Temple Grandin made a career out of her ability to dissect and delineate open space. She is an American scientist and animal behaviorist. She is one of the first autistic people to document the insights she gained from her personal experience of autism. She studied the humane treatment of livestock for slaughter.

From the New Yorker: “I can do anything the computers in Jurassic Park do. I can do all that stuff in my head...I actually have that machine in my head. I run it in my mind. I play the tape-it’s a slow method of thinking. “

The relationship between space, musical direction, magnetism, and the ear all add up to accuracy on the fingerboard.

BTW, thanks for your chili recipe. I really enjoy it.

February 15, 2022 at 06:46 PM · Before I took up violin I played mandolin (and still do in bluegrass jams when the regular mandolin player is away). My mandolin teacher drilled me on harmonized scales; the violin equivalent would be double stops shifted up and down the neck (in both sixths and thirds). Since the mandolin's neck is the same as a violin's (except for the frets), I was able to transfer this knowledge to the violin and get a head start on shifting and positions.

February 15, 2022 at 09:25 PM · Charlie, your experience make me think that double stops should be started earlier than usual.

February 15, 2022 at 11:11 PM · Thanks Paul, When asked why the violin does not have frets, (like the mandolin), my answer is, "so we can play in tune". I also went through that Sevcik Op. 8 book as part of my training. I don't know why, but an especially important and difficult one is #16, shifting over a perfect fourth on the first finger. The only flaw in this book, in my opinion, is that he does not make a clear distinction between shifting 1/2 or whole steps, minor and major thirds, etc. Because of that it is important to do them in other keys, not just in the printed C maj. To my mind being aware of the interval between the positions is more important than how you mentally label the positions. We naturally start to gauge them with the first finger, but that becomes inadequate when we change fingers during a shift. What causes more confusion is that the first finger, or any finger, can extend or contract a half-step within any position. Cellists have a clearer fingering system; one finger for each half-step, and positions labelled by half-steps.

Shifting down is definitely more difficult than shifting up. It feels like you are pulling the violin out from under your chin. Or, if you release all contact to avoid that, landing on the right spot is a gamble, like throwing darts. I find that I frequently dive all the way back to third or even first position.

February 16, 2022 at 12:42 AM · Joel, In reference to the first finger changing its position, it makes the balance of the hand feel considerably different. To keep the hand strong and centered, I like to think of a light, compressing motion. It keeps the hand from being too floppy.

February 16, 2022 at 10:04 PM · Thank you for this wonderful post Mr. Stein! When discussing Ševcik it is important to read and include in discussions the book "How to Practice Ševcik's Masterworks" by his student A. Mignotti because that is the way to understand Ševcik's intentions with his opuses, including Op. 8. Thank you all!